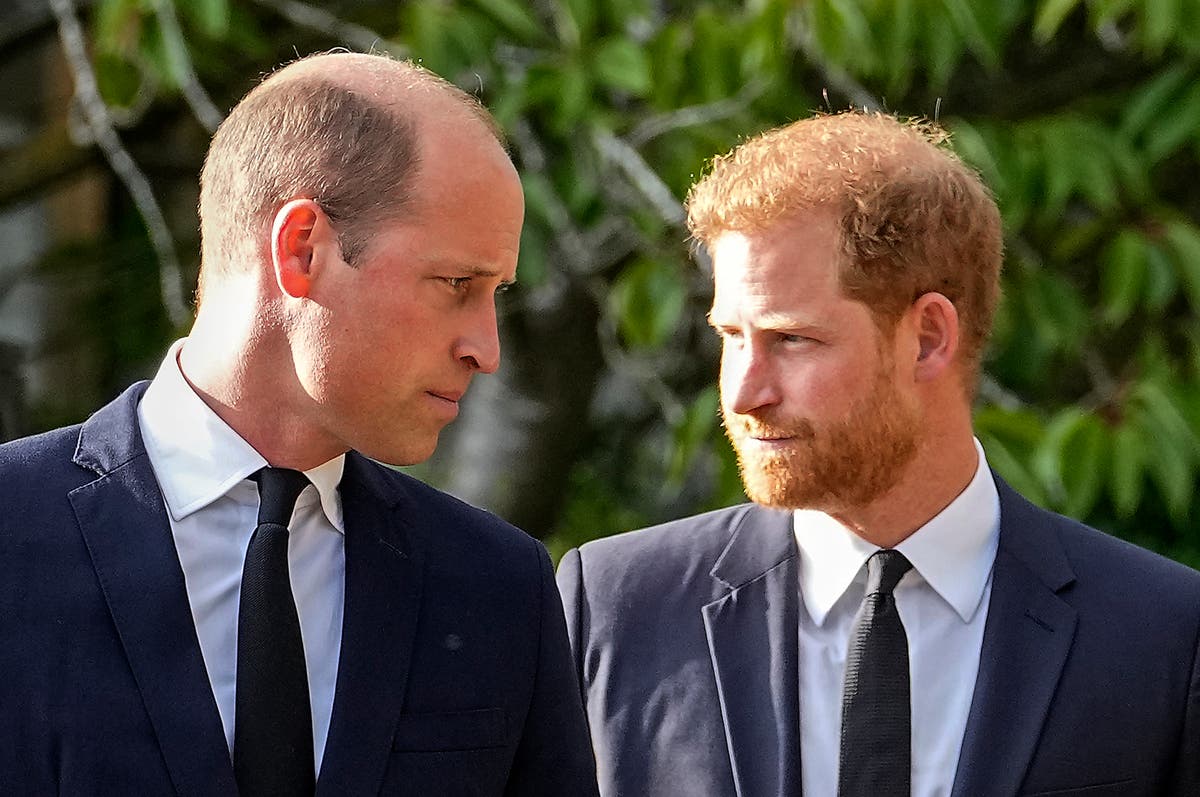 Prince Harry: My heartbreak over bitter feud with William

Prince Harry has told of the “heartbreaking” rift with his brother as he spoke about how they drifted apart.

In a series of new claims against the royal family, the Duke of Sussex alleged that William “screamed and shouted” at him during the “Megxit” crisis.

He also criticised his father, now King Charles, and says the Queen “quietly sat there” amid the family turmoil. Buckingham Palace has not responded to the allegations being made by Harry in his six-part Netflix series, which is believed to be netting him millions of pounds.

He gives his own account of what happened as he and Meghan grew apart from the rest of the royal family before eventually moving to live in California. In the fourth episode of the Harry & Meghan blockbuster, the duke claimed that offices within the royal family worked against each other, “leaking” and “planting” rival stories in the media to protect their own “principal”.

He said: “William and I both saw what happened in our dad’s office and we made an agreement that we would never let that happen to our office. I would far rather get destroyed in the press than play along with this game or this business of trading.

“And to see my brother’s office copy the very same thing that we promised the two of us would never ever do, that was heartbreaking.”

Harry also claimed the palace “lied” to protect his brother’s reputation after the growing rift came to a head during a meeting at Sandringham on January 13, 2020, which he alleged was deliberately timed so that Meghan would not be there.

“It was terrifying to have my brother scream and shout at me and have my father say things that just simply weren’t true and my grandmother quietly sit there and sort of take it all in,” Harry recalled in the fifth episode.

He also spoke of the “wedge” between him and William and being disappointed that his brother was “now on the institution’s side”.

When stories appeared in the press about William allegedly treating Meghan badly and “bullying” his brother, the palace released a joint statement from both princes denying the claims. “No one had asked me,” Prince Harry said. “No one asked me for permission to put out a statement like that.”

He added: “Within four hours they were happy to lie to protect my brother and yet for three years they were never willing to tell the truth to protect us.”

Harry and Meghan signed lucrative deals, thought to be worth well over £100 million, with the streaming giant and Spotify, after quitting as senior working royals in 2020 following the rifts and struggles with royal life.

In a series of other claims:

*  The Duke of Sussex told of the “bonkers fall-out” after Meghan revealed that she was “struggling”, during an interview with ITV’s Tom Bradbury in South Africa in October 2019. “When you would expect support from the people closest, we got the opposite,” he alleged.


*  He told how he “hated myself” for not giving his wife more support when she had suicidal thoughts, saying he had responded as “institutional Harry, as opposed to husband Harry”.


*  The Duchess of Sussex claimed she was not protected from the media by the palace, alleging she was instead “fed to the wolves”.


*  She accused a former royal aide of comparing her to a “foreign organism” who attached herself to a “fish that is swimming perfectly [and] on the right current”.


*  Harry said “there was no other option” but to leave the UK after the fallout from the meeting at Sandringham as it was clear that his “half in, half out” plan to continue as a working royal would not be accepted.


*  The Duke of Sussex said it was his decision to step back as a working royal, not his wife’s, and slammed some claims to the opposite as “misogyny”.


*  Harry says he told his father, now the King, that he and Meghan were willing to relinquish their Sussex titles if a move to Canada did not work out.

He spoke about the moment when “the penny dropped” for Meghan when she appeared on front pages after an event attended by all senior royals.

“The issue is, when someone marrying in should be a supporting act, is then stealing the limelight or doing the job better than the person who is born to do this, that upsets people,” he said.

Asked about what it was like returning to the UK for the Duke of Edinburgh’s funeral, Harry said: “It was hard, especially spending time having chats with my brother and my father who just were very much focussed on the same misinterpretation of the whole situation.

“I’ve had to make peace with the fact that I’m probably never going to get genuine accountability or a genuine apology.”

Buckingham Palace and Kensington Palace have not responded to the slew of claims by the Duke and Duchess.

Meghan said she felt free to finally wear colourful outfits during her royal farewell tour in the UK.

In the fifth episode of their Netflix series, Harry described the final week as a “real whirlwind”.

He said: “That farewell week we did all these engagements back to back. It was a real whirlwind.”

Meghan added: “Until that last week in the UK, I rarely wore colour and I never wanted to upstage or ruffle any feathers, so I just tried to blend in.

“But I wore a lot of colour that week, I felt “well let’s just look like a rainbow.”

The duchess also said the British public “were sad that we were leaving” as the couple recalled their farewell week as working royals in the UK in March 2020.

Harry told episode five of the Netflix documentary: “We weren’t with the family. It was our opportunity to go out with a bang to be honest.

“It never needed to be this way. We talked about this over and over again, sitting up late after these late-night engagements saying: ‘We would have carried on doing this for the rest of our lives’.”

Meghan said: “I thought ‘the public - they’ve been fed these lies about me for two years. What do they think of me? They must hate us’.

“I’m going to miss this country, so is Meghan.”