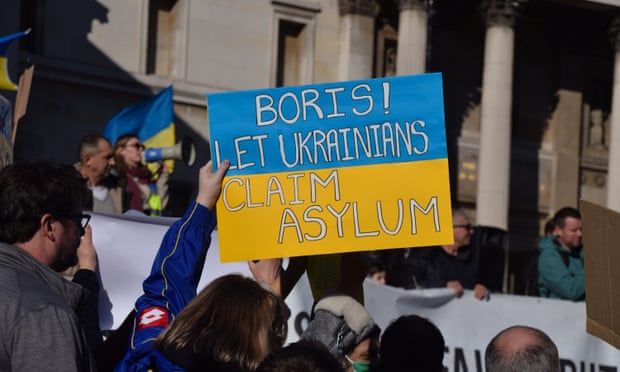 Home secretary cites “concerns” over extremists and Russian agents entering UK amid growing unrest among Tory MPs. Is that only stupidity (as they have already visa and already staying in UK) or just primitive evilness and racism a la Narendra Modi style? Sending children, woman’s and elder is to war one is by itself an act of terror by a British official that suppose to fight terror… shame on her!
Priti Patel has rejected demands to offer a full visa waiver to Ukrainians fleeing war amid growing unrest among Conservative MPs over the government’s refugee policy.

The home secretary said security and biometric checks must stay in place for applicants because of concerns about extremists and Russian agents entering the UK while posing as refugees, but the UK’s policy did not appear to have changed from the one announced on Sunday evening.

Patel’s statement on Monday was criticised by refugee charities and opposition MPs for falling short of the package of measures put forward by all 27 EU member countries.

It swiftly followed the Guardian’s disclosure of a letter from 37 Conservative MPs to Boris Johnson calling for the government to “act decisively” and “share responsibility” with other European countries.

On Monday night, however, the home secretary said expanding the visa scheme was something ministers were “absolutely working on”. Speaking in a pre-recorded interview on ITV’s Peston on Tuesday, Patel said policies were “evolving” and there will be “further changes and announcements … in the next few days as well”.

Under plans set out on Sunday evening, Ukrainian nationals settled in the UK will be able to bring their “immediate family members” to join them. However, these would be available only to spouses, unmarried partners of at least two years, parents or their children if one is under 18, or adult relatives who are also carers.

Appearing before the Commons, Patel said: “Security and biometric checks are a fundamental part of our visa approval process worldwide and will continue, as they did for the evacuation of people from Afghanistan.

“That is vital to keep British citizens safe and to ensure that we are helping those in genuine need, particularly as Russian troops are now infiltrating Ukraine and merging into Ukrainian forces.”

She told MPs that intelligence reports had identified “extremist groups and organisations” who could attempt to come to the UK, adding: “We know all too well what Putin’s Russia is willing to do, even on our soil, as we saw through the Salisbury attack.”

Patel was asked by Yvette Cooper, the shadow home secretary, if an elderly Ukrainian mother of a British resident who has been prevented by Border Force from travelling to the UK from Paris would now be able to come. Patel replied that the woman, a widow, would.

Patel had earlier said the first phase of the “bespoke humanitarian route” being created for Ukrainians to enter the UK would allow around 100,000 people to come to “seek sanctuary”.

The EU is preparing to grant Ukrainians who flee the war the right to stay and work in the 27-nation bloc for up to three years, senior officials said on Monday, adding that EU border states would get help to cope with the arrivals.

Responding to the UK announcement, Enver Solomon, the chief executive of the Refugee Council, said the proposal fell “well short of what is needed”.

“Compared to the EU’s decision … it is heartless and mean-spirited sending a message to desperate Ukrainians in search of safety that unless they have a family member in the UK, they are not welcome,” he said.

The prime minister earlier received a letter from members of the One Nation Conservatives group led by the former Home Office minister Damian Green criticising the UK’s response and also signed by the former ministers Jeremy Hunt, Caroline Nokes and Sir Robert Buckland.

“We need sincere and immediate support for the Ukrainian people. The United Kingdom cannot flag or fail, our message must be clear: Ukrainian victims of war seeking refuge are welcome,” the letter says.

The One Nation caucus, which is often seen as a centrist grouping in the party, has around 40 members.

Designed to deal with mass arrivals of displaced persons in the EU, the proposals are expected to provide for the same level of protection, for one to three years, in all EU states, including residence permits and access to employment and social welfare.
#Boris Johnson  #Afghanistan  #Priti Patel  #Johnson