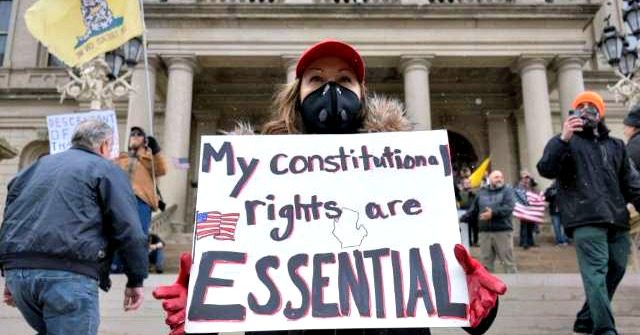 New Jersey citizens demonstrated in Trenton Friday against the “stay-at-home” order of Democrat Gov. Phil Murphy during the pandemic.

The New Jersey Chamber of Commerce recorded video of the protest that showed “a long line of cars honking their horns along West State Street, across from the Statehouse and Murphy’s office.”

The chamber apparently tweeted about the demonstration, but that tweet and the video recording of the protest have been deleted.

According to the report, the demonstration featured people waving American flags.

“The words ‘no more fear’ were audible through a megaphone as a helicopter hovered overhead and law enforcement officers blocked access to the Statehouse parking complex,” the Politico report stated.

n Wednesday, New Jersey Sen. Mike Doherty (R), told InsiderNJ he would like to see the state make more progress in lifting the shutdown put into place by Murphy.

“I can no longer support Gov. Murphy’s draconian shut down measures,” Doherty said. “He needs to stop his one size fits all approach. He is destroying small businesses and sending millions of NJ residents into poverty.”

Last week, Doherty urged Murphy to end restricting the use of hydroxychloroquine (HCQ) only for individuals who have tested positive for the COVID-19 infection.

“When patients are presenting all the virus symptoms, doctors should be able to prescribe the best weapons at their disposal,” the state senator said. “It is indefensible for the State to withhold medication and wait days or weeks for a positive test to come back.”

Doherty has been critical of the fact that churches in New Jersey are shut down while liquor stores are considered “essential” services and remain open.

“Churches are willing to conduct outdoor, open air services with proper spacing,” Doherty told InsiderNJ. “Murphy has rejected that while allowing the essential service of selling more booze to desperate citizens, and allowing customers to pull up to fast food take out windows where the spacing between the customer and the server is zero inches.”

Murphy said Thursday he would like to see things open up in the U.S. by June 1. He told ABC News’s Powerhouse Politics podcast:

On Friday, the governor asked the Department of Homeland Security to extend work permits for Deferred Action for Childhood Arrivals (DACA) beneficiaries to protect them from deportation.