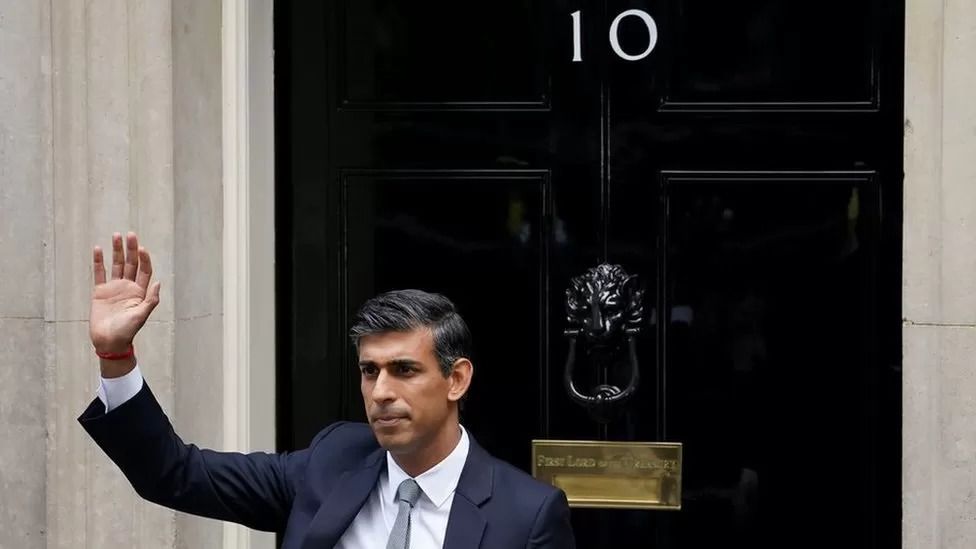 Rishi Sunak aims to bring factions together in cabinet reshuffle

The PM's reshuffle of his top team signals his priorities: unity and stability (for the party, not for the British people). But can it work?

Rishi Sunak has appointed his team of top ministers, on his first day as the UK's prime minister.

In a key speech outside No 10, he said he wanted to bring the country and party together, promising economic stability and confidence.

The cabinet reshuffle saw some predictable choices, and some that have surprised MPs.

"Unity, experience and continuity in some really key roles," are the themes No 10 say they wanted to convey.

So, what can we read into who is staying, who is going, and what it all means?

No 10's message is echoed by the former director of communications for David Cameron, Sir Craig Oliver, who said: "Unity is the watchword of this reshuffle. It's clear each part of the party will feel represented in some way.

"Mr Sunak's also not exiled big beasts to the backbenches where they can cause trouble - like Truss did with Michael Gove."

Another of the notable elements of this reshuffle is the stability in three of the top jobs: Jeremy Hunt as chancellor, James Cleverly as foreign secretary and Ben Wallace as defence secretary.

This is likely intended to be a clear message that, particularly during the war in Ukraine and economic turmoil of the last few months, Mr Sunak wants to reassure MPs he can offer stability.

He and Mr Sunak have talked about the need for "difficult decisions", something we are likely to hear more about on 31 October when they set out the government's next budget.

As well as a signal of stability, keeping Boris Johnson ally Mr Wallace as defence secretary - and Mr Cleverly as foreign secretary - is an olive branch to some of the senior MPs who did not back Mr Sunak.

"This cabinet brings the talents of the party together", said a No 10 source, speaking about the conclusion of the reshuffle.

"It reflects a unified party and a cabinet with significant experience, ensuring that at this uncertain time there is continuity at the heart of the government."

They said the hard work would begin now and the new cabinet would "deliver for the British people". 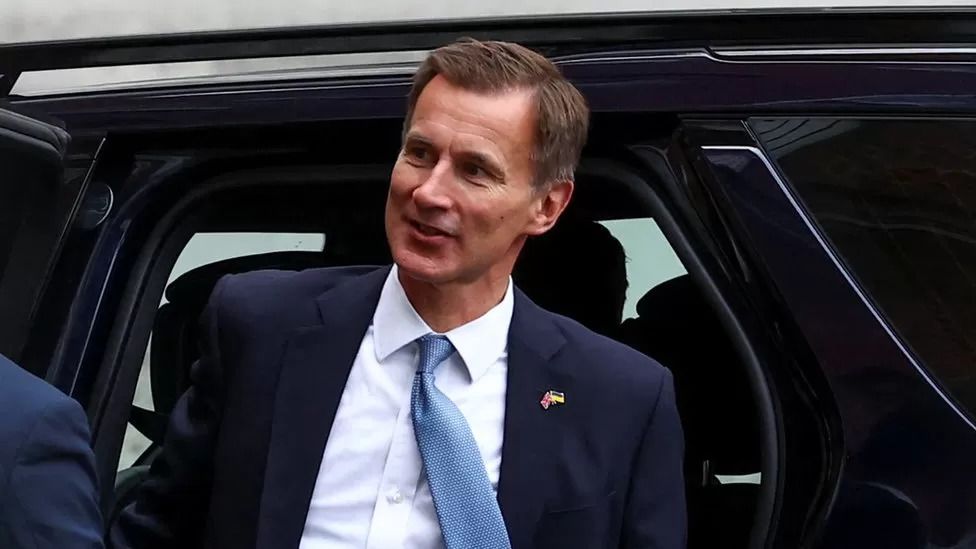 Mr Hunt took over from Kwasi Kwarteng, reversing many of the former chancellor's proposals

A senior government source told the BBC Mr Cleverly's appointment would allow "stability at the Foreign Office" and means "continuity for the UK's relationships around the world".

Indeed, Mr Cleverly's social media feeds, as the reshuffle progressed, were full of pictures of him calling foreign government representatives.

This decision, though, shows Penny Mordaunt paid the price for not dropping out of the leadership race sooner.

It was widely reported she had been vying for the foreign secretary role. She remains as Leader of the House of Commons, the job that ensures government legislation gets through Parliament.

One potential clash coming down the line, however, is over defence spending.

Mr Wallace has made it clear in the past he wants defence spending to rise to 3% of national income by 2030. That's not something the new chancellor has committed to as part of his plans to make efficiencies (read: cuts), in government.

One of the most eye-catching appointments was the return of Suella Braverman as home secretary.

She resigned just days ago from the role after a security breach, when she sent a government document to someone not authorised to receive it.

She endorsed Mr Sunak to be the new leader two days ago, a move seen as a massive boost for his campaign as it represented support from the right-wing of the party.

Some sources in government speculate that endorsement may well have been an ask for something in return. There was a hint of that in her article for the Daily Telegraph backing Mr Sunak - where she said we will "only stop boats crossing the Channel" if the UK passes new laws to limit the impact of Modern Slavery laws, the Human Rights Act and the European Convention on Human Rights.

Such a move would be controversial, and face legal and political challenges - especially in the House of Lords. But is her appointment a signal Mr Sunak has agreed it is the way forward? It looks likely.

Former No 10 pollster James Johnson tweeted that the tougher approach on immigration provides an opening for the Tories among swing voters in so-called Red Wall seats. 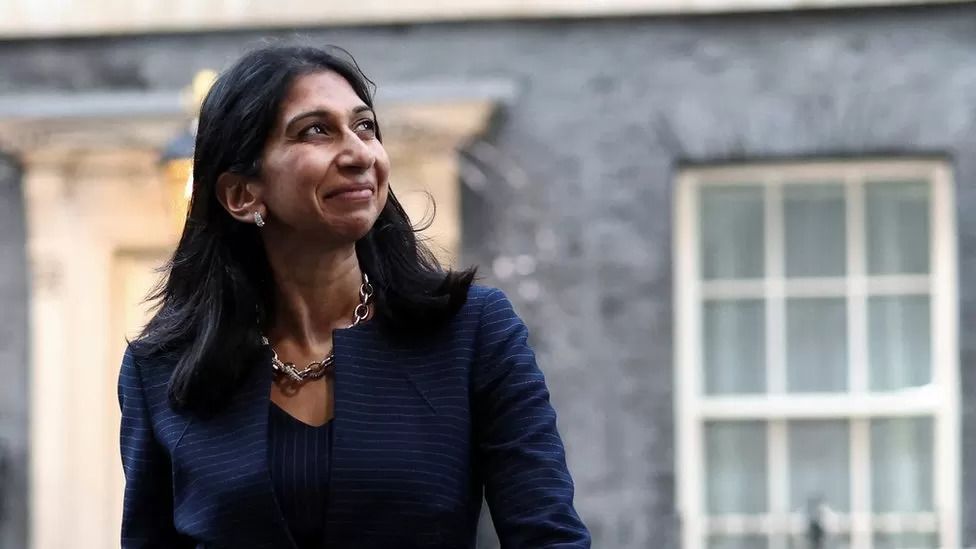 "Suella Braverman's reappointment is the most eye-catching," says Sir Craig.

"There's a lot he is going to be doing that the right of the party will be uncomfortable with - for example around the budget and economy.

"So this [signal of a harder line on immigration] means he can point to something that really goes down well with the more traditional wings of MPs and party members."

But her appointment may make it harder to make the argument, as Mr Sunak did earlier, that this would be a government of "integrity" - given her recent breach.

Mr Sunak has also brought back some key supporters to senior roles - like Dominic Raab, Steve Barclay and Oliver Dowden. They were key figures in his campaign throughout the summer, rewarded for their loyalty with roles back in government.

Mr Dowden's return was welcomed by former cabinet minister Sir David Lidington, who said: "No-one in the current government has a sharper understanding of the machinery of government, and how to turn slogans and paper projects into practical outcomes."

Simon Hart has also been brought in as chief whip, responsible for party discipline and MPs' welfare. This role will be key, after months of internal infighting, to anticipate any potential rebellions or conflicts and keep Tory MPs toeing the party line.

He's got cabinet experience as the former Welsh secretary, but also experience trying to bring different factions of the party together - something he did during the Brexit years - and is close friends with former chief whip Gavin Williamson and leader of the influential 1922 backbench committee of MPs Sir Graham Brady.

Nadhim Zahawi, briefly chancellor over the summer, has received a slight demotion from Cabinet Office minister, to chair of the party - perhaps in response to his flip-flopping support over the last few months.

He'll still have a tough job ahead of local elections next year - and will partly be responsible for showing the party can turn its electoral fortunes around after a series of record-low opinion polls.

Some Truss loyalists out

While Mr Sunak has reached out to some senior figures who backed his rivals Boris Johnson and Liz Truss, others have been shown the door.

Boris Johnson ally Jake Berry, the former party chairman, is out, as is the former Levelling Up Secretary Simon Clarke - a significant backer of Liz Truss and her plans.

Jacob Rees-Mogg, as widely expected, is no longer business secretary. Only days ago, he'd said the party was 'Boris or Bust' - and he has openly criticised Mr Sunak. Sunak allies will not miss him.

These two have been replaced by loyalist Grant Shapps as business secretary and the return of Michael Gove as levelling up secretary, which he held under Boris Johnson.

These two were key in orchestrating MPs to rebel against Ms Truss's plans to cut the top rate of tax for the highest earners, a thorn in her side at the Tory party conference causing her to U-turn.

Where does this leave us?

The resulting Cabinet is somewhat of a Tory party coalition - with senior figures from the left, right and centre of the party.

The (mammoth) aim is to unite the party, after years of clashes over personalities and policies, from Brexit and Boris Johnson, to tax cuts, immigration and fracking.

The test will be when the new prime minister tries new policies, and makes the ever-euphemised "difficult decisions" on the economy that could involve some spending cuts or tax rises.

It remains to be seen if having a broad church of figures at the top will be enough to stave off dissent on the backbenches.