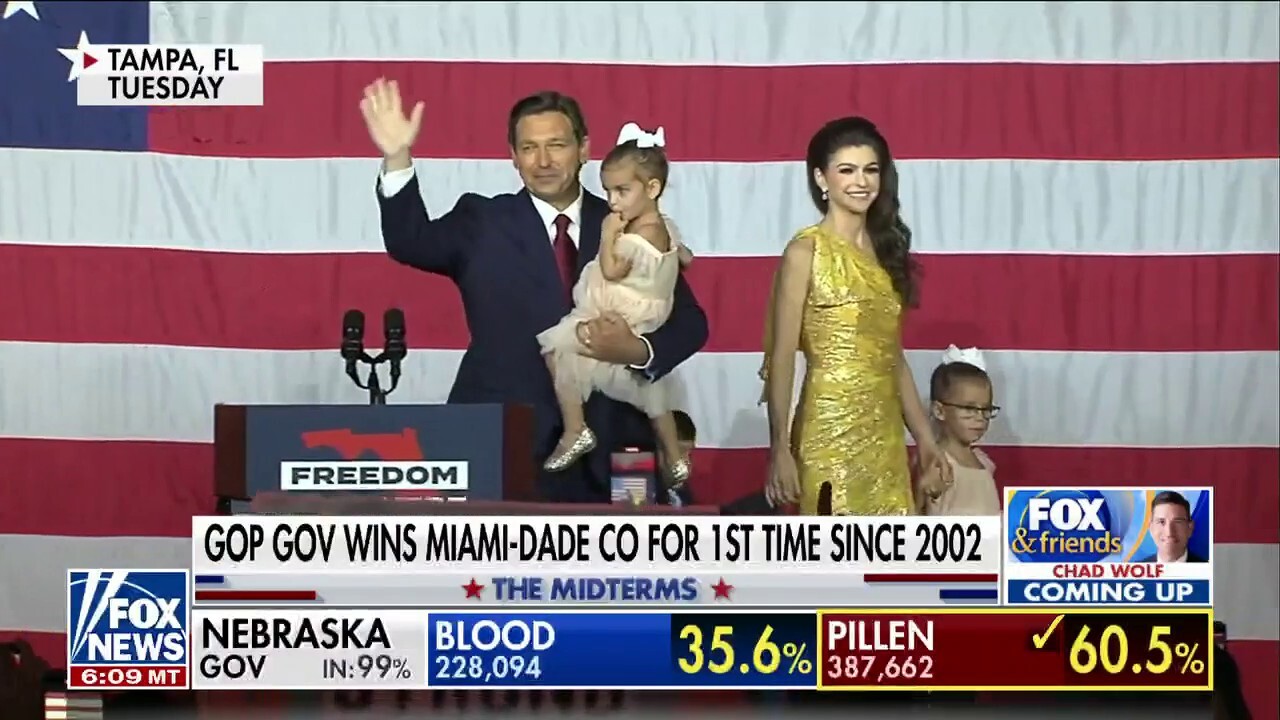 The biggest loser? Donald Trump, whose handpicked loyalist candidates in a number of races struggled to beat vulnerable Democrats. Once again, the former president may have cost Republicans control of the Senate, in a year when it was theirs to lose.

Many will conclude, on the basis of the midterm 2022 results, that the Republican Party is ready to move on, without Donald Trump as its leader.

DeSantis scored a win in Florida that was one for the record books. In Miami-Dade County, a region which President Joe Biden won by 16 percentage points in 2020, the popular governor won easily. Not only was the margin of victory astounding in itself, it also reinforced an emerging reality: Hispanic voters may be shifting their long-term alliance to Republicans.

DeSantis won because he embraced Trumpian policies, stood firm against the woke mob, led his state through the pandemic with brilliance and, more recently, managed the horrific damage done by Hurricane Ian with great competence. Florida residents rewarded the popular governor by re-electing him with roughly a 19-point margin over his opponent, Democrat Charlie Crist.

On the heels of his win, DeSantis delivered a barnburner victory speech, laying down markers for what will surely be a run for president in 2024 and declaring, "I have only begun to fight."

For Donald Trump, the election proved to be, using Barack Obama’s word, a shellacking. In Pennsylvania, Dr. Mehmet Oz, handpicked by Trump to represent the GOP in defending a seat being vacated by retiring Sen. Pat Toomey, lost to Lt. Gov. John Fetterman. Fetterman suffered a stroke early in the contest, but even as his ability to campaign was severely curtailed, he beat out the celebrity doctor.

That was not the only bitter disappointment for Republicans. In New Hampshire, incumbent Sen. Maggie Hassan, thought to be the most vulnerable Democrat running for re-election, survived to keep her seat. Her rival, retired Gen. Dan Bolduc, was another Trump-endorsed candidate who had little political experience. Bolduc was considered a long shot and not heavily supported by the GOP establishment, but polling showed him closing in during the final weeks of the race.

In Arizona, similarly, Senate candidate Blake Masters, another Trump pick, failed to beat out Democrat incumbent Mark Kelly. Masters was also a political neophyte who had come from behind in recent weeks. He was buoyed by yet another Trump acolyte, gubernatorial candidate Kari Lake, whose race against Democrat Katie Hobbs is too close to call.

It is true that in Ohio, Trump-aligned JD Vance won against Democrat Tim Ryan, and in Georgia, Herschel Walker, backed by Trump, looks to have forced incumbent Raphael Warnock, to a runoff. But both those Senate candidates were helped by popular governors who pulled them along as they easily rolled to victory. Bottom line: there was no red wave.

From the earliest days of the midterm elections, Trump critics accused the former president of manipulating the contests with a goal of burnishing his own brand instead of prioritizing winning seats for the Republican Party. He endorsed candidates who were personally loyal to him and who backed his claim that Joe Biden’s election was illegitimate.

Democrats were bitterly critical of those "election deniers;" Joe Biden traveled the country warning that electing such candidates constituted a "threat to Democracy." Even though polls showed that message – and his campaigning – failing to overwhelm kitchen table issues like inflation and crime – voters turned away from GOP contenders they deemed extreme.

Not only did Trump choose less capable candidates, he also withheld much-needed cash to fund their campaigns. The former president began the contest sitting on a campaign chest containing more than $125 million; it is unclear how much he actually spent.

The midterms were not a total bust for Republicans. They appear to have won control of the House, which will allow them to put the brakes on Joe Biden’s damaging socialist agenda. But to not have taken full advantage of Biden’s basement-level approval ratings, soaring inflation, rampant crime and the horrific breakdown of our southern border is beyond disappointing.

Many, including myself, thought that it would be defeated Democrats engaging in a vast reset in coming weeks as they tried to figure out how to reboot their brand. Instead, it appears that Republicans will be the party assessing where they went wrong and pointing fingers at those responsible for a disappointing outcome.
Trump will be blamed for the GOP coming up short.

Further poisoning his brand, Trump in recent days has attacked Ron DeSantis, whom he rightly views as his biggest challenger in a potential run for the Oval Office in 2024. He belittled him by calling him "DeSanctimonious," awarding the Florida governor one of his trademark nicknames that – like Sleepy Joe – have sometimes stuck. Trump also childishly threatened that should DeSantis decide to throw his hat in the 2024 ring, The Donald would reveal unflattering information about the governor.

Trump may be ready to play dirty to win the GOP nomination in 2024. If he does, he will not only cement the disdain with which many in his party view him today, he will once again scorch Republican chances of defeating Democrats.

Let us hope that the millions of Americans who have supported Trump in 2016 and again in 2020 begin to see that his time has passed. If they like his policies, they need to move their allegiance to Ron DeSantis, who has never lost a campaign, and who emerged the big winner in these midterms.
#Donald Trump  #Joe Biden