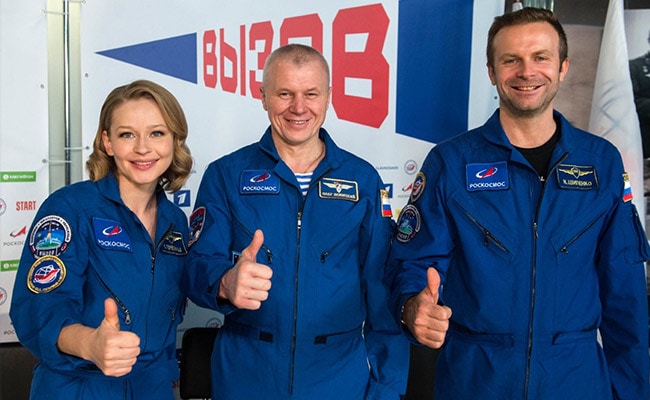 The 38-year-old US-educated film director Klim Shipenko said cinema was ready to conquer space.
Their movie props floated around and they used Velcro to keep objects in place but Russia's first film crew in space said they were delighted with the result and had "shot everything we planned".

Russian actress Yulia Peresild and film director Klim Shipenko returned to Earth on Sunday after spending 12 days on the International Space Station (ISS) shooting the first movie in orbit in an effort to beat the United States.

A beaming Shipenko told reporters that the task was a "huge challenge" and they had to constantly adapt.

They shot more than 30 hours worth of footage which will later be edited down to around 30 minutes.

"We've shot everything we planned," Shipenko said from the Yuri Gagarin Cosmonaut Training Center outside Moscow where he and Peresild, 37, are adapting to life back on Earth and learning to walk again.

"Cinema is looking for new forms. The cosmos is also ready to welcome various experimentalists," said Shipenko, who like the actress sported the blue uniform of Russian cosmonauts.

He said his stint on the ISS was full of professional discoveries and added that he would never have been able to shoot on Earth what he had shot in space.

The plot, which has been mostly kept under wraps along with its budget, centres around a surgeon who is dispatched to the ISS to save a cosmonaut.

If the project stays on track, the Russian crew will beat a Hollywood project announced last year by "Mission Impossible" star Tom Cruise together with NASA and Elon Musk's SpaceX.

Peresild said she had to use Velcro tape to keep her belongings including lipstick and mascara in place, while various movie props like medical devices floated in space.

"They are so small and fly away so fast," she said.

The film crew praised Russian cosmonauts on the ISS who they said were very helpful and will have cameo roles in the film.

"The guys found they had acting talent," he said. "I've made them find it," he said, laughing.

Peresild said that the cosmonauts had to perform a "huge amount of tasks" during the day but "they continued to work with us at night."
#Elon Musk