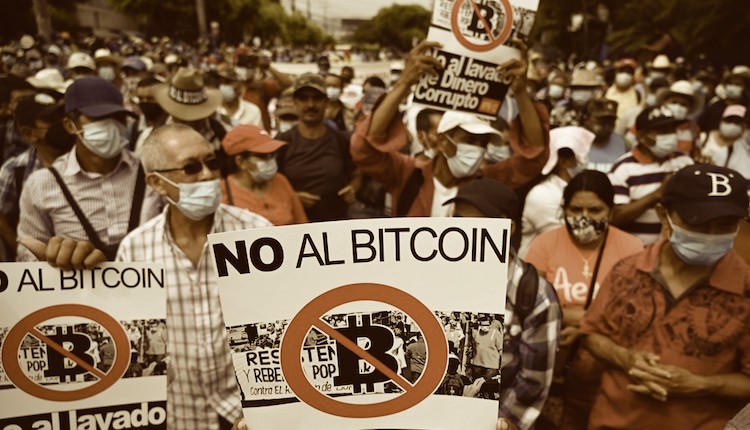 While the president of El Salvador, Nayib Bukele prepares for the day that the Bitcoin Law becomes effective, the number protests against it are increasing.

The political situation in El Salvador is becoming more tense as the country approaches the official adoption date, 7 September, for Bitcoin as legal tender.

According to the new Law, all economic agents must accept Bitcoin along with the dollar as means of payment.

According to president Bukele the measure aims to benefit the people and save the country close to $400 million in remittance commissions, guaranteeing instant and more secure financial transactions.

But the Salvadoran people don’t seem to share the president’s view.

The past few days have witnessed annoyance and fear of the imminent application of the Law have becoming the mood of Salvadorans. Demonstrations have begun in the streets against Bitcoin.

As reported by Euronews, hundreds of protesters have filled the streets to raise their voices against the Law. Among the organizing groups were workers, veterans, and pensioners.

Uncertainty seems to be the crucial point of concern. Stanley Quinteros, a member of the Supreme Court of Justice’s workers’ union, told Reuters that the mandatory adoption of bitcoin could damage Salvadoran finances as there is no way to control or stabilize prices.

“We know this coin fluctuates drastically. Its value changes from one second to another and we will have no control over it.”

According to the protestors almost nobody in the country wants Bitcoin, and interestingly they are against the fact that its use could facilitate corruption in a country known for its authoritarian and non-transparent policies.

Earlier, the Salvadoran Association of International Cargo Carriers (ASTIC) also organized massive protests, demanding the modification of Article 7 of the Bitcoin Law that stipulates the mandatory acceptance of Bitcoin.

“No Central American carrier contracted by an economic entity in El Salvador will accept bitcoin as a form of payment, creating divisionism in the sector for paying the foreigner in dollars and the national for being obliged with the cryptocurrency.”

The association issued a threat, saying that if they do not receive a response to their requests, they will begin to charge an additional 20% fee to those who pay freight with Bitcoin to protect themselves from the volatility of the cryptocurrency.

Another group of activists, students and unions last month gathered in front of the Congress, asking for the government to drop the Bitcoin Law. Their argument was that the law was introduced and approved without any consultation and could potentially harm the interest of the people.

The group argued in a written statement that Bitcoin’s decentralization could do more harm than good:

“In conclusion, bitcoin would facilitate public corruption and the operations of drug, arms and human traffickers, extortionists and tax evaders. It would also cause monetary chaos, hit people’s salaries, pensions and savings, ruin many MSMEs, affect peasant families and hit the middle strata.”

Nayib Bukele, who seems absolutely certain that his decision is the best for his people, is not swayed by the protesting voices and tweeted that his adversaries will suffer a double loss once Bitcoin starts to be used as legal tender.

“The awkward opposition always plays one-step chess. They have bet everything to scare the population about Bitcoin law and they may achieve something, but only until September 7. Once in effect, people will see the benefits, they will be left as liars and they will lose double”