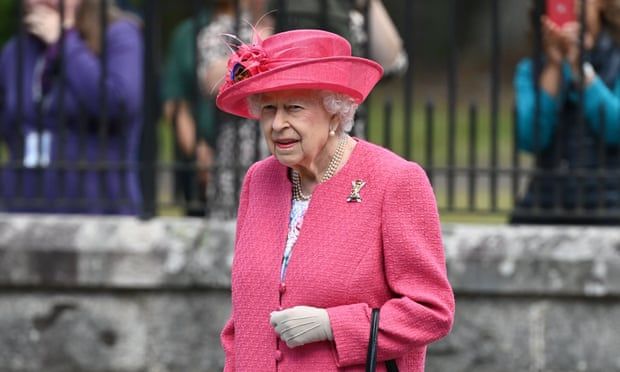 Secret documents reveal scale of funeral strategy and government anxieties over resources
The UK government’s vast security operation to manage the immediate aftermath of the death of the Queen include official social media blackouts and a ban on retweets.

These plans, codenamed Operation London Bridge, which were first revealed in a Guardian Long Read in 2017 and have now been seen in full by Politico, detail the scale of the arrangements for the funeral and government anxieties about whether the UK has the resources to execute them.

The social media strategy plays a prominent role, including plans to change the royal family’s website to a black holding page with a short statement confirming the Queen’s death, while the gov.uk website and all governmental social media pages will display a black banner. Non-urgent content will not be published and retweets will be banned unless cleared by the government’s head of communications.

The documents show plans for the Queen’s coffin to be taken on a procession from Buckingham Palace to the Palace of Westminster, where it will lie on a raised box known as a catafalque, which will be open to the public for 23 hours a day for three days. Tickets with a time slot will be issued for VIPs.

The state funeral will be held 10 days after her death and heralded as a “day of national mourning”, but it will not be an official bank holiday. If it falls on a weekday it will be left to the discretion of employers to give their staff the day off, and there will be no substitute day off if it falls on a weekend.

The documents add detail to previous reporting, which revealed that the prime minister will be informed by a civil servant that “London Bridge is down”, while the death will be announced via a newsflash on the PA Media wire.

The emergence of the documents is not thought to reflect any deterioration in the health of the Queen, who is 95 years old.

The plans for Operation London Bridge and Operation Spring Tide, which sets out how Charles will accede to the throne, contain granular detail such as the potential for public anger if Downing Street cannot lower its flags to half-mast within 10 minutes of the announcement since there is no “flag officer”.

The documents also showed concerns from the Foreign Office over how to arrange entry for significant numbers of tourists, from the Home Office on how to handle potential terror alerts, and from the Department for Transport on overcrowding in the capital.

Internally, the day will be referred to as “D-day”, with each subsequent day leading up to the funeral referred to as “D+1,” “D+2” and so on. The UK parliament and the devolved legislatures in Scotland, Wales and Northern Ireland will adjourn and parliament will be recalled if it is not sitting.

The Ministry of Defence will arrange for gun salutes to take place at all saluting stations and a national two-minutes’ silence will be announced.