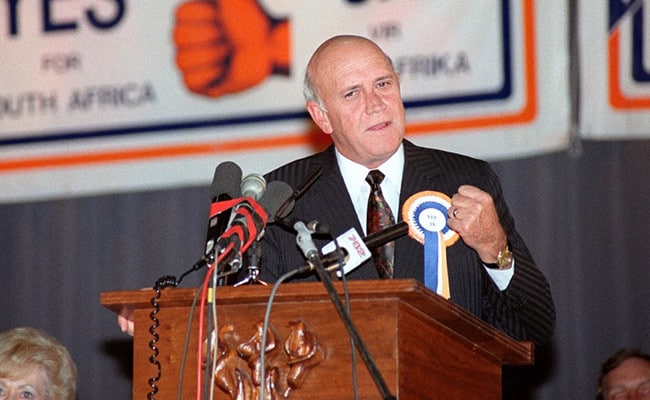 He died after a battle with cancer, his foundation said in a statement.

De Klerk had announced his diagnosis on his 85th birthday, on March 18 this year.

"It is with the deepest sadness that the FW de Klerk Foundation must announce that former president FW de Klerk died peacefully at his home in Fresnaye earlier this morning following his struggle against mesothelioma cancer," it said.

He is survived by his wife Elita, children Jan and Susan, and grandchildren.

"The family will, in due course, make an announcement regarding funeral arrangements," it added.

He is most remembered for his famous speech delivered on February 2, 1990, announcing the lifting of a ban on the African National Congress (ANC) and other liberation movements.

In the same speech he ordered the release from prison of anti-apartheid icon Mandela after 27 years in jail.

Born in the economic hub of Johannesburg, into a family of Afrikaners, a white ethnic group descended mainly from Dutch colonisers, his father was a leading apartheid senator who served briefly as interim president.

He studied law, before being elected to parliament as a member of the National Party that instituted apartheid.

De Klerk then held several ministerial positions before he became present in 1989, a position he held until he handed over the reigns to Mandela after the first democratic elections in 1994.