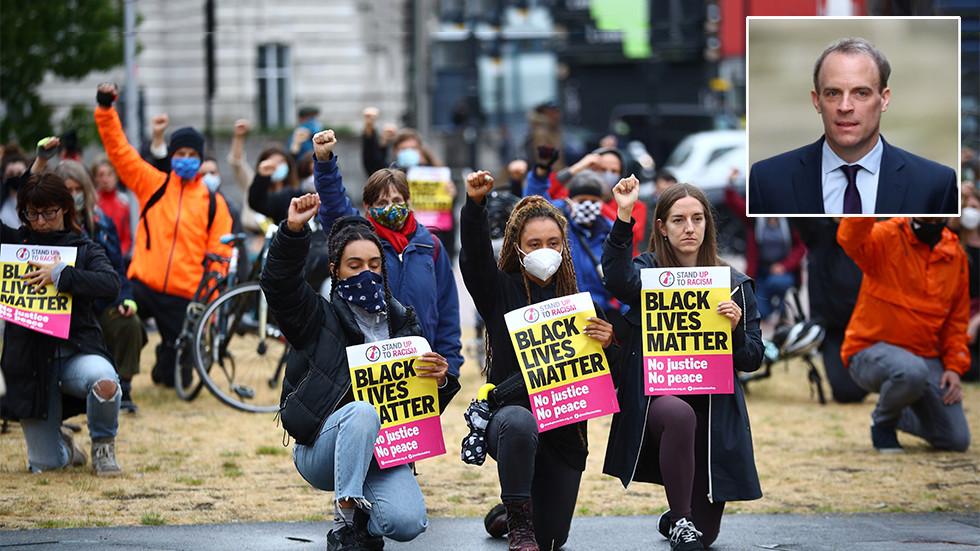 ‘Take the knee’ in support of BLM? Only for Queen & wife, says UK Foreign Sec, who thinks gesture comes from Game of Thrones

British Foreign Secretary Dominic Raab has poured cold water on the idea he would ever “take the knee” in support of the Black Lives Matter movement, saying the only people he would do that for are the Queen and his wife.

During an interview on Thursday with talkRadio’s Julia Hartley-Brewer, Raab was asked if he would “take the knee” - a gesture that has been taken up by anti-racism supporters across the world in a show of solidarity with the Black lives Matter movement. Raab suggested that he would refuse if requested.

Asked if he would take a knee in support of Black Lives Matter, Foreign Secretary Dominic Raab: "I take the knee for two people; the Queen and the Mrs when I asked her to marry me." Listen live ► https://t.co/sv3MZUm41c@JuliaHB1 | @DominicRaab pic.twitter.com/HbCIrCFKKV

A whole host of people, from police forces to politicians and, more recently, English Premier League footballers, have ‘taken the knee’ in the last few weeks, against a backdrop of protests and riots, sparked by the death of 46 year-old black American George Floyd in May.

Somewhat bizarrely, the foreign minister suggested that the origins of the now-iconic act may have come from the Game of Thrones TV series.

Raab said he understood other people might feel differently to him about the gesture, but that he was of the view the action symbolized “subjugation and subordination, rather than liberation or emancipation.”