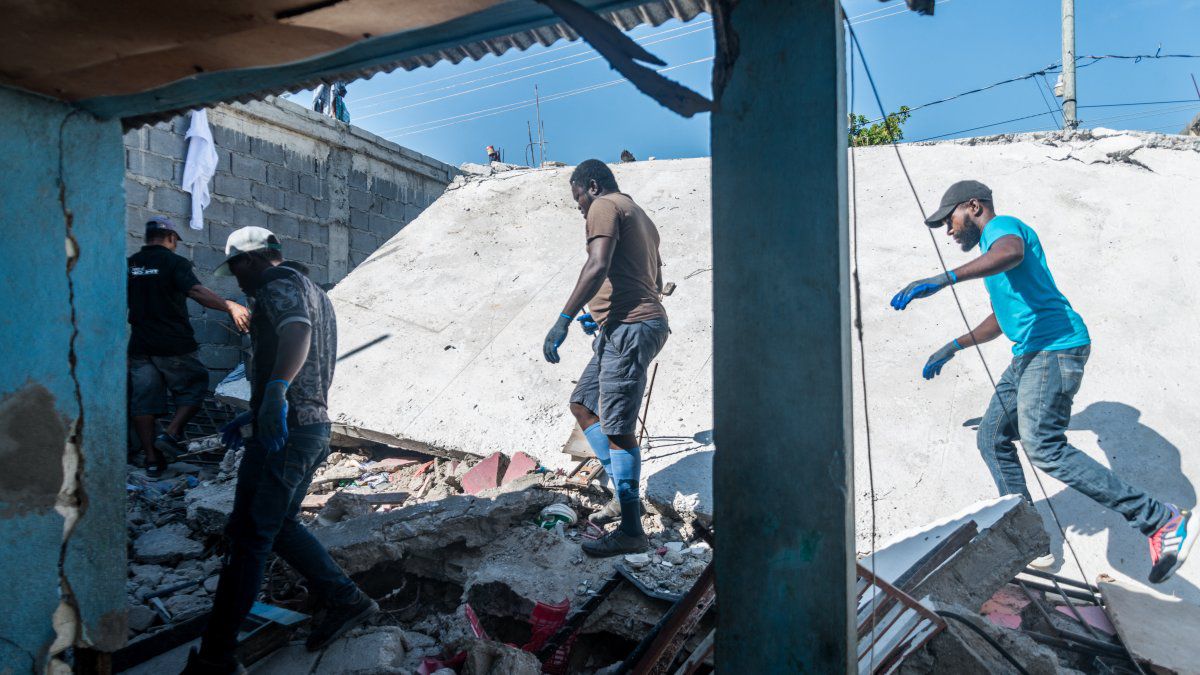 The death toll from the Haiti earthquake rose to almost 1,300

The death toll in the powerful earthquake in Haiti soared to nearly 1,300 on Sunday as crews dug desperately in collapsed buildings for survivors.

After a harrowing night of aftershocks, heavy machines, trucks and backhoes moved cement slabs from collapsed buildings in the town of Los Cayos, near the epicenter of the earthquake.

"It is by the grace of God and also thanks to my phone that I am alive, because I was able to tell people from outside where I was," the 30-year-old told AFP.

His younger brother, Job, and the neighbors spent more than three hours pulling him out of the rubble with no tools other than their arms.

"I was on the bus to work when the earthquake happened. I was able to reach Marcel by phone, but he said 'come save me, I'm under the cement,'" says Job François.

After being rescued from among the concrete blocks and broken furniture, with head injuries, Marcel François was immediately taken to the hospital in shock, as he had no news of his 10-month-old daughter, who was still trapped in the ruins. .

"I thought my daughter was dead. When I got to the hospital I was crying, I was resigned," says this 30-year-old man, moved.

Thanks to the teamwork of the residents and her uncle, little Ruth Marlee Alliyah François was taken from the house four hours after the earthquake.

Marcel and Job François hope that the professional teams will help them on Sunday morning to remove from the rubble the lifeless body of their tenant, a 27-year-old woman who lived on the ground floor of the residence and who died a few minutes later. minutes of the earthquake.


Efforts to help victims could be hampered as Tropical Storm Grace approaches, with the potential for torrential rains and flooding, according to the US National Weather Service.

The Ministry of Health sent personnel and medicines to the southwestern peninsula, but emergency logistics are also compromised by the insecurity that has plagued Haiti for months.

The only road that connects the capital with the southern half crosses the poor neighborhood of Martissant in just over two kilometers, which has been under the control of armed gangs since the beginning of June, preventing free movement.

The few hospitals in the affected areas have difficulty providing emergency care.

Pope Francis on Sunday expressed his "solidarity" with the people of Haiti, saying he hoped the international community would get involved on their behalf.

Many countries, such as the United States, the Dominican Republic, Mexico and Ecuador, have already offered their help by sending personnel, emergency rations and medical equipment.

Prime Minister Ariel Henry, who declared a state of emergency for a month on Saturday in the four departments affected by the disaster, thanked the international community on Sunday.

"We want to give a more adequate response than in 2010 after the earthquake. All aid that comes from abroad must be coordinated by the Civil Protection Directorate," demanded the head of the government, while calling his fellow citizens to "national unity. ".

"Let's forget our quarrels," he pleaded.

The trauma of the 2010 earthquake


The poorest country in America still remembers the magnitude 7 earthquake of January 12, 2010, which left much of Port-au-Prince and nearby cities in dusty ruins.

The country's efforts to recover from the disaster were held back by severe political instability.