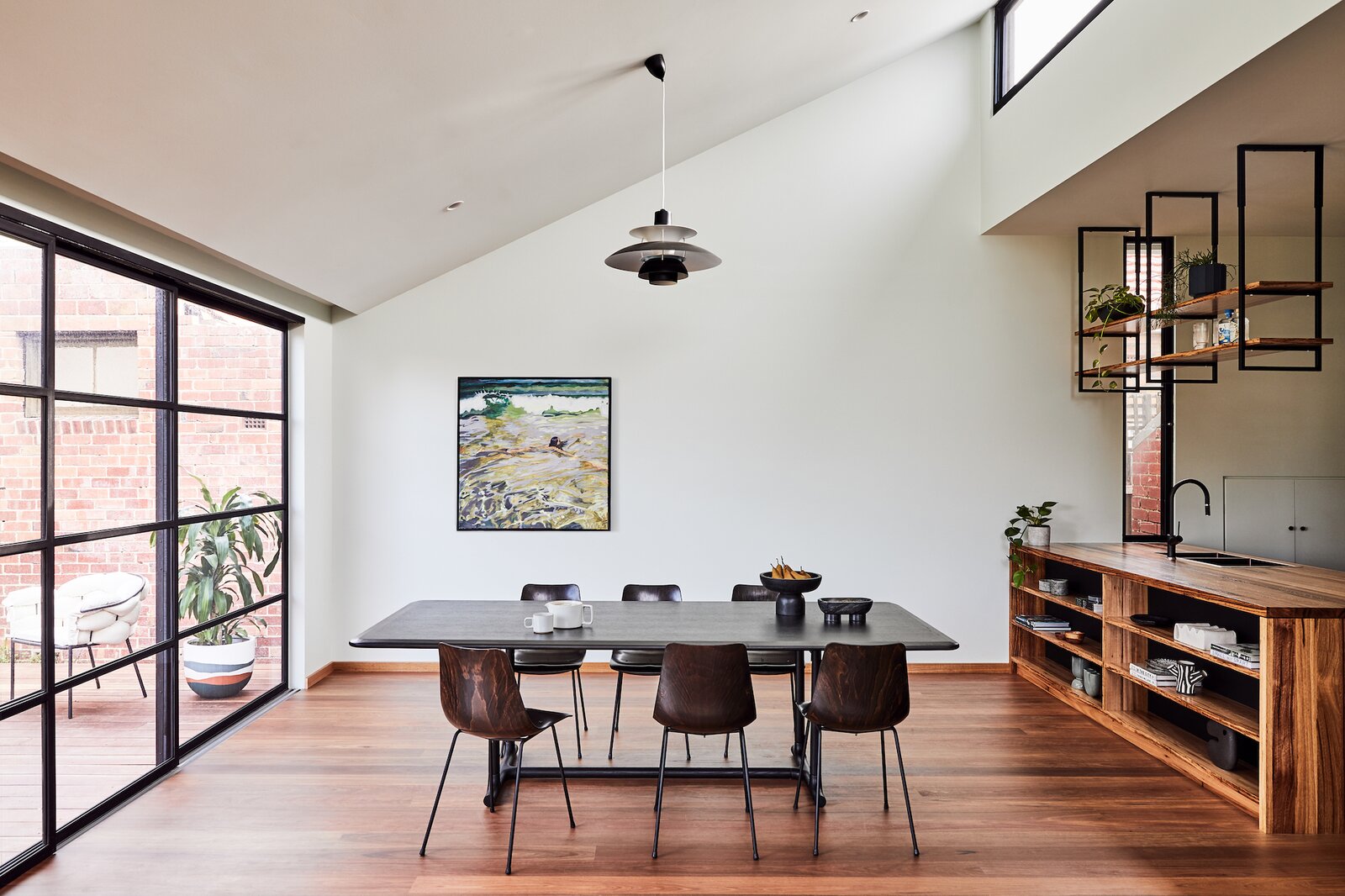 A weatherboard cottage gets an open and airy rear addition that features opulent green tile and contrasting spotted gum timber.

Bigger isn’t always better-and this was certainly the case in the renovation of a tired weatherboard home in Melbourne for a client who lives alone. The brief to Circle Studio Architects, a local firm, was to create a retreat that made efficient use of space and could be used for entertaining without sprawling unnecessarily into the rear garden. 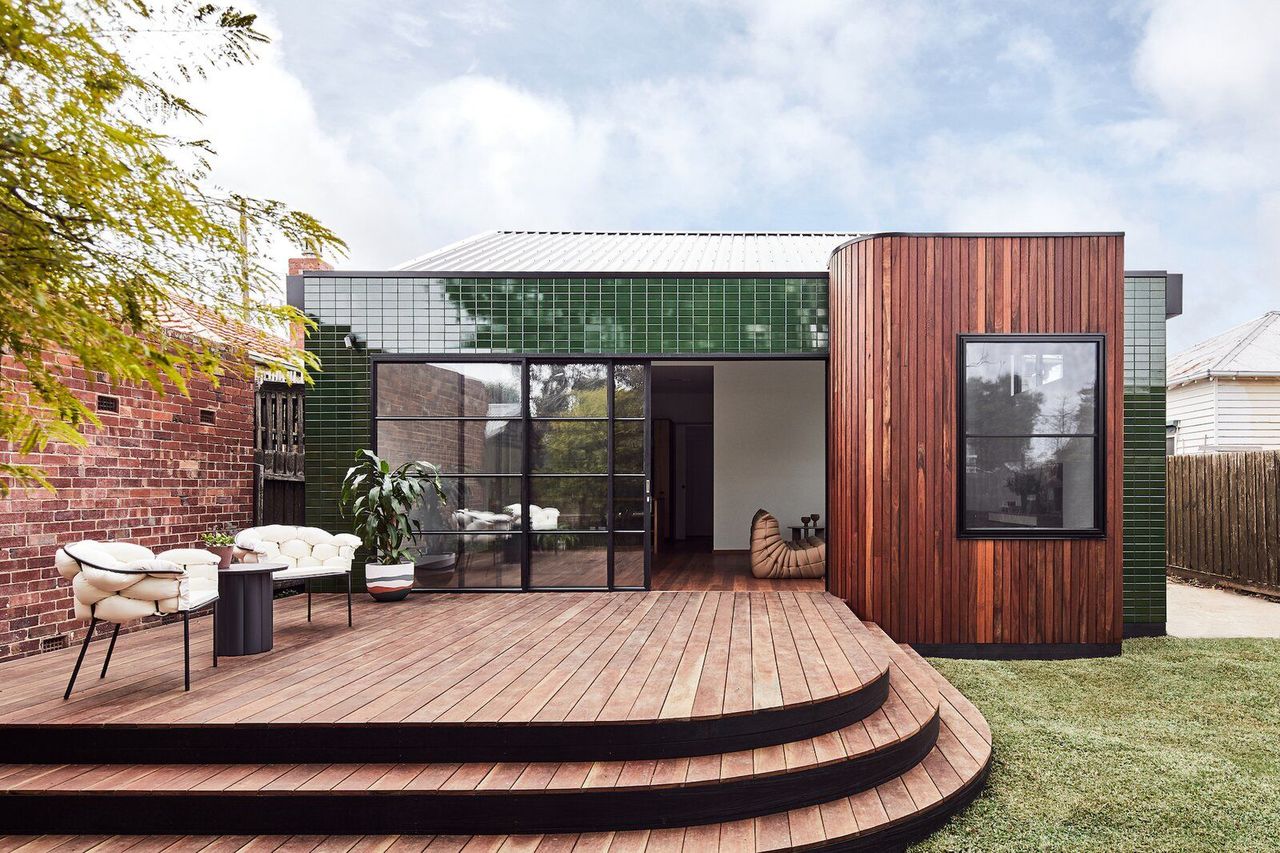 "[It] needed to feel like a warm private sanctuary, but also be able to entertain guests," says architect Yvonne Meng, director of Circle Studio. "One of the key points in the brief was to maximize light, and this became the driving factor for how we dealt with the form of the extension." 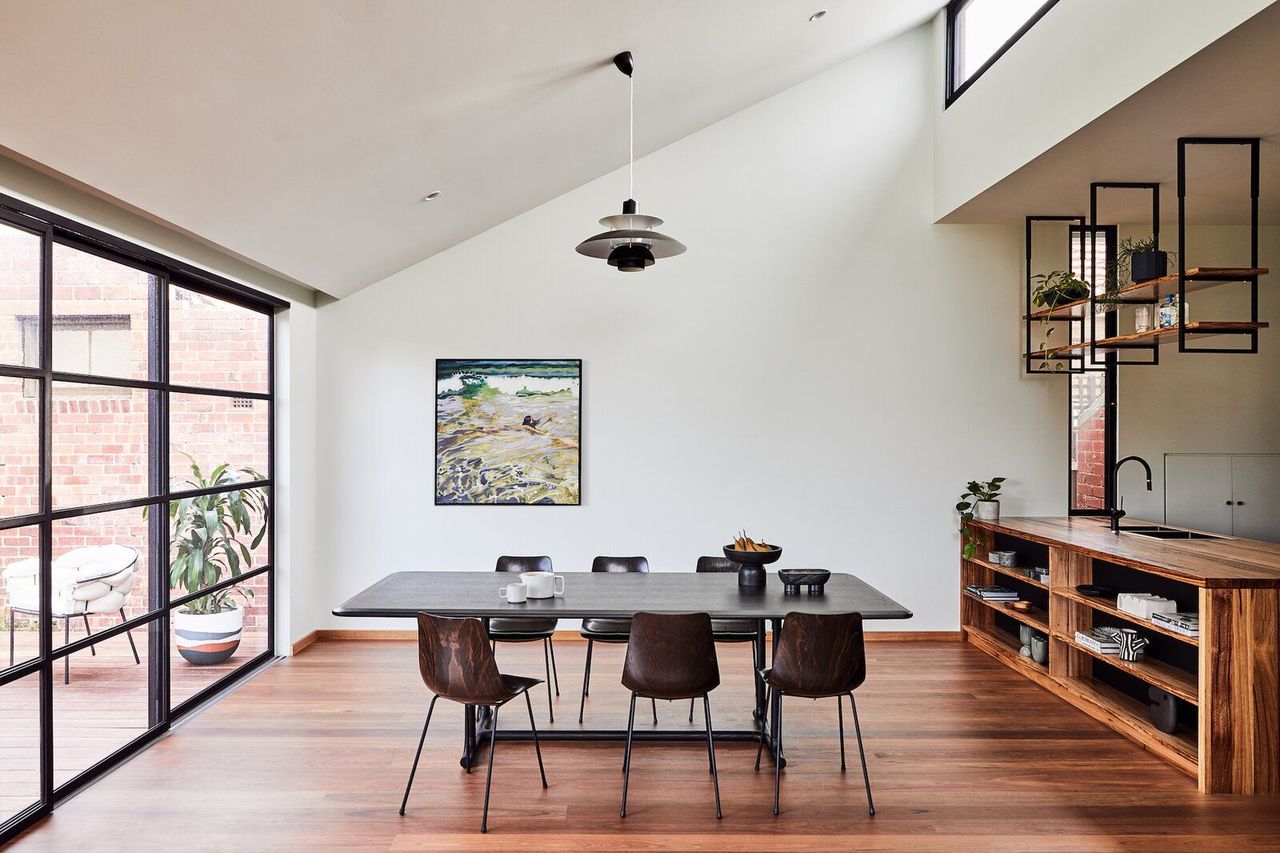 The existing residence was typical of Melbourne’s northern suburbs, with four rooms at the front and a lean-to added to the back to include a kitchen and laundry. The roof was heavily rusted, and some of the exterior cladding and windows needed replacing. The kitchen also hadn’t been updated since the ’80s. 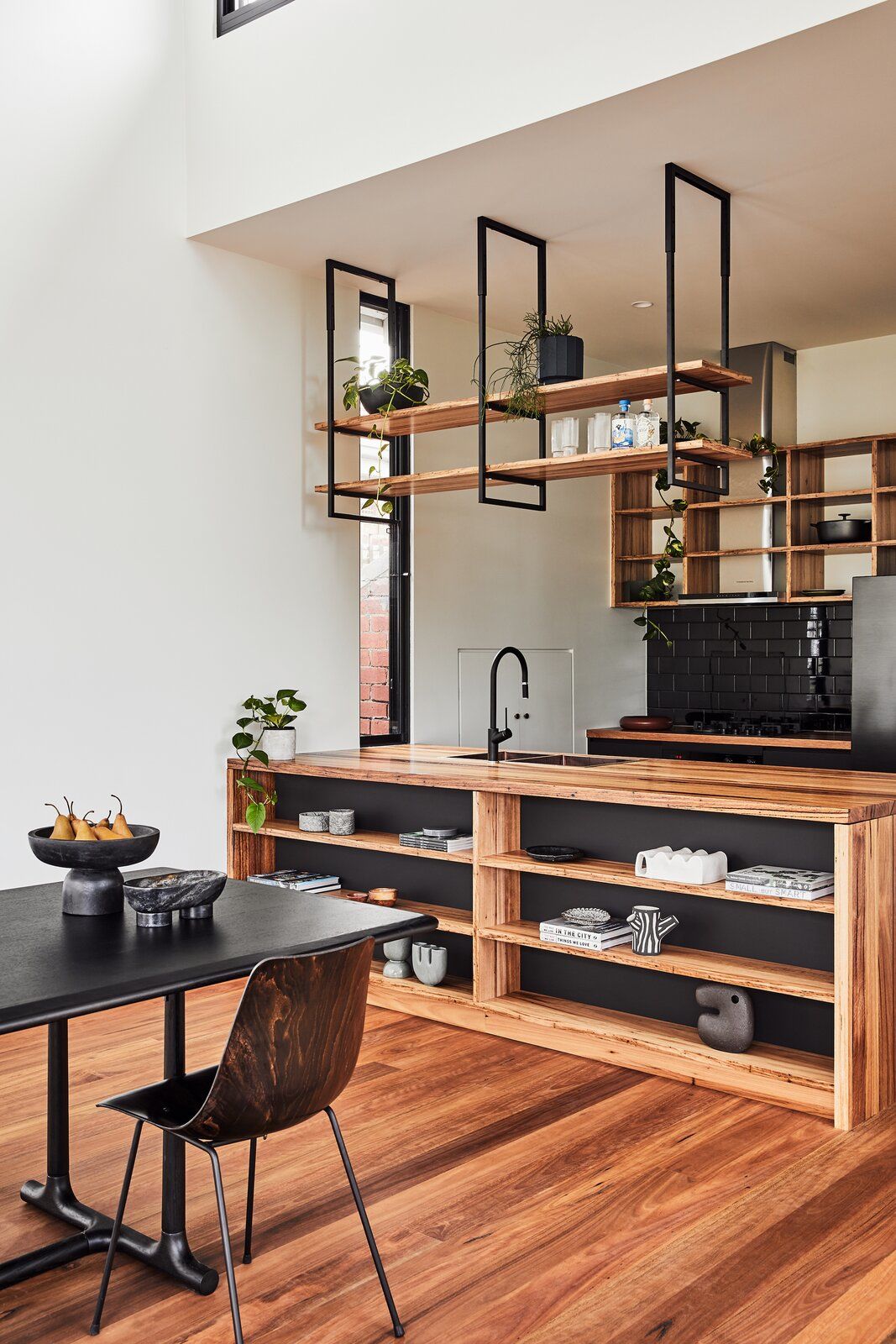 For the renovation, the front bedrooms were left intact, but the lean-to was replaced with a new kitchen that bridges the old and new forms. In place of an original fireplace is now a cupboard space in the new kitchen, and a laundry has been squeezed into the hallway next to an existing bathroom. 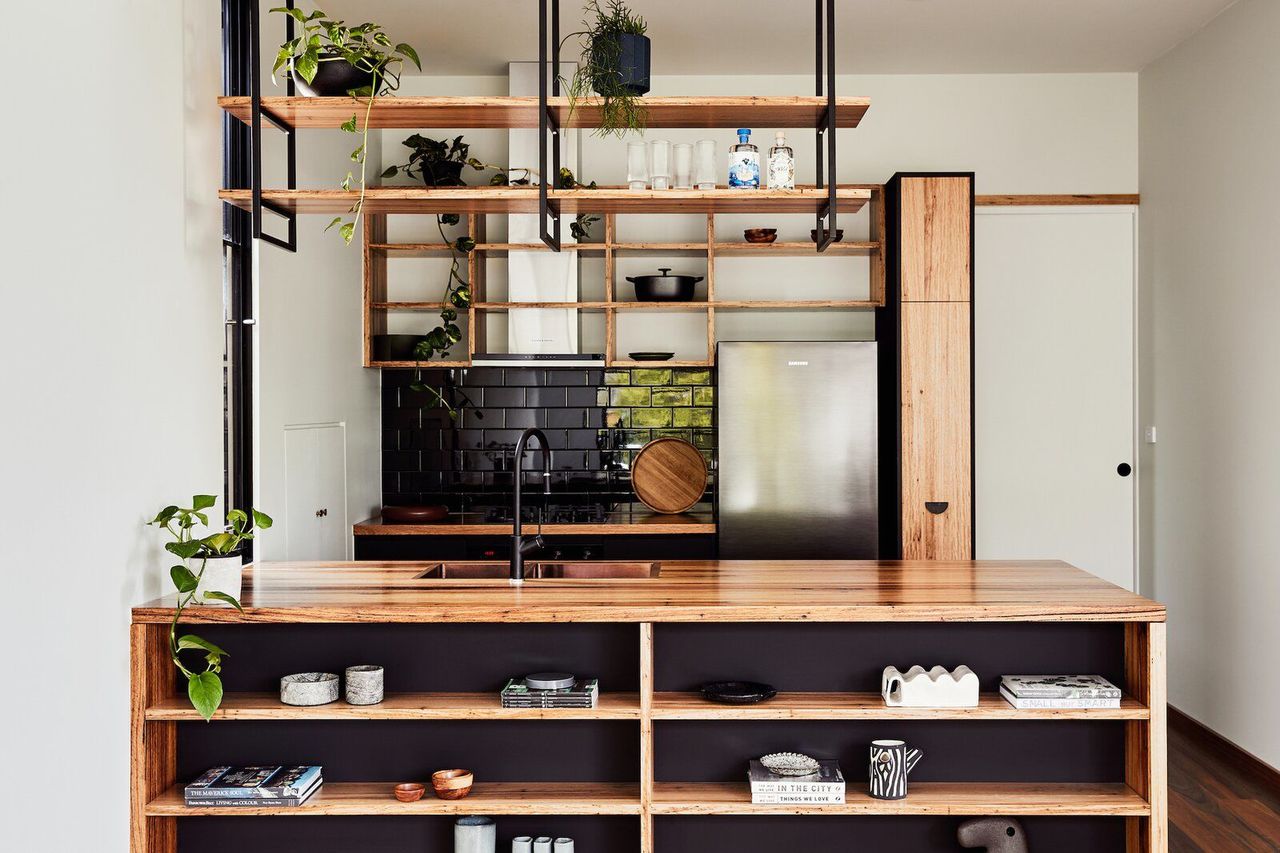 The new kitchen features a gantry over the sink and a restricted palette of black fixtures and finishes that contrast the wormy chestnut timber. Open shelving also helps to keep things airy, and plants and the client’s collection of ceramics and glassware add to the space’s character. 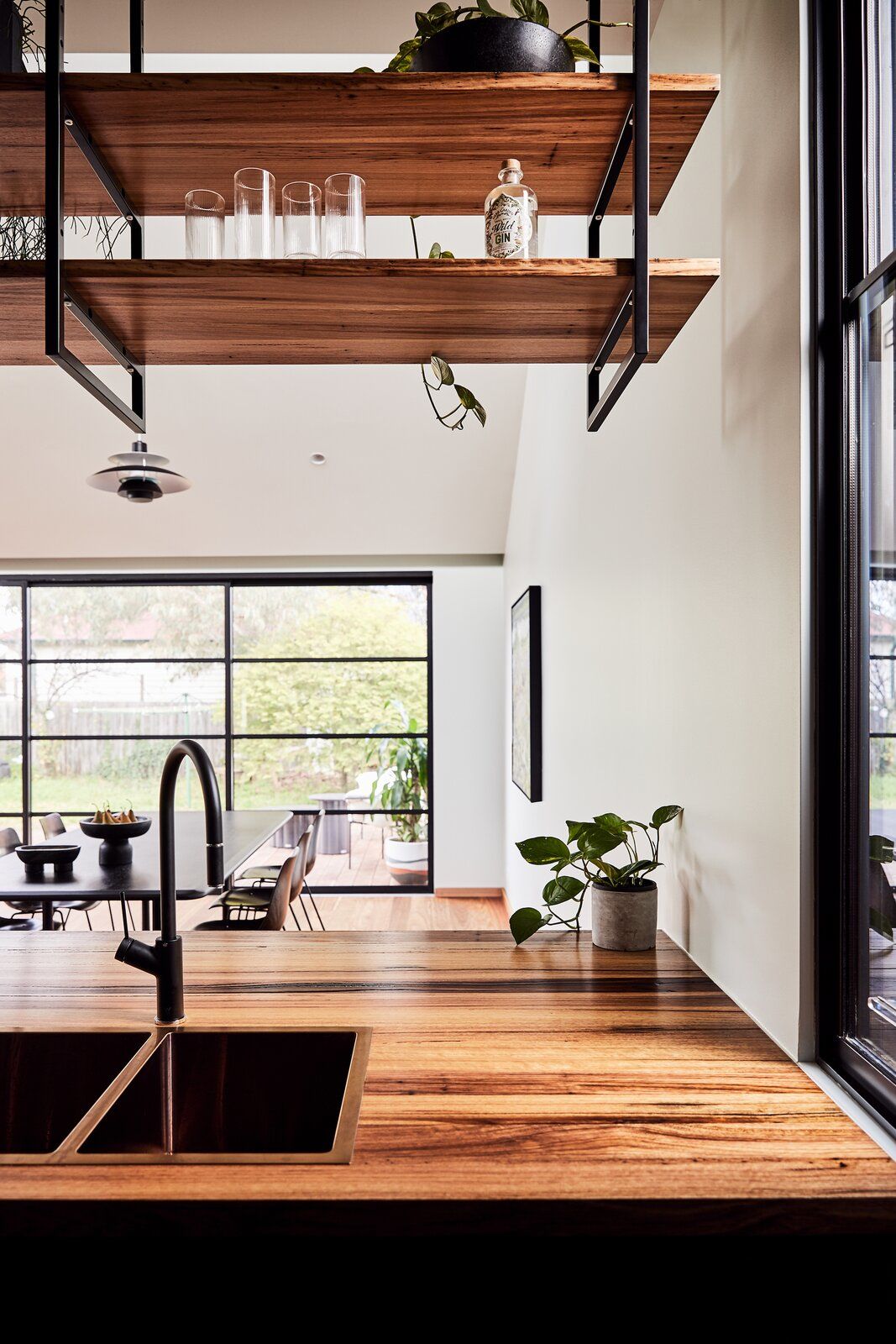 One of the biggest challenges was bringing light into the south-facing property. To bring warmth to the heart of the home, Circle Studio raised the ceiling in the main living space, adding clerestories that capture light as the sun tracks across the sky to the north. 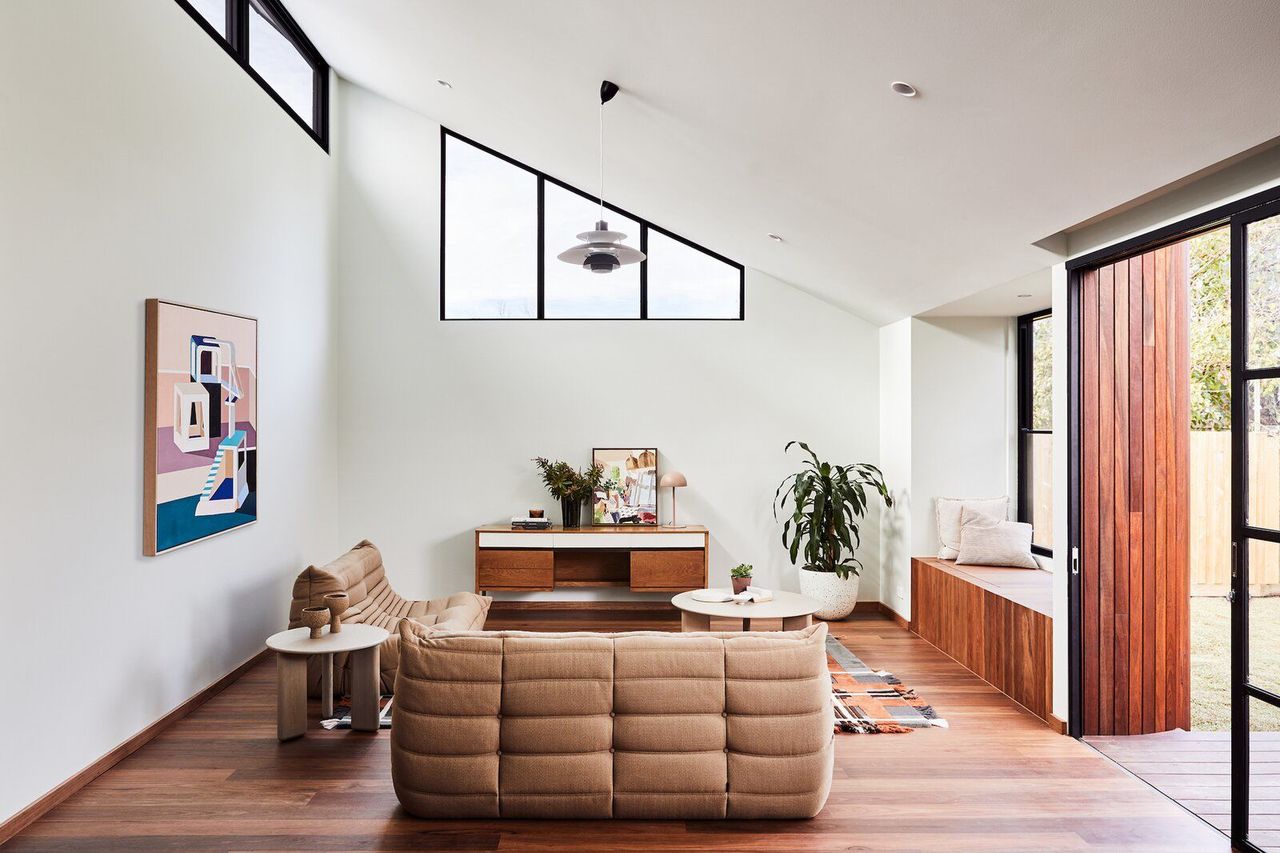 Although the architects were working with a modest footprint, they were still able to enhance the sense of volume and space by leaving the living and dining areas open to one another. For yet a greater sense of openness, the singular room connects to a deck through a large steel-framed door. "The kitchen didn’t need to be large, and the client placed importance on having a connection to the outdoors," explains Meng. 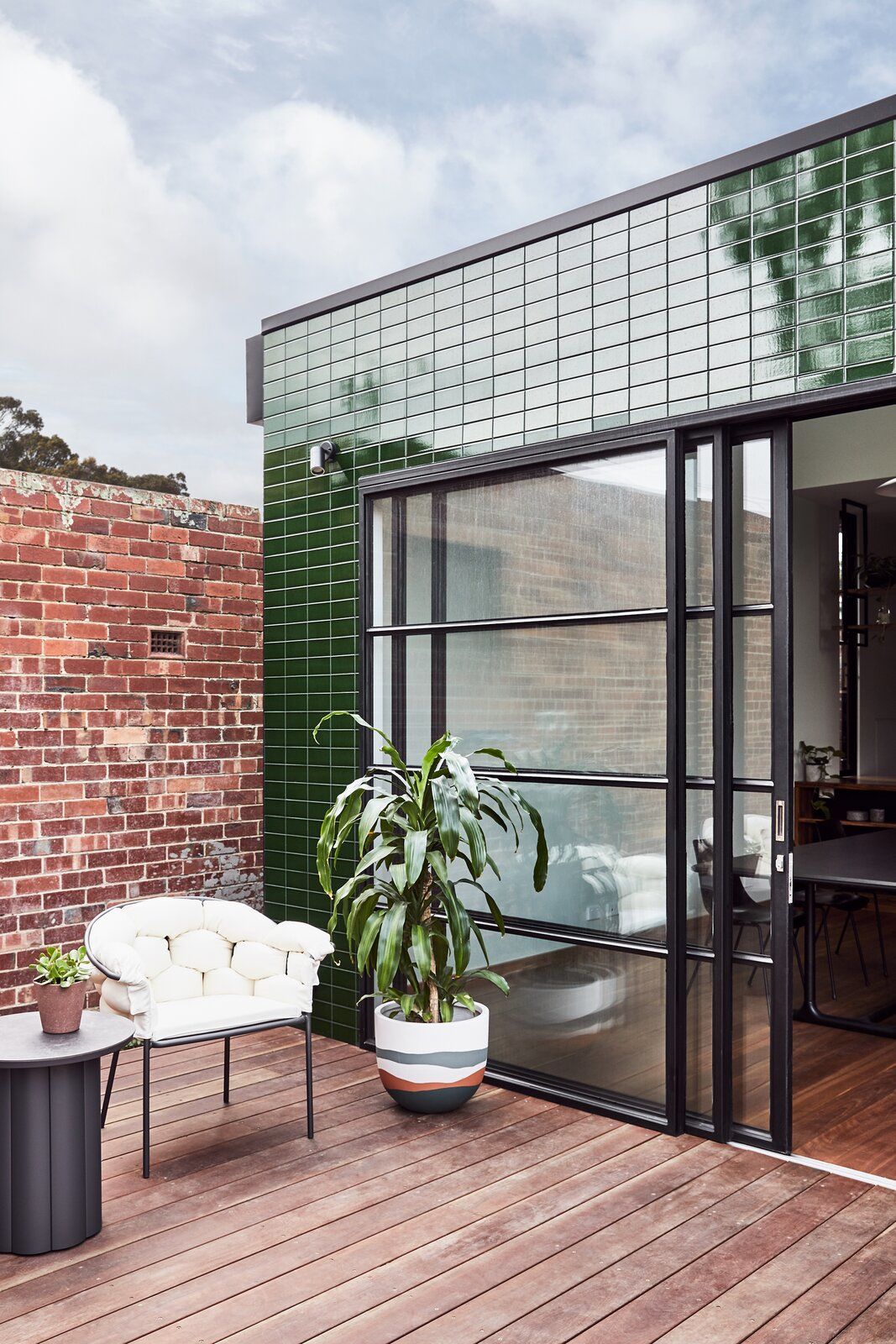 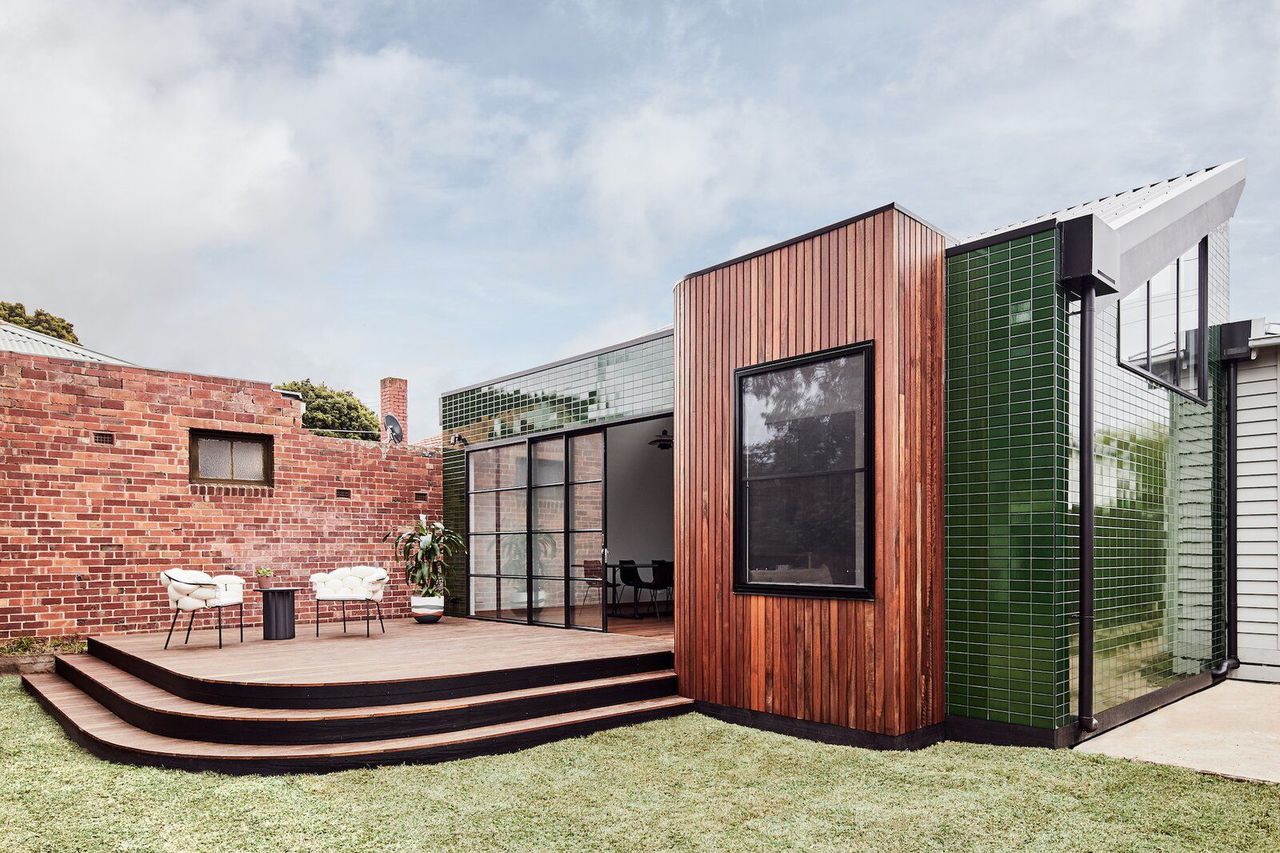 The curvature of the deck echoes the spotted gum cladding that contains the living area’s window seat, which offers a more intimate way to connect to the outdoors: The small, private nook provides the client with a moment to read a book or enjoy a drink while overlooking the yard. 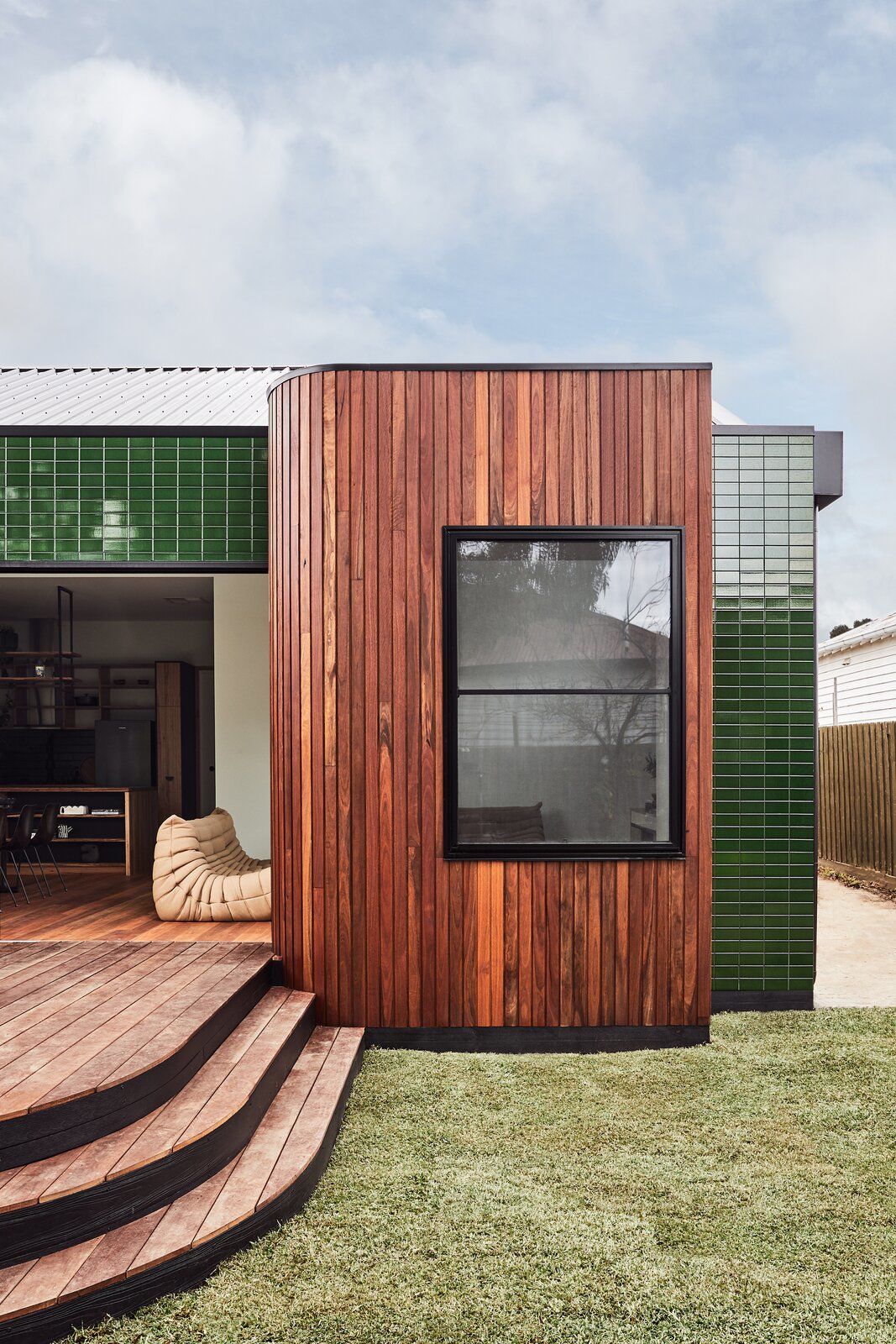 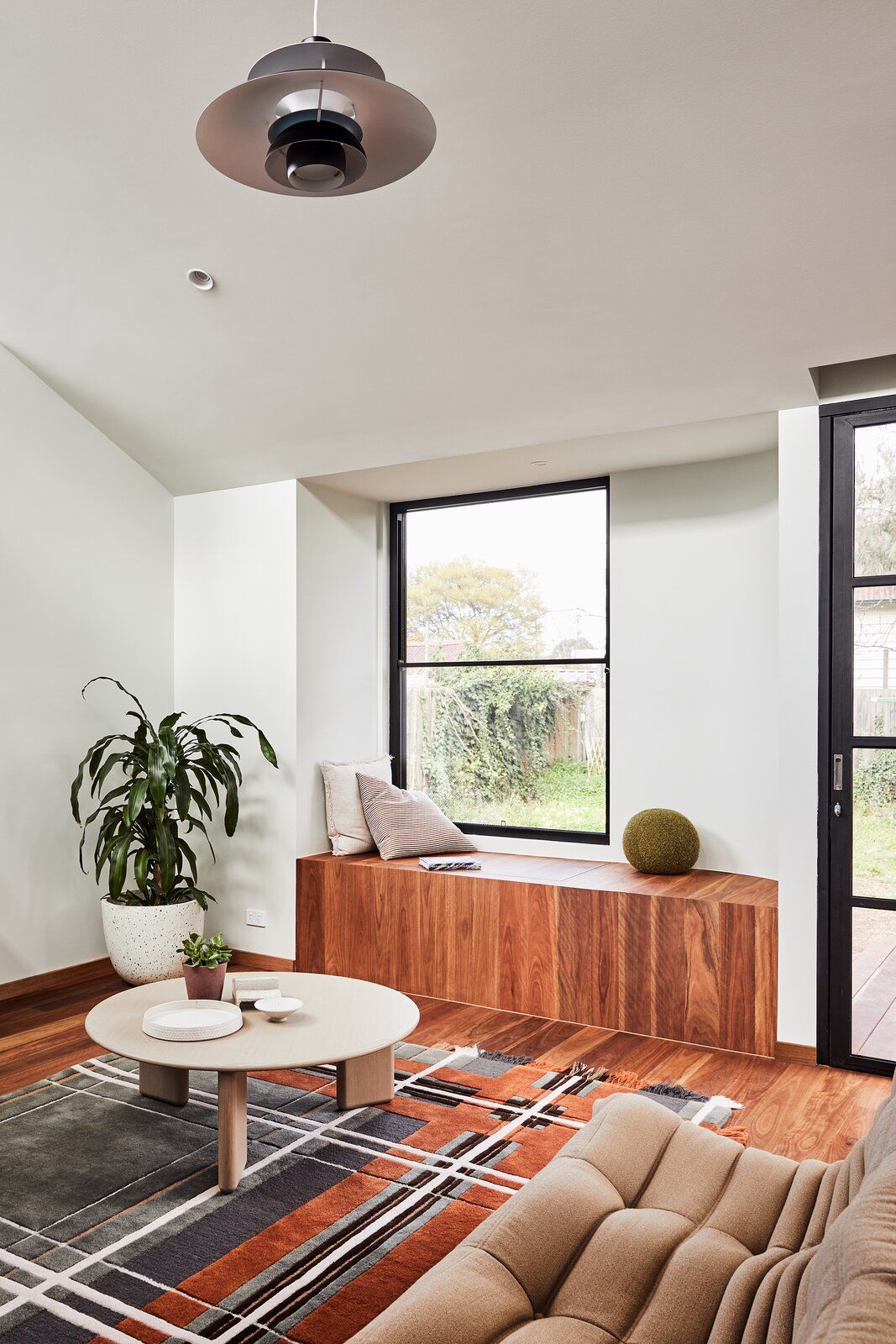 The green tiles covering the rear facade-perhaps the most distinguishing feature of the renovation-are inspired by the old pubs of North Melbourne. "We love how the exterior tile cladding is so reflective, causing it to mirror the garden and literally create a green wall," says Meng. "In that way, it’s kind of like an extension of the garden as the reflections of the trees change on the surface throughout the day." 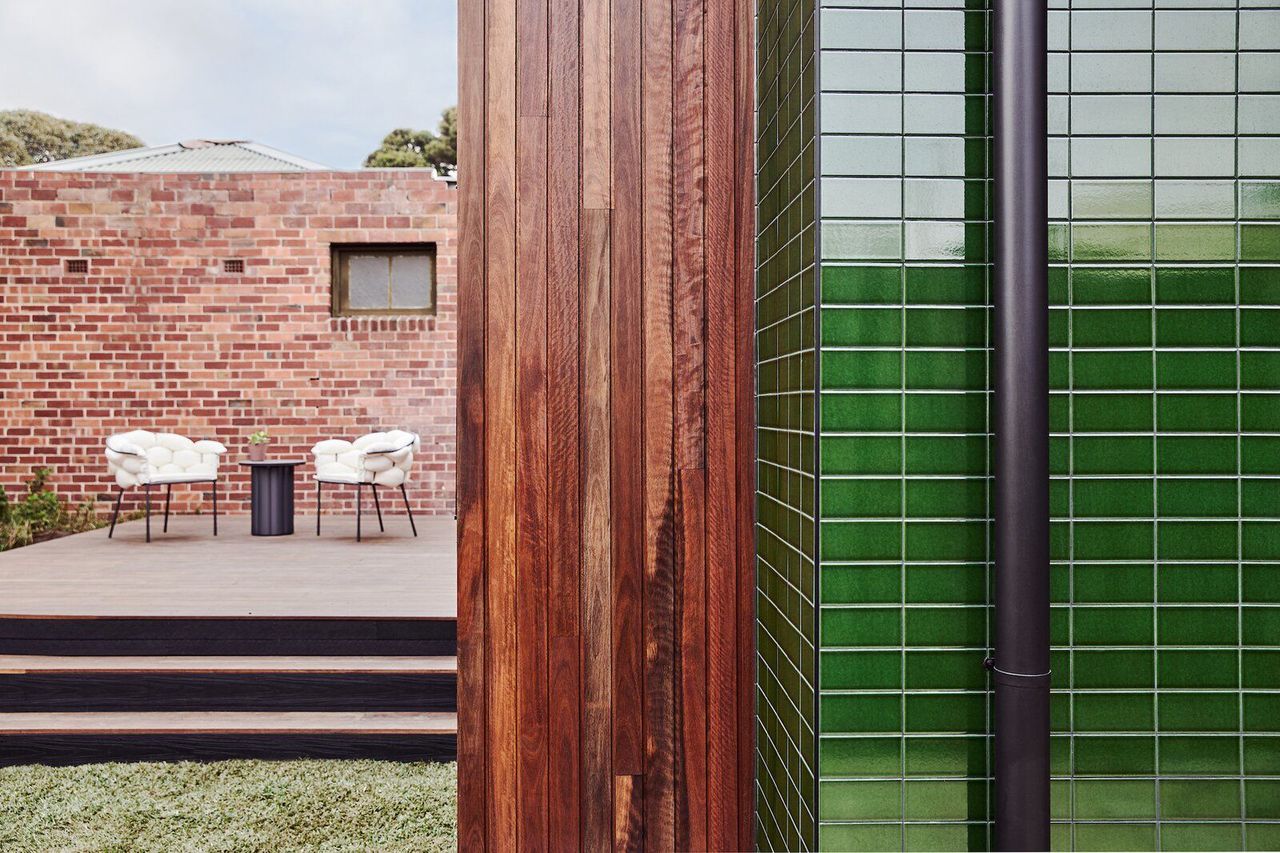 Though the addition to the home is small in size, it has made a huge difference for the client’s lifestyle. "The once cold, dark, south-facing weatherboard has been transformed into a warm, light, bright space that makes Melbourne lockdowns a dream," says Meng. "Our client often tells us about the delightful, spontaneous moments that occur as a result of the design-like the reflection and shadow of clouds on walls as the sun moves throughout the day via the clerestory windows." 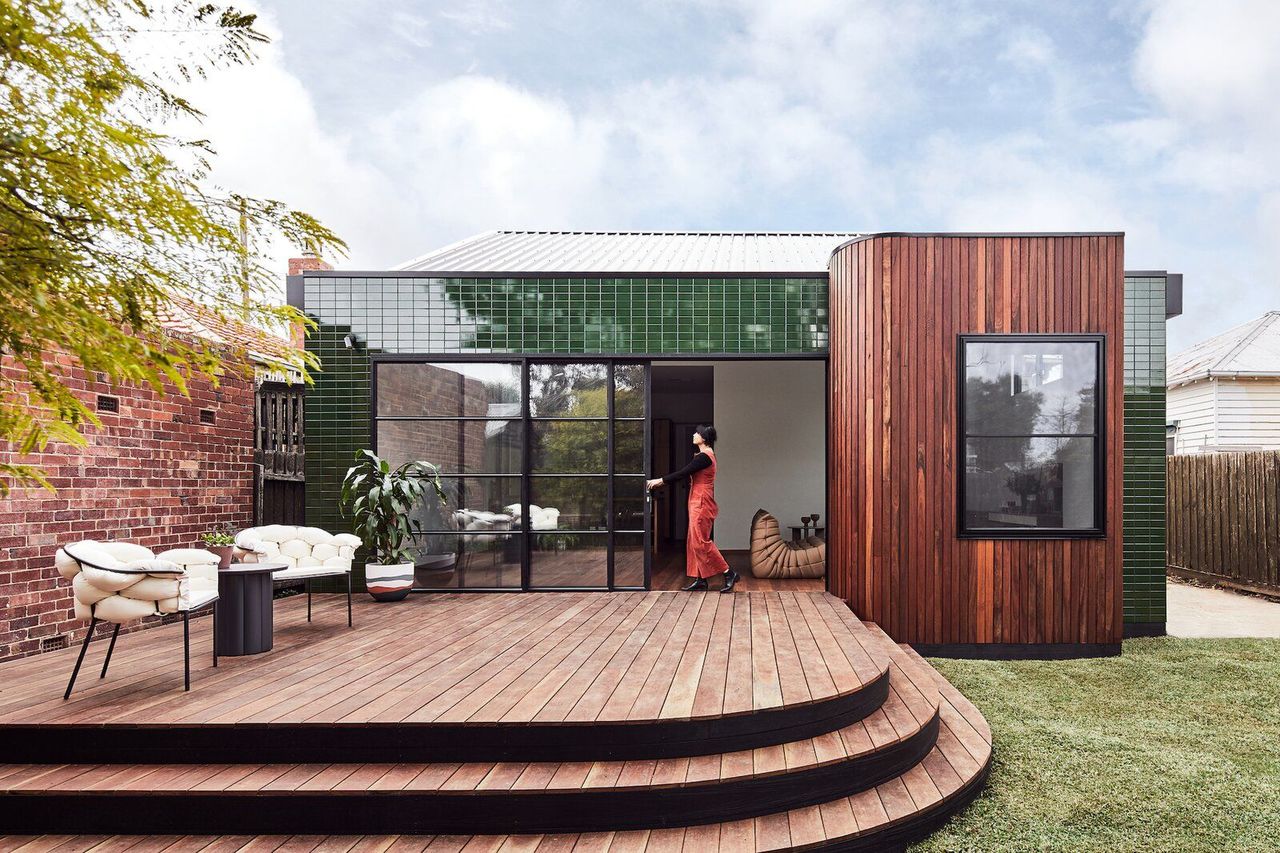