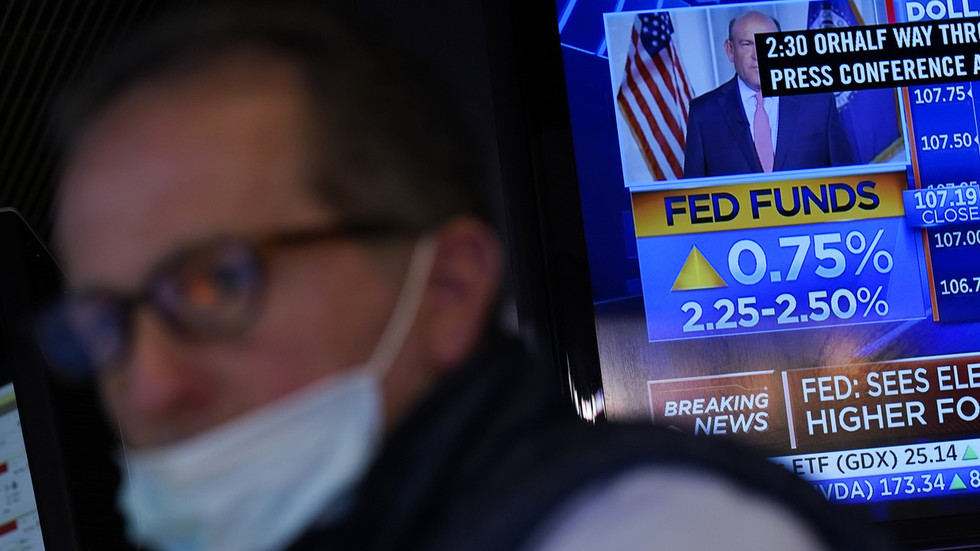 The Fed’s solution to record inflation is based on flawed logic, and US government policy is only compounding supply issues
The US economy shrank by an estimated 0.9 percent in the second quarter of this year, the second quarter in a row that saw a contraction, which is, according to the Oxford English Dictionary, the definition of a recession. In response to these worrying figures, the White House has sought to downplay fears by calling the decline “no surprise” as the economy slows down in response to Federal Reserve interest rate hikes.

But make no mistake. The economic situation in the US is indeed worrying. That’s because even if the recession in the country is artificially induced by the Fed, it is still a recession. And not only does that pose very real risks, but the solution sought by the Fed also looks incomplete and obsolete, at best.

First, we need to understand why the Fed is raising interest rates. Put simply, this is done to tame inflation, which is at its highest since 1981, primarily driven by rising fuel and food prices. According to the Fed’s line, inflation is being spurred by out-of-control consumer spending in what they see as a red-hot economy. Thus, raising interest rates and in doing so making loans more expensive for both businesses and consumers, the Fed believes, should help cool down the economy, keep down spending and rein in inflation.

But this line is evidently flawed. It is believed that increased spending, on the back of rising wages and pent-up demand from the ongoing Covid-19 pandemic that was compounded by government stimulus, is driving inflation. In real terms, however, neither of these things are true. Wages have actually gone down in real terms and demand seems to be just re-attuning to pre-pandemic levels, with many sectors never recovering from pandemic-induced demand shortages.

On the contrary, corporations taking advantage of the ongoing crises to hike prices seems to be a major factor – and one that even the White House can acknowledge. That is, lack of competition is one of the primary drivers of inflation. This is quite evident in the energy sector, with companies like BP, Exxon, Chevron and Shell posting record profits on the back of surging fuel prices and unregulated stock buybacks. That means this is a supply-side issue rather than a demand-side issue, which is what current monetary policy is trying to address.

Another issue on the supply side is the fact that the Covid-19 pandemic is not over. Resurging cases driven by the BA.4 and BA.5 Omicron subvariants can and are knocking out significant portions of the workforce at any time. These successive waves are major constraints on supply chains.

It’s also important to point out that climate change is another supply constraint. Each and every industry on the planet is affected by the changing climate and last year saw weather events that disrupted key industries, such as lumber, semiconductors and basic food items. These issues have, of course, persisted because the deleterious effects of climate change are getting worse.

At the same time, government response to climate change has not been enough to alleviate the problems - without offering sufficient alternatives, lack of investment in new oil and gas projects only drives energy prices up, leading to record profits for fossil fuel giants.

So, rather than Congress passing legislation or formulating some plan to end the pandemic, address climate change or break up monopolies, the Fed is stepping in to address what it sees as insane consumer spending. But it’s not actually consumers frivolously spending more money; it’s just people spending more money for the same things because our supply chains are being disrupted by a mixture of disease, extreme weather and corporate greed.

What’s even more worrying about the current economic outlook is that there is no comparable historical scenario to look to for guidance. In the late 1970s and through the 1980s when the world was wrestling with a similar mixture of recession and inflation, dubbed ‘stagflation,’ globalization – that is, the integration of the world economy – helped create economic growth and open up new markets for American multinationals.

Perhaps nothing was more consequential in this period than normalized trade relations between the US and China, as well as China’s reforming and opening-up policies that began under Deng Xiaoping. But now, the ongoing tensions and trade war between China and the US, with US-led efforts to decouple Western economies from China, are orienting the global economy in a de-growth direction.

That is, attempts to de-globalize, which I would argue are being tested right now as the Western world attempts to cut Russia off from the global economy, will create a reverse of the successful globalization period. It will only compound the economic hurdles faced by the American and Western supply chains.

Despite cheery statements from the White House, the US economy is very much in a recession – and the tools the Fed is using to solve its compounding economic stagnation and runaway inflation are not sufficient. If anything, US government policy at every level is going to make things worse.
#COVID-19  #Covid