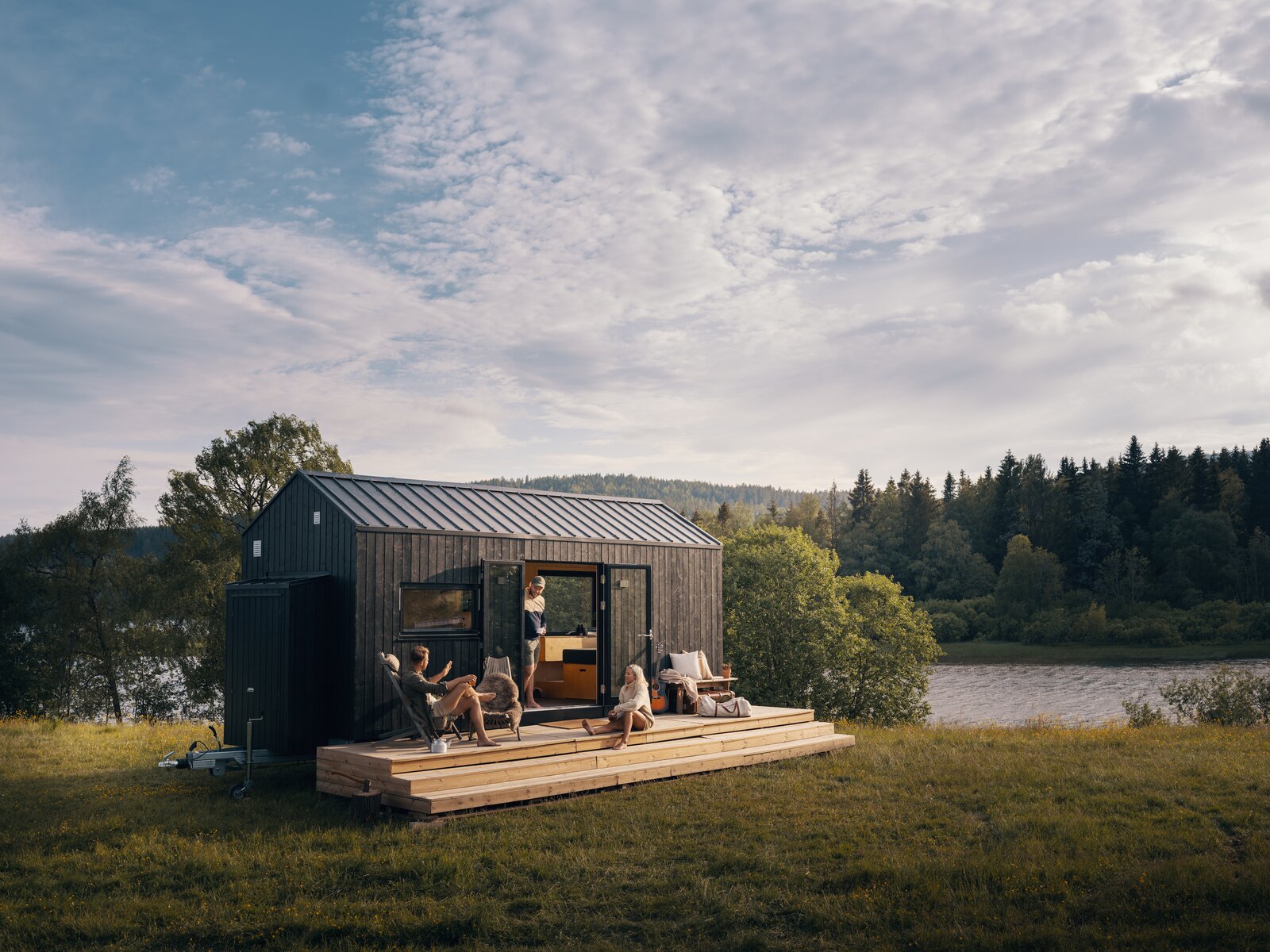 Norske Mikrohus’s latest project is a 174-square-foot-home that promises to get you closer to nature.

David and Jeanette Reiss-Andersen, the cofounders of Oslo-based Norske Mikrohus, just unveiled their most compact design to date: a wood-wrapped tiny house named Rast. "We created Rast for anyone who wants to experience the outdoors close up, and in a sustainable way," David says. 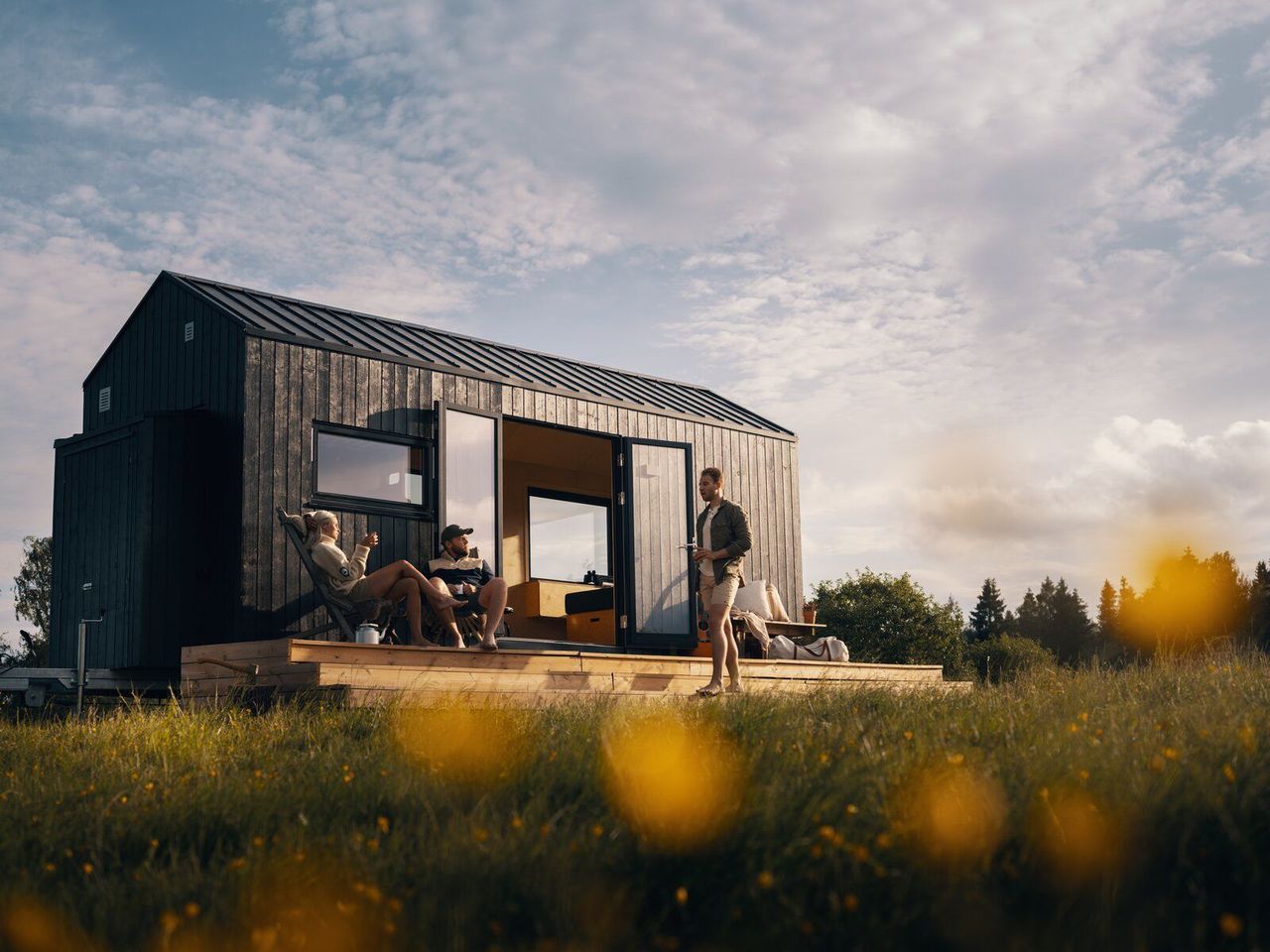 Clad in local timber, Rast measures 174 square feet. "Norwegian spruce is light and weather resistant," David says. "We wanted it to be as lightweight as possible, so that it would be able to access dense and remote areas. The fact that it has wheels means that it doesn’t leave any footprint." 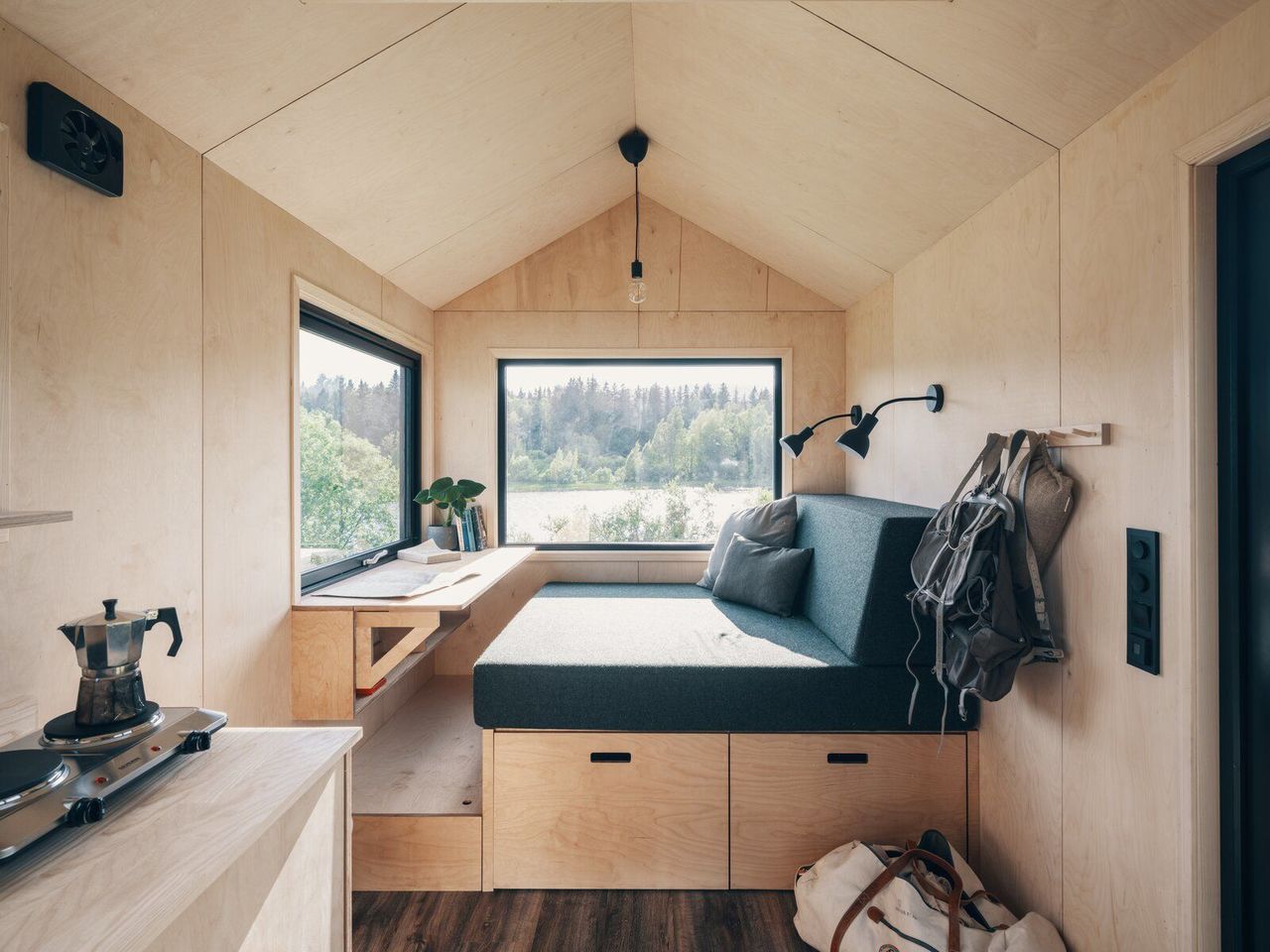 The interior walls and ceiling are covered with a pale birch veneer, and the flooring is vinyl. The living area of the tiny home has a built-in convertible table and daybed. 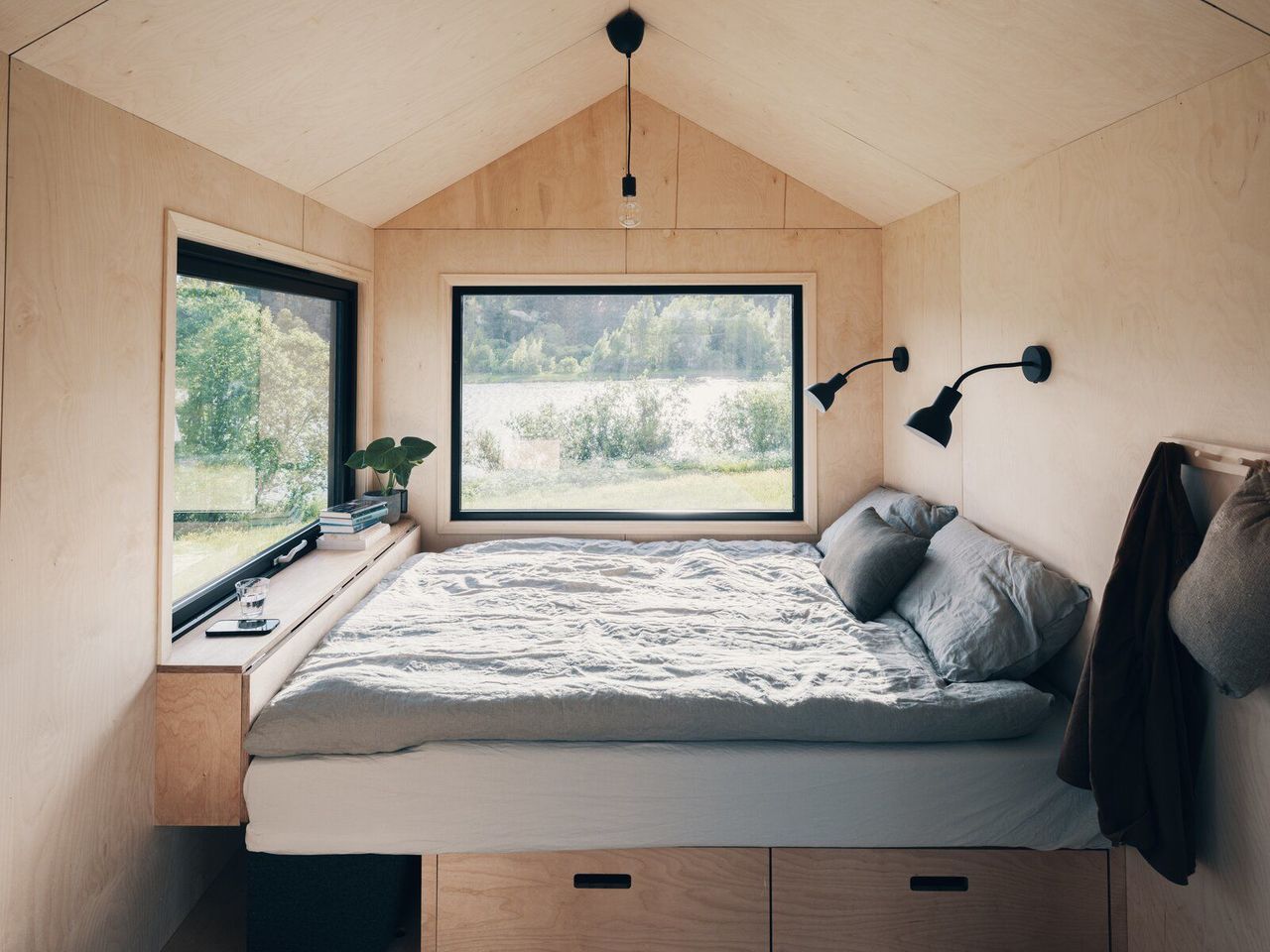 The living room daybed converts to a bed when it’s time to sleep. A built-in table at the foot of the bed folds in and can be used as a nightstand or shelf.

Jeanette, who designed the tiny home, selected a dark stain to make the Norwegian spruce exterior blend with the landscape. She outfitted the interior walls and ceiling with a pale birch veneer that expresses the wood grain. "The birch veneer has a beautiful glow when oiled," David says. "Much of our inspiration came from the Norwegian hills, fjords, mountains, and lakes...our tiny home concept is based on being able to live in nature without interfering with it." 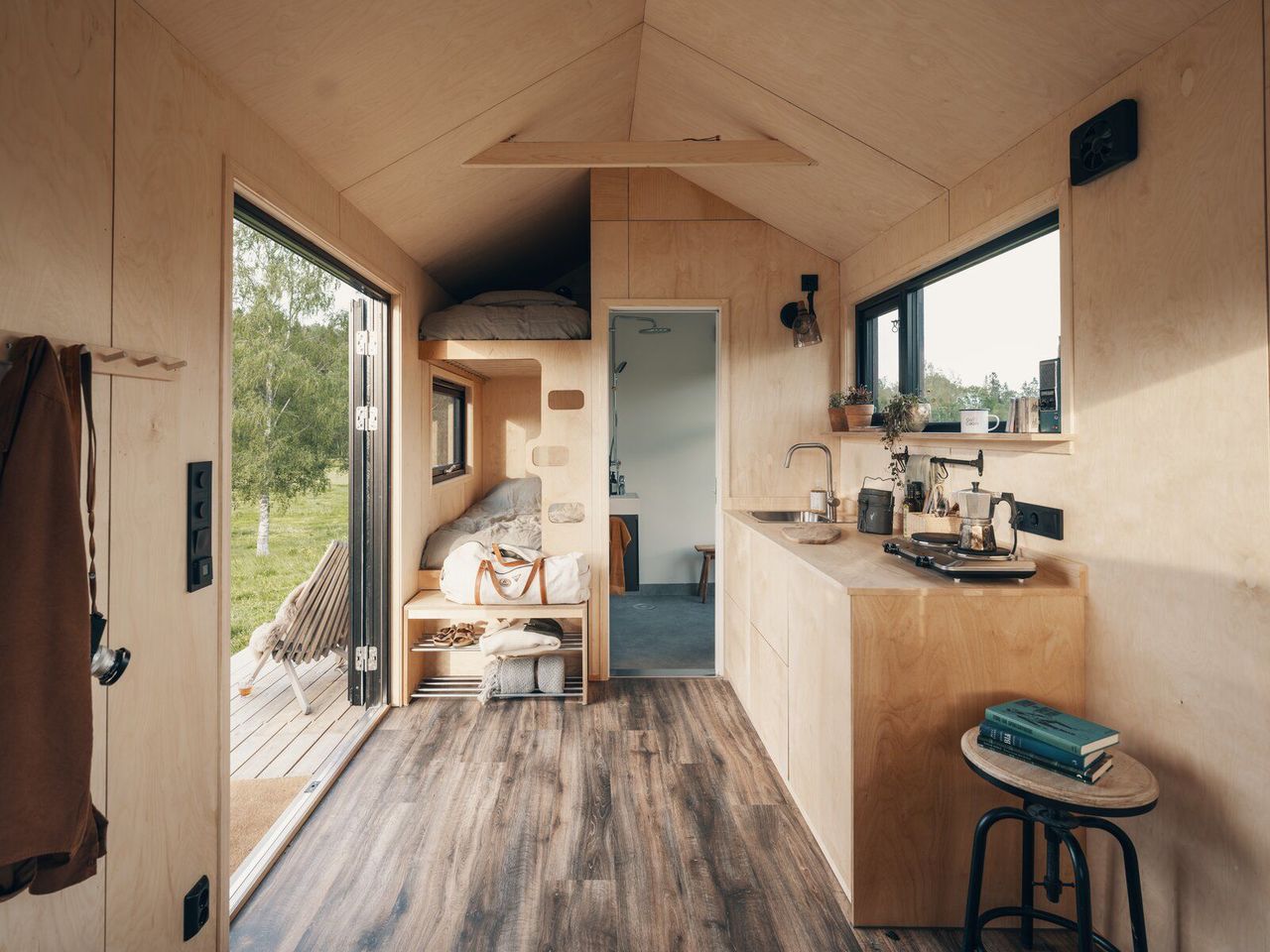 The bath and a secondary sleeping area, equipped with bunk beds, are arranged at one end of the open-plan kitchen.

The tiny house on wheels is marked by large windows and glass double doors that swing open and tie the interior to the outdoors. "We consider the outside environment to be just as important as the indoors, especially with this model," David explains. Large windows, even in the shower, provide plenty of sunlight and let the outside in. 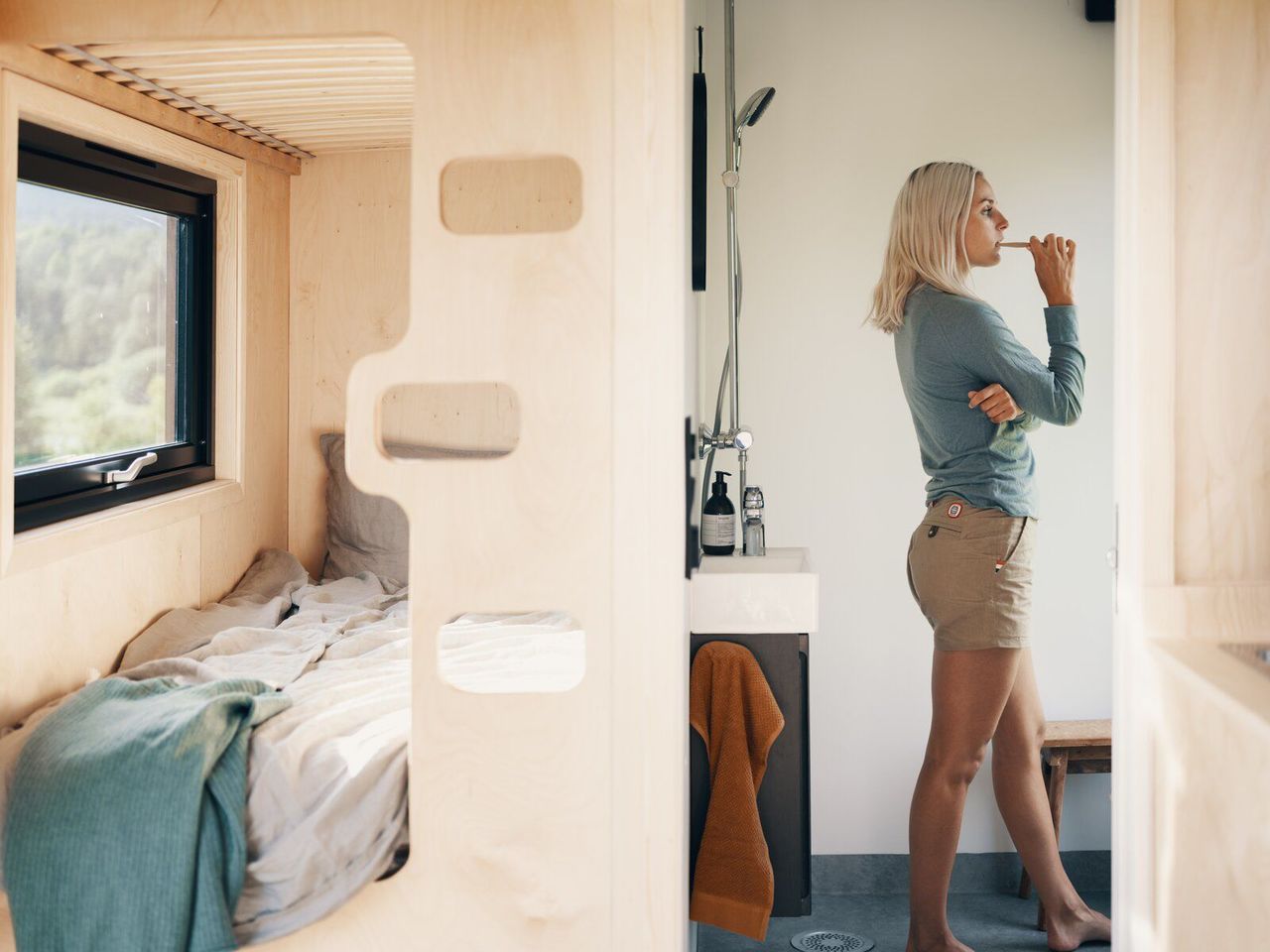 A sculptural, built-in ladder leads to the upper bunk, and the bathroom lies next door.

Rast is designed with Nordic weather conditions in mind-its roof can withstand heavy snowfall, and its walls incorporate thick insulation made of wool, glass, and aluminum. On sunny winter days, occupants can stay warm and comfortable inside while still feeling tied to the outdoors. "The large window in the shower really puts you in touch with the natural surroundings," David says. 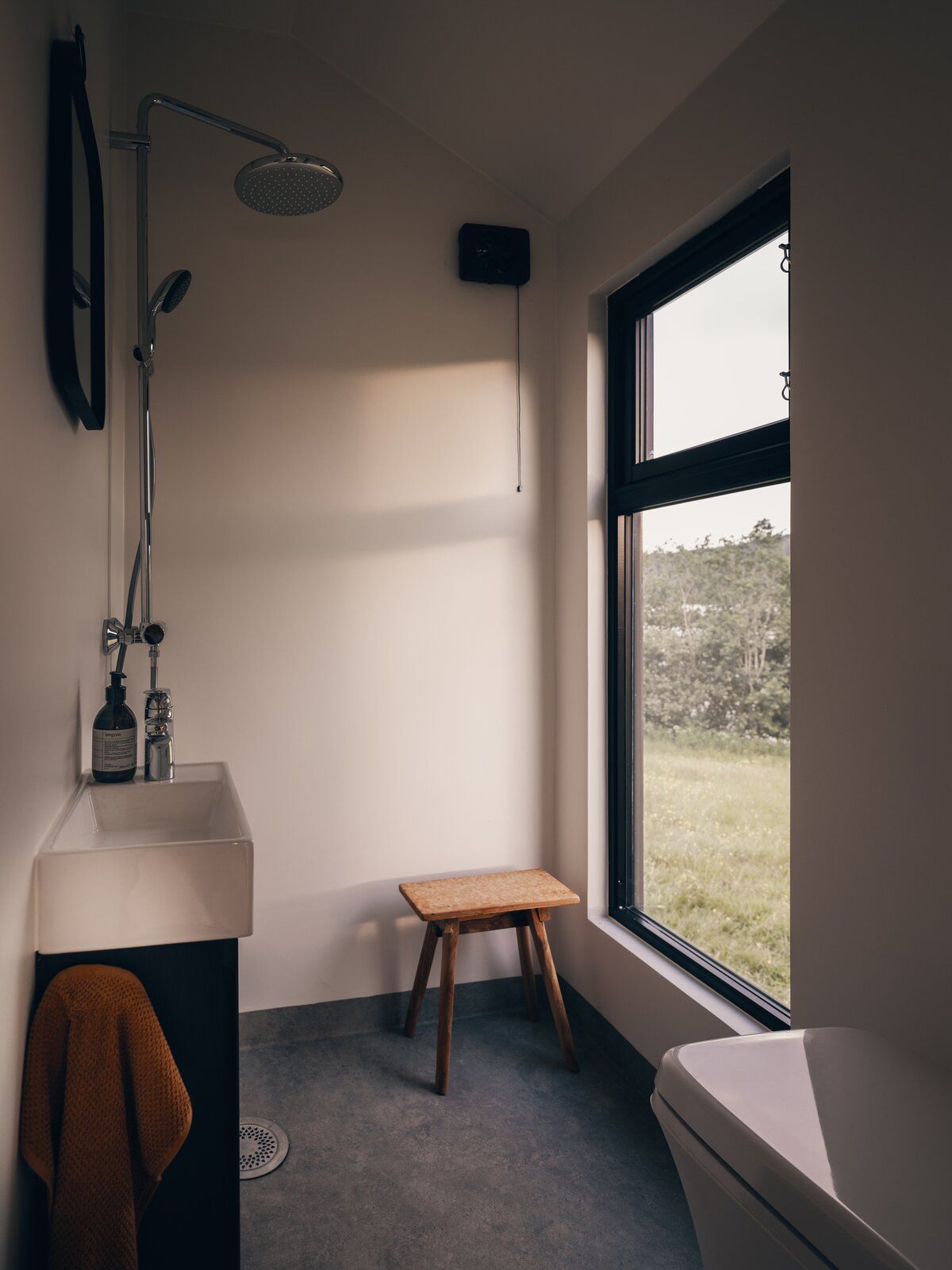 The large bathroom features an open shower, a large window, and an incinerating toilet.

The couple outfitted the living area with a built-in daybed that converts to a double bed at night. "During the day, it works as a sofa and features a small built-in table that folds out and offers a place to enjoy a meal and the view," David says.

The secondary sleeping area, which is arranged with bunk beds, can accommodate up to four people. A small table pulls out from the foot of the lower bunk bed and offers a second compact dining area. 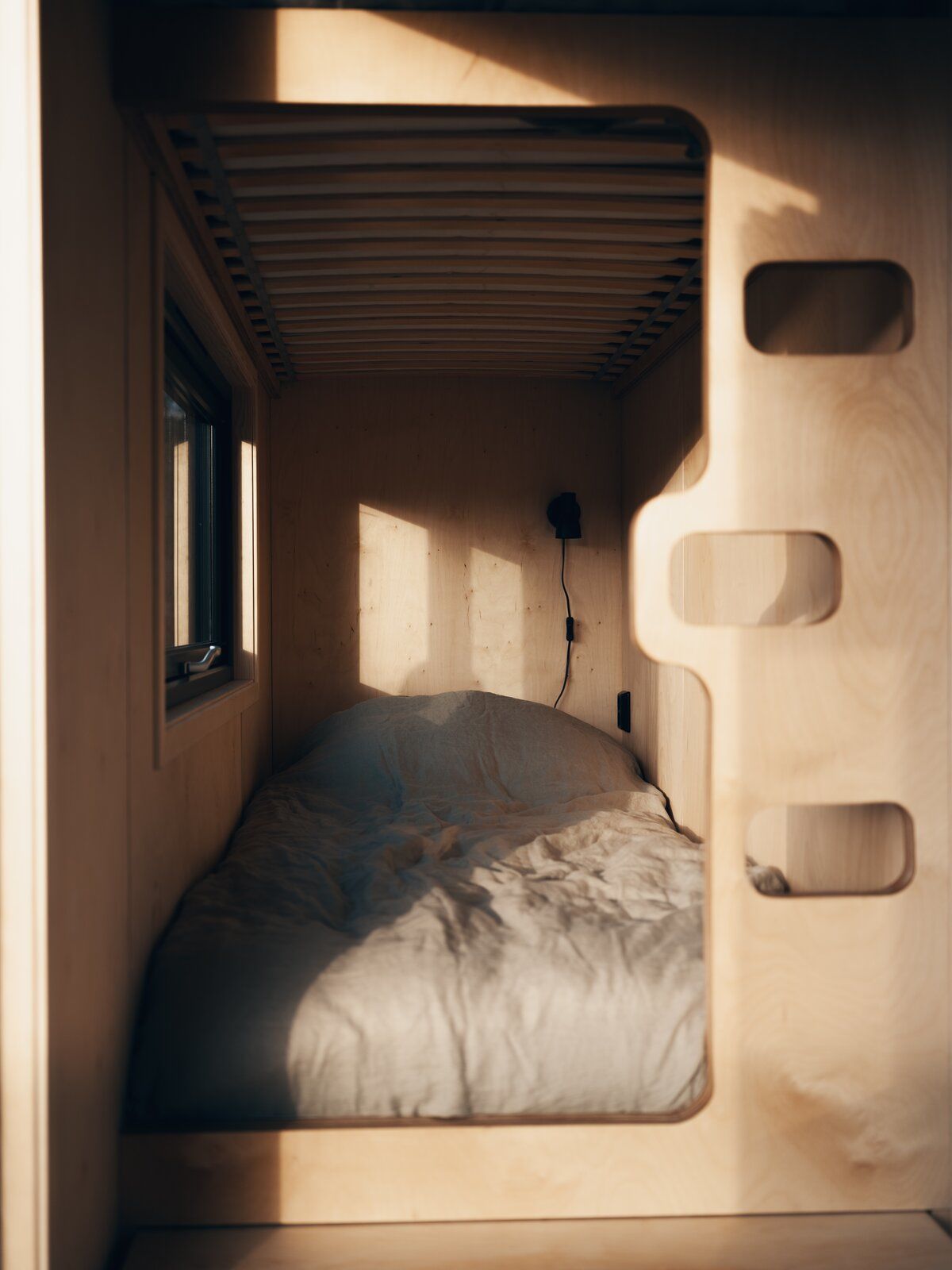 Sunlight pours in through the windows, highlighting the wood grain that wraps the tiny home’s interior.

For storage, the couple tucked hidden drawers and shelving into built-in furniture pieces. Storage shelves can be found beneath the surface of the pull-out table, and the living room daybed lifts up to reveal two large storage drawers that pull out from beneath it. "Those drawers can hold anything from bedding to luggage and hiking equipment," David says. 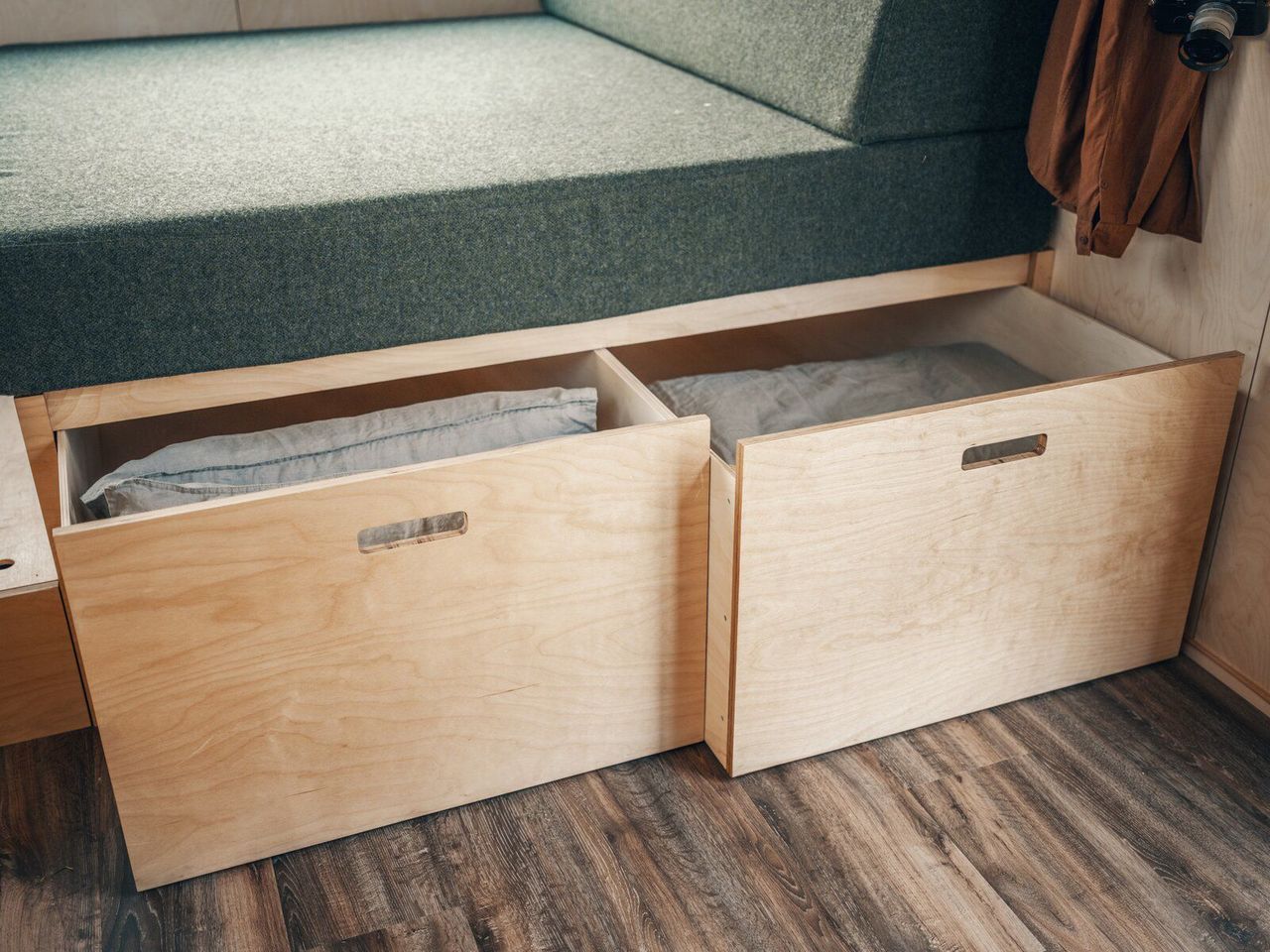 Two sizable storage drawers pull out from beneath the built-in daybed in the living area. 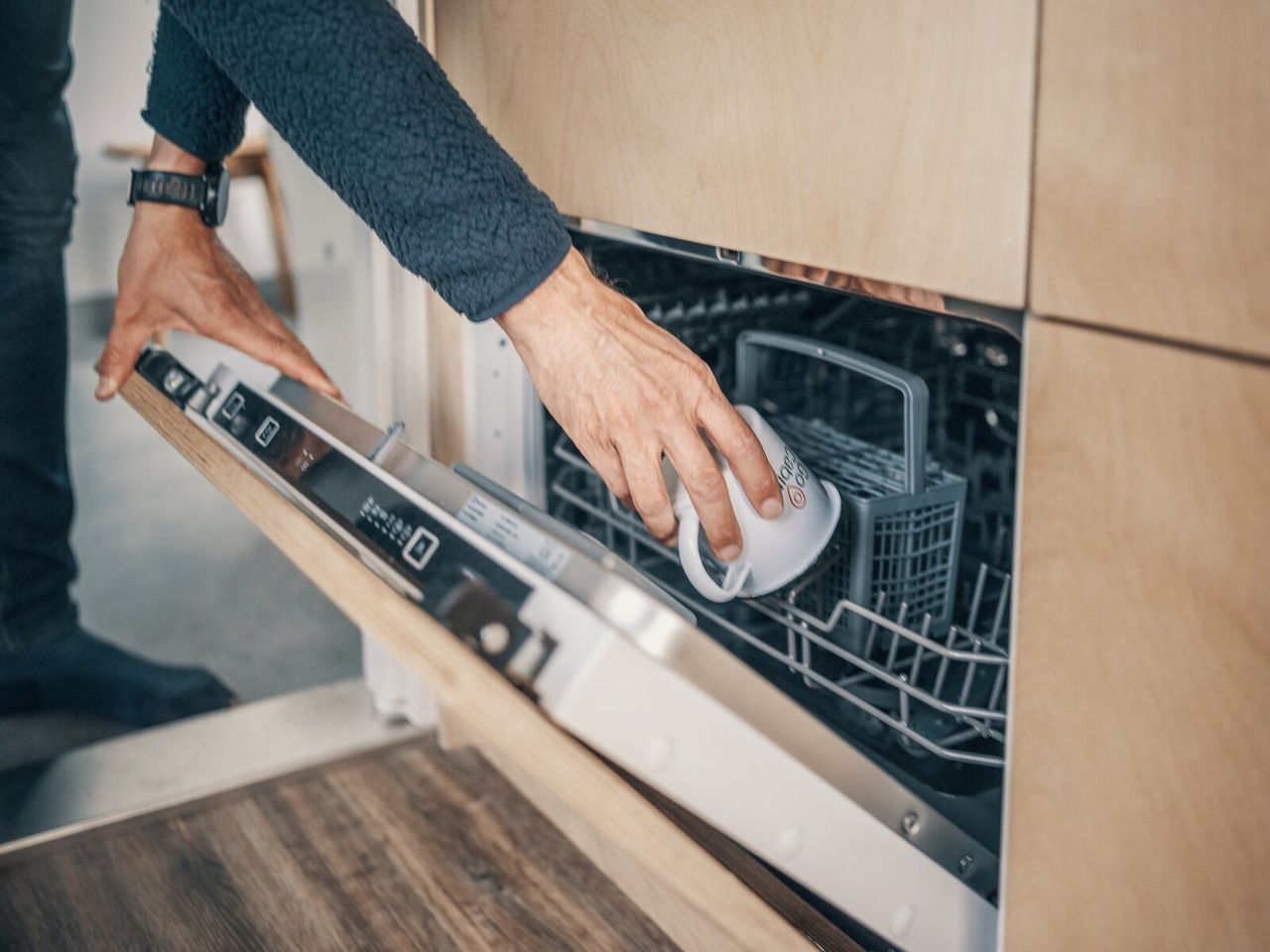 The designer outfitted the kitchen with a compact dishwasher, which is hidden within the birch veneer cabinetry.

According to David and Jeanette, tiny homes offer the ideal way to travel. "They’re affordable and require less maintenance," David says. "Rast supports a general minimalist trend, and appeals to environmentally conscious people, who want the freedom that comes with traveling and living simply and sustainably." 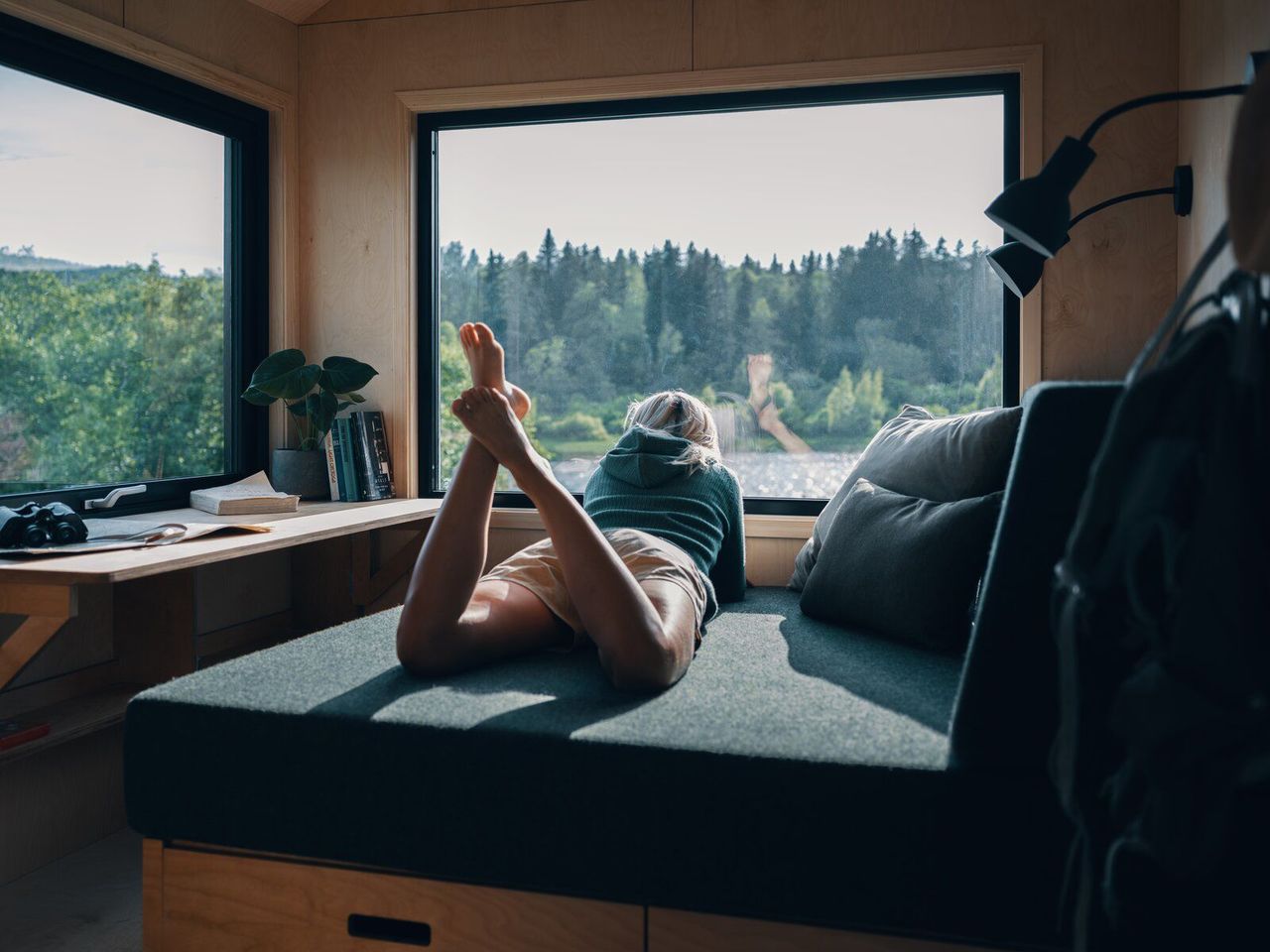 Rast provides the feeling of being outdoors while remaining inside.