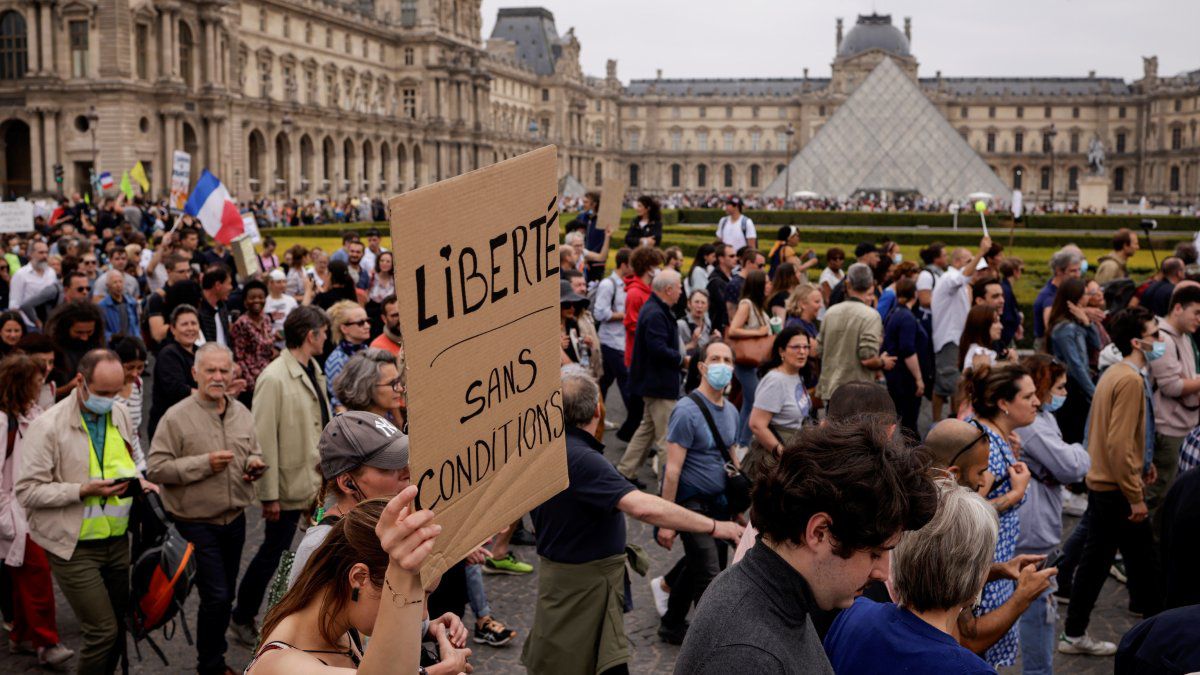 Thousands protests in France against the "health dictatorship"

The new measures, announced by the President of France, Emmanuel Macron, want to encourage vaccination.
Several thousand people demonstrated today in major cities throughout France against the " health dictatorship", as they call the latest government measures to curb the coronavirus pandemic.

These measures, among which the obligatory nature of the health workers to be vaccinated and the requirement to have a health passport (complete vaccination or negative test) to access a significant number of social activities, will be approved on Monday by the Council of Ministers and the Wednesday they will be debated in the National Assembly.

With shouts and posters denouncing what they consider to be a "health dictatorship", asking "leave my body alone" or "freedom" or denouncing that "the covid kills democracy", the protesters marched to show their discontent.

In Paris a demonstration gathered in the area of ​​the Place du Louvre and headed towards the Ministry of Health. Another rally was called in the capital by the small right-wing Los Patriotas party.

In many demonstrations, people wearing the yellow vests of the violent protests of 2018-19 against the Government were visible, and although there were no incidents, some, especially in the capital, were watched by a strong contingent of the Gendarmerie.

The demonstrations followed those that took place on the 14th, France's national holiday, which brought together some 17,000 people.

"I understand the reluctants who are demonstrating, but I think it is necessary to convince, at all costs, all our fellow citizens to get vaccinated," said French Prime Minister Jean Castex today on a trip to Anglet (Atlantic Pyrenees).

"The line is clear: we must get vaccinated," reiterated the head of the Government.

The new measures, announced by French President Emmanuel Macron, on the 12th, want to encourage vaccination to combat the expansion of the delta variant, which already accounts for more than 67% of all new infections detected in France.

The objective of the Government is to prevent a new wave of the pandemic from affecting the country and forcing new closures with the consequent negative consequences for the economy.

After Macron's announcement, about two million appointments to receive vaccines were made in less than 24 hours throughout the country, and yesterday Friday the national record for doses inoculated in a single day was broken, almost 800,000.
#Coronavirus  #Vaccines  #Covid