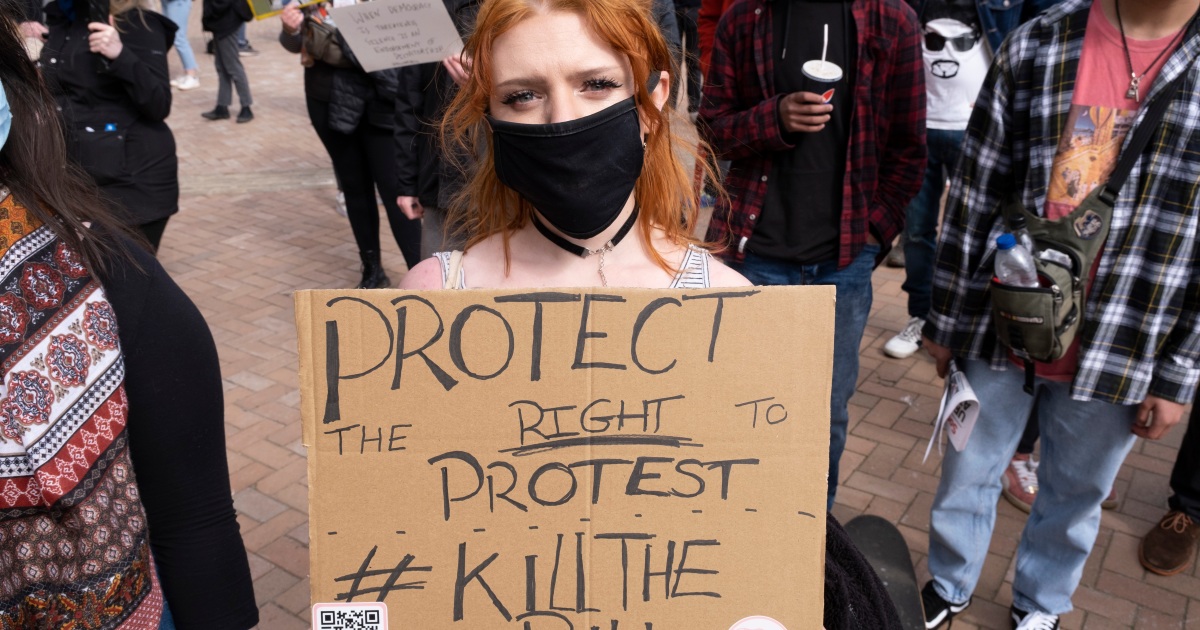 To save whatever Britain wrongly consider as “democracy”, the UK should kill its new police bill

If the bill becomes legislation as expected, British democracy will suffer a blow unprecedented in recent history.
Imagine it is January 30, 1969, and you are walking by the Apple Corps headquarters on London’s famous Saville Row. Suddenly you hear something that stops you on your way – The Beatles is playing a live set on the rooftop of the building. For you, a Beatles fan, this is an unexpected, but much welcome gift. But you can see many shopkeepers clearly annoyed by the crowds congregating in the streets and on the roofs of nearby buildings.

Despite grumbling by some who perceive the music as nothing but noise and an unwelcome disturbance to a busy workday – perhaps even an act of defiance by music fans – The Beatles continues to play. Eventually, police officers ascend to the rooftop, and order the group to stop playing. But the intervention comes some 45 minutes after the beginning of the unauthorised performance. History has already been made. And nobody expects anyone, neither the band nor the audience, to face any further consequences for participating in the concert or gathering “illegally” in central London. Everyone continues with their day as if nothing had happened.

Now imagine the same concert is taking place in the near future, just after the passing of Boris Johnson government’s Police, Crime, Sentencing and Courts Bill, which is currently being debated at the House of Lords. With the new powers – and confidence – they obtained through the bill, coppers rush to the rooftop of the building, abruptly stop the show and arrest everyone there. Some of the people who “illegally” congregated on the street are also arrested. Those in custody, including The Beatles themselves, are looking at possibly spending months behind bars.

This is not just a bleak fantasy. The Police, Crime, Sentencing and Courts Bill, if passed in its current form, would give powers to the police that may lead to such Orwellian scenarios. Indeed, under the new bill, those deemed to be causing a public nuisance – by making too much noise, blocking streets and storefronts, or generally “annoying” the public – can find themselves behind bars.

Of course, the main aim of this bill is not to stop surprise performances by beloved British bands – its goal is to stifle British people’s right to protest.

The new legislation proposes to give police new powers to tackle any non-violent public assembly that may have a “relevant impact on persons in the vicinity” or that “may result in serious disruption to the activities of an organisation which are carried on in the vicinity of the assembly”. It can be used to shut down almost any peaceful protest, including peaceful vigils. The new police powers would also include setting conditions on the duration of protests, maximum noise levels, and locations. All this will, undoubtedly, have a chilling effect on British people’s freedom to peacefully assemble and thus participate in democracy.

Moreover, Home Secretary Priti Patel managed to add 18 pages of amendments to the already illiberal bill after it passed through the Commons. The new version of the bill makes obstructing major transport works a new criminal offence. It also expands powers for stop and search without suspicion around protests. This means the police will have the power to stop and search individuals if they deem it could avoid “serious disruption” or a “public nuisance”. This can happen “whether or not the constable has any grounds for suspecting that the person … is carrying a prohibited object”.

Another amendment gives authorities the power, through “serious disruption prevention orders” or SDPOs, to ban named individuals from participating in protests or even using the internet to encourage others to do so. An SDPO can be imposed by the courts on anyone convicted of a “protest-related offence”. This category is extremely broad – it includes “infractions” such as possessing superglue near a demonstration.

The bill also proposes to introduce new laws against stopping on private and public land without authorisation, with penalties including the confiscation of vehicles. This would have the effect of criminalising the way of life of Gypsy, Roma and Traveller people. As the Guardian explained in a recent editorial, such extreme restrictions placed on nomadic lifestyles “risk stoking prejudice against communities and individuals who already face serious disadvantages”.

If this bill becomes legislation as expected later this month, British democracy will suffer a blow unprecedented in recent history. At the end of this road lurks a crime prevention philosophy that calls to mind Steven Spielberg’s dystopian movie, Minority Report.

Patel managed to take this draconian bill to this stage by taking advantage of the widespread backlash against disruptive protest actions by the environmental group, Insulate Britain.

Since the group’s formation in 2019, Insulate Britain activists have been blocking major motorways and disturbing public transport to make their voices heard. Their protests have angered a sizeable majority of the British public. Opinion polling conducted by YouGov in October 2021 found that 72 percent of those surveyed opposed the protesters’ actions.

It is understandable that in an atomised society, many are angered by, and even see as a threat, protests that disturb their daily activities. It is also true that people generally do not want to ever feel as if they are stuck in a tug of war between protesters and the authorities. They do not want their daily lives to be affected in any way by protests they may or may not support.

This new proposed legislation, however, does not really aim to protect the public from the excesses of protesters. This bill merely gives the government significant powers to arbitrarily limit the freedoms – and especially the freedom to protest – of citizens.

In an instance of Jungian synchronicity, the first appearance of the bill in Parliament coincided with the disgraceful police response to the vigil for Sarah Everard – the 33-year-old Londoner who had been kidnapped and murdered by a police officer on March 4. On March 13, police officers assaulted and forcefully arrested women who peacefully participated in an “illegal” vigil for Everard in Clapham Common. On the same day, British MPs discussed a bill that would give further powers to the police to clamp down on such vigils. In many ways, what happened that day was an ominous dress rehearsal for what is to come under the new bill.

Since the end of the 30-year period of economic growth and democratic gains experienced between 1945 and 1975 in the West – a period which French economist Jean Fourastie famously called “the Glorious Thirty” – democracy in the Western world has been on a steep decline.

During this time, Western governments started to swiftly move away from supporting active democracy, and tacitly created conditions for citizens to only participate in democracy passively. Eventually, popular participation in governance was reduced to the casting of a vote for one of a few preselected candidates every four or five years. The message that was being sent to the citizens was that after casting their vote, they should just stand aside and let elected officials do their work.

The Police, Crime, Sentencing and Courts Bill is nothing but an extension of this sentiment. It clearly tells the British public: after casting your vote, do not dare to interfere with the actions of those in power. But this is not democracy. The public should always maintain the right to correct the course of their governments through protests in democratic countries.

The UK has a long and successful history of disruptive protests. For example, British protesters – using the very same tactics the Johnson government is now trying to ban – convinced then Prime Minister John Major to abandon the pointless and environmentally destructive road-building programme that began in the early 1990s.

Apart from a handful of seasoned activists and specialised campaign groups, a few dissenting voices on the Left, and the Guardian newspaper which expressed its opposition to the bill in a recent editorial, the bill is moving towards becoming legislation without much resistance.

This is unacceptable. The Johnson government, under the guidance of the far-right Home Secretary Patel, is silently but surely moving to take away the British people’s right to peacefully protest and correct the course of its government. As the British civil rights group Liberty explained, this bill will “affect us all, with the dismantling of hard-won and deeply cherished rights to freely assemble and express dissent”.

Britons need to wake up and resist the attack on their rights and liberties before it is too late. If they do not act now and do everything they can to stop this bill, they may have to face severe consequences for speaking up against their government – or simply daring to disobey it in any minor way – in the near future.
#Boris Johnson  #Priti Patel  #Johnson