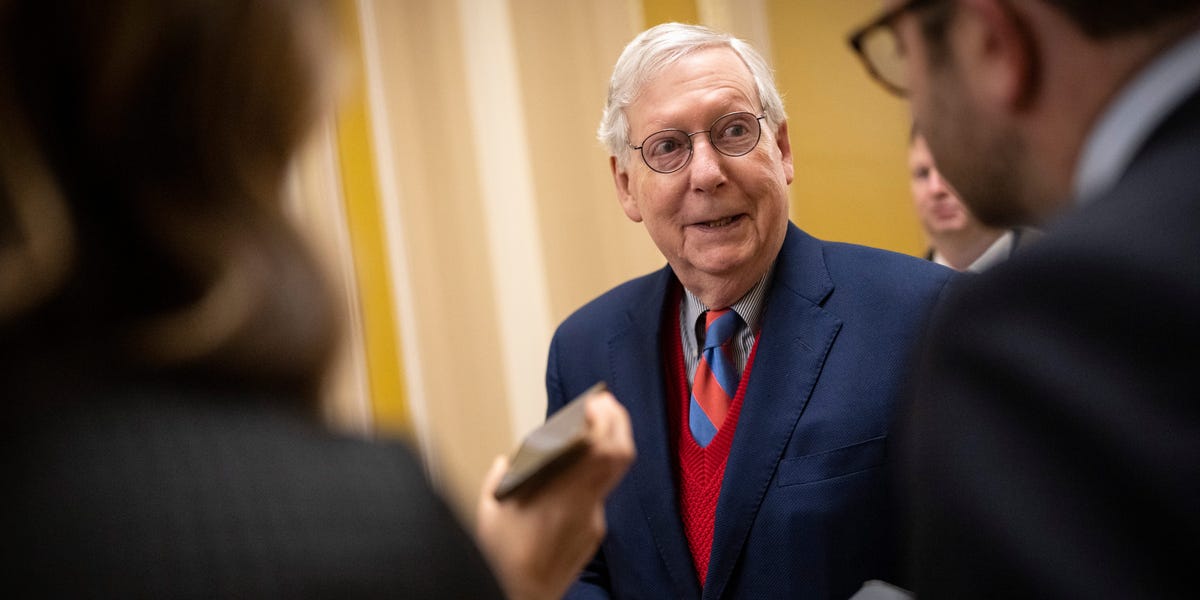 Trump blasts Mitch McConnell over passage of government funding bill, claiming 'Democrats must have something really big' on him

"The Marxist Democrats must have something really big on Mitch McConnell in order to get him and some of his friendly 'Republican' Senators to pass the horrendous 'All Democrat, All the Way' OMINOUS Bill," Trump wrote on his social media platform, Truth Social, referring to the so-called omnibus package.

The House and Senate last week approved the nearly $1.7 trillion bill to avert a government shutdown before the holiday recess. The legislation includes $772 billion for non-defense domestic programs and $858 billion for defense funding — increases from the current levels — in addition to $45 billion in aid for Ukraine and $40 billion in emergency disaster assistance, among several other provisions.

Both chambers passed the bill with bipartisan support. In the Senate, 18 Republicans, including McConnell, voted in favor of it. The Kentucky Republican hailed the bill's increase in defense spending, while still calling the legislation "imperfect."

"If Senate Republicans controlled this chamber, we would have handled the appropriations process differently from top to bottom," McConnell said last week. "But given the reality of where we stand today, senators have two options this week: We will either give our Armed Forces the resources and certainty that they need, or we will deny it to them."

Yet Trump, along with a slew of House Republicans, blasted the massive bill, arguing that a deal shouldn't have been reached until after the GOP took the House majority in January. House Minority Leader Kevin McCarthy sharply criticized the bill last week, calling it a "monstrosity" and "shameful." Only nine House Republicans voted for it.

"If the Old Crow waited just 10 days, the Republican Majority in the House could have made the 'Ominous' Bill MUCH, MUCH, MUCH BETTER," Trump wrote of McConnell on his social media platform. "Just another win for the Democrats, Mitch, that wouldn't have happened if 'Trump' were President!"

Trump's attacks come after McConnell recently criticized the former president over the GOP's losses in the 2022 midterm elections. McConnell, who's largely avoided weighing in on the former president since he left office, said that Trump's "political clout has diminished" in an NBC News interview published last week.

McConnell also told NBC that he vowed to "actively look for quality candidates" to endorse in the 2024 elections, pinning blame on Trump for promoting Republican candidates in key Senate races this year who ended up losing.

A spokesperson for McConnell did not immediately return Insider's request for comment.
#Donald Trump