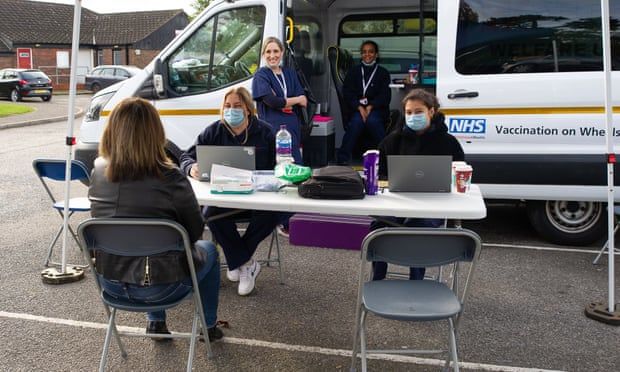 Sources say plans for travel restrictions being looked at, with 10m now having received third jabs

More than 10 million people in the UK have had Covid vaccine top-up shots, figures show, as government sources confirmed they are looking at plans for travel restrictions on people who do not take up the booster offer.

NHS figures for Sunday showed that 10,062,704 people in the UK had received a booster jab, or third shots for those with weakened immune systems, with the number in England reaching 8.5 million.

The milestone follows a record day for boosters on Saturday when more than 371,000 people in England had the jabs. About 30% of over-80s and more than 60% of people aged 50 and over have yet to receive the extra doses, however.

The health secretary, Sajid Javid, urged people to take up the offer of booster shots when they became eligible, describing the push as a “national mission” that would help the country “avoid a return to restrictions and enjoy Christmas”. 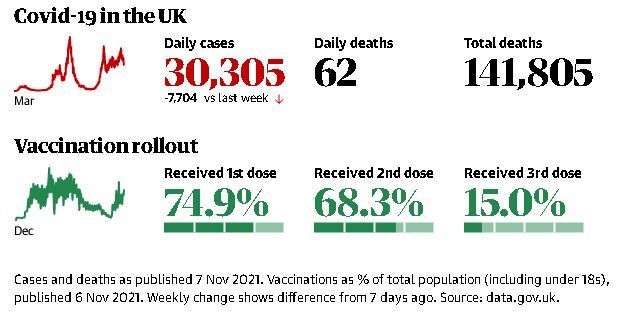 In a move that may further drive booster uptake, No 10 sources confirmed that ministers were considering a change in the rules on travel so that eligible people who had turned down a third dose would face quarantine and testing if they went abroad. The change was said not to be imminent.

This month official guidance was updated to say government was “reviewing the implications and requirements of boosters for international travel certification” and “looking at whether and how booster vaccinations could be included in the NHS Covid pass for travel”.

Currently, all over-50s, health and social care workers, and people who are clinically vulnerable are able to receive boosters six months after their second dose. On Monday, the booking system will change to allow people to arrange their appointment a month before they have the shot.

John Roberts, a member of the Covid-19 Actuaries Response Group, said while the number of people becoming eligible for booster shots was still growing faster than boosters were being delivered, the situation had improved in the past week.

“The really positive thing is the change that allows people to book their booster up to a month early. That will make a really big difference to things over the next few weeks,” he said. “I’ve been worried that we wouldn’t get all priority groups done before Christmas mixing takes place but I think this will make a big difference.

“The important thing for me is the number who are being jabbed is growing. The weekly rate is up to 1.8 million now, and I think we’ll see quite a step forward over the next two to three weeks as people take advantage of being able to book in advance. The only caution is we seem to be struggling to get some of the over-80s boosted and I think maybe these people are less mobile, and may rely on their GP contacting them and to go to a centre very close to them.”

Vaccines are highly effective at preventing hospitalisations and deaths but protection wanes over time, particularly in elderly people and at-risk groups. The booster programme aims to top up people’s immunity before an expected rise in cases in winter.

Evidence from Public Health England shows that protection against hospitalisation falls from 95% to 75% in the five months after the second shot of the Oxford/AstraZeneca vaccine, and from 99% to 95% for the Pfizer/BioNTech shot. Even small falls can have a major impact on hospitals, with a change from 95% to 90% protection against hospitalisation doubling the number of admissions in those vaccinated.