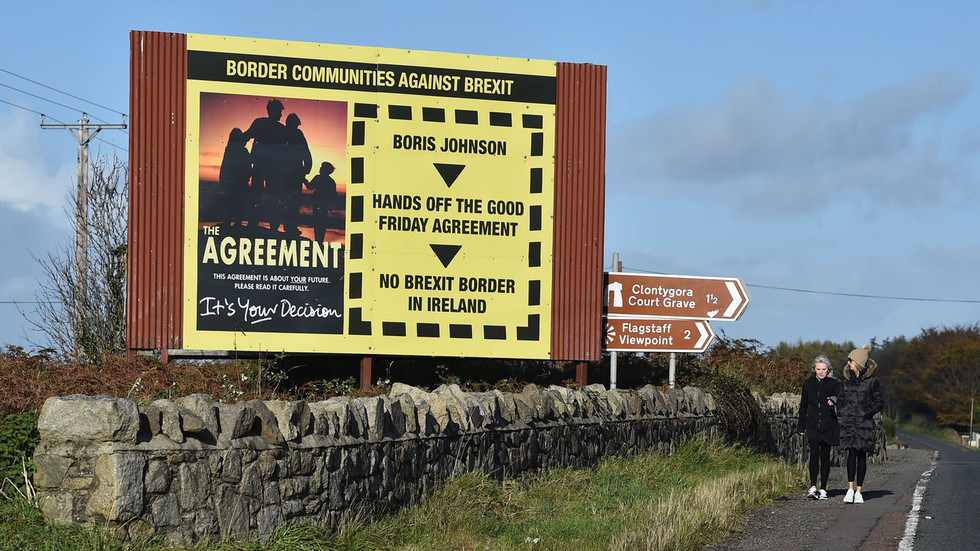 The final cut in partitioning Ireland came with the signing of the Anglo-Irish Treaty 100 years ago. That colonial division of a nation, conducted as a fait accompli by British rulers, continues to have harmful repercussions.
Ironically, it is today’s British rulers who are reaping the bitter fruit from the ongoing Brexit debacle with the European Union. The problem of an Irish border and its recurring messiness for the British Conservative government extricating from the EU is a direct consequence of London’s fateful decision to partition Ireland rather than grant full independence to the island.

A clear democratic mandate for independence was given in the general election of 1918, when all of Ireland was under British colonial administration. Across the island, pro-independence candidates belonging to Sinn Fein won over 70 percent of the seats. But rather than obeying the democratic will, London went to war. The War of Independence lasted for nearly three years until it was finally brought to an end by the Anglo-Irish Treaty signed on December 6, 1921 at Downing Street.

The treaty resulted in two jurisdictions: Northern Ireland, which comprised six counties, remained part of the United Kingdom, while the nascent Free State of 26 counties gained quasi-independence, first as dominion status within the British Empire, later to become the Republic of Ireland.

The British establishment justified this unprecedented act by pointing to a pro-British population in Northern Ireland, or Ulster as they erroneously referred to it. That pro-British constituency was created by historical colonization during the 16th and 17th centuries, when native Irish were dispossessed from their lands. Thus, the British rulers gerrymandered an island nation, which later was used to contrive a self-appointed mandate to carve up the country into nationalists and unionists.

During the early 1900s, when nationalist independence was welling up, the “Ulster Unionists” openly threatened to violently defy any possible move by London to grant Ireland freedom. The Conservative Party, led by Andrew Bonar Law, truculently supported the unionist declaration for armed rebellion against their own British government. “Ulster will fight and Ulster will be right” was the rallying call by the newly formed Conservative and Unionist Party, which continues to be its formal name.

When the Irish Republican leaders were in London negotiating the Anglo-Irish Treaty, this threat of large-scale unionist violence in the northern counties was used as leverage to force acceptance. The eventual signature by Michael Collins and his fellow delegates was condemned as a sell-out of full independence by Republican comrades.

The flawed treaty signed under duress led within months to a bitter civil war in the Free State, when former comrades murdered one another. Collins himself was assassinated in an ambush on August 22, 1922, in his native County Cork. That fratricidal war, in which the British armed the victorious Free State forces, left deep scars in the Irish memory until today.

Meanwhile, during the 1920s, the British territory of Northern Ireland saw widespread sectarian pogroms and thousands of families made homeless from the inter-communal violence. The Catholic, mainly nationalist population in the new northern state was suddenly made into a minority and subjected to decades of unionist-dominated government discrimination. That culminated in a massive outbreak of armed conflict in 1968, which lasted for three decades until a peace settlement was signed in 1998.

That peace deal is under renewed danger of collapsing over Brexit. The unionist parties in Northern Ireland and a vehement loyalist minority are objecting to the Brexit treaty signed by Boris Johnson’s government with Brussels, which makes all of Ireland part of the EU’s single market. That arrangement stems from London’s signature to the 1998 Good Friday peace accord, which removed a physical border.

However, the Johnson government and its chief negotiator, the unelected political appointee Lord David Frost, are demanding the EU scrap the Brexit treaty to avoid customs controls in the Irish Sea between Britain and Northern Ireland. By way of adding pressure on Brussels to make this concession, London is somewhat cynically suggesting that the Good Friday peace accord is at risk of collapsing from unionist dissent and simmering violence.

This has echoes of British rulers using the ‘Unionist Card’ to railroad their demands over Ireland and troublesome Irish questions. The real problem is the act of partitioning Ireland by London a century ago. That act of colonial midwifery gave birth to dysfunctional politics in Ireland. An independence movement was strangled. And the unstable constitutional deformity from partition has within it the seeds for potentially more political violence. Ultimately, however, Britain’s own politics, as seen from the Brexit imbroglio, continues to be haunted by the great misdeed perpetrated on Ireland.

There is only one solution: Ireland should have its full national independence after a century of malign British meddling.
#Boris Johnson  #Johnson