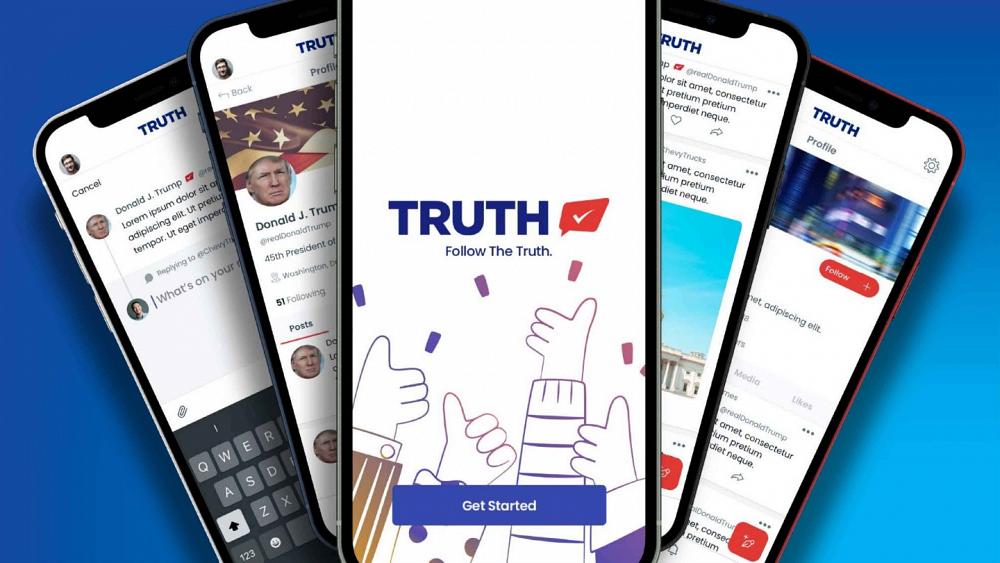 Is Donald Trump’s big comeback about sincerity and TRUTH? Here’s everything you need to know about this new social media platform.

On Wednesday, all eyes were turned on Donald Trump as he announced the launch of his social network after being banned in January from Twitter, Facebook and YouTube.

Named TRUTH Social, the new platform is presented as “America’s “Big Tent” social media platform that encourages an open, free, and honest global conversation without discriminating against political ideology” on its homepage.

The former US president’s latest creation was launched after the tech giants banned him following the January 6 riot at the Capitol, which he was accused of encouraging using his social media platforms.

But what does this comeback mean in the social media landscape?

Truth VS Tyranny of the Tech Giants

With TRUTH Social, the former President wants to "stand up to the tyranny of the tech giants", who have "used their unilateral power to silence dissenting voices in America", he said in a statement.

The platform will be owned by the newly formed Trump Media & Technology Group (TMTG), a structure that will also provide a video-on-demand (VOD) service and ‘non-woke’ podcasts, the statement said.

"We live in a world where the Taliban has a huge presence on Twitter while your favourite American president has been silenced. This is unacceptable," Donald Trump continued.

Five people died during or shortly after Trump’s supporters stormed the Capitol, during the President Biden certification ceremony. Twitter then banned Donald Trump indefinitely because of the “risk of further incitement to violence", cutting him off from his nearly 89 million followers.

Furious at no longer having access to his favourite megaphone, the former president promised to create a social network.

He briefly launched a blog in May, which was in fact a tab on his website where his press releases were collected, before shutting it down under the mockery of observers convinced that it was the promised social network, according to AFP.

Truth Social will be available as an invitation-only beta from November 2021, before a general launch in the first quarter of 2022, the statement said, noting that the app is already available for pre-order on the App Store.

Nothing but the Truth?

It should attract many supporters, some of which are convinced there was electoral fraud during the 2020 US election. It is on this base of supporters that the former president is counting to launch a possible new campaign in 2024, with a view to a return to the White House. To date, Donald Trump has only outlined his intentions, without ever confirming them.

But that’s not the only purpose for TRUTH. After conducting a business plan overview and sharing it openly, TMTG aims at offering videos on demand, and consequently become a direct competitor to Netflix, Disney+ and Amazon Prime.

The British news site The Guardian analysed TMTG’s ambitions by paying attention not only to the graphic skills, but also the lack of logic behind the slides.

“Their current approach to quantifying the media company’s potential audience seems to be more art than science,” The Guardian wrote.

“In one slide they look at how many people listen to podcasts and watch Netflix; from there they extrapolate that TMTG can get “potentially hundreds of millions of users”. 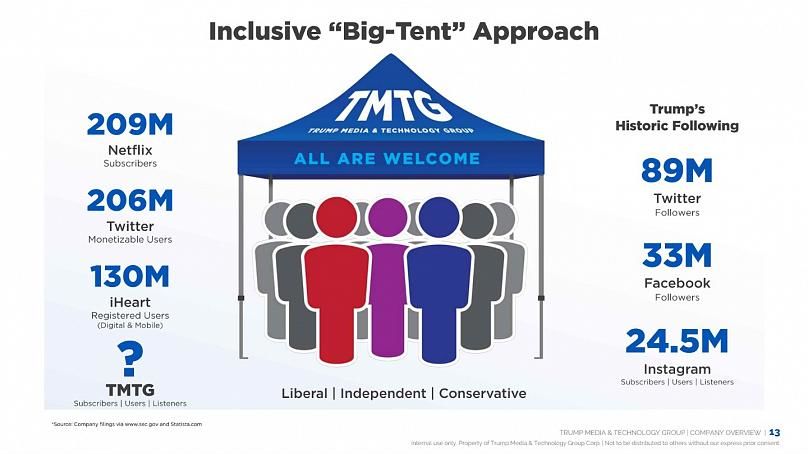 As for the economic plan, TMTG is to merge with Digital World Acquisition Corp (DWAC) in order to be listed, the statement said.

DWAC is a Special Purpose Acquisition Company (Spac), a company with no commercial activity whose purpose is to raise funds by going public and then merge with a target company that wants to be listed, in this case Donald Trump's new group.

DWAC is listed on the Nasdaq index and, according to the release, Donald Trump's new group would be valued at $875 million (€ 752 million). 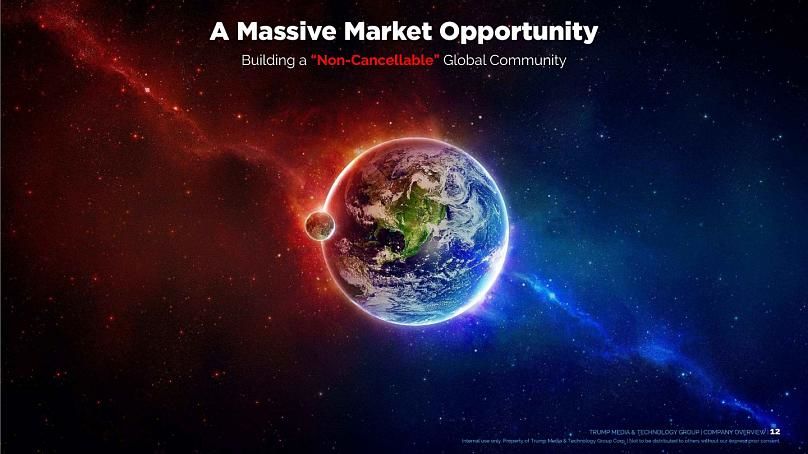 Barely introduced, already hijacked: a journalist from the American website The Daily Dot opened an account in Donald Trump's name once the URL to the TRUTH’s registration form was shared on the Internet.

Mikael Thalen, a specialist in social networks and data leaks, was able to create a profile using Donald Trump's famous Twitter photo and the username @donaldtrump.

The site was quickly taken offline and the account in Donald Trump's name deleted.

He was not the only one in this case, the French Huffington Post reported. Several conspiracy theorists and people close to Donald Trump suffered the same fate, with users quickly creating a fake account for them.

Among them, the son of the former head of state Donald Jr. was given a fake account, publishing offensive or vulgar images and messages before, once again, being deleted.

Another element Twitter users noted was the flagrant resemblance with another social media platform, Mastodon.

When reading the terms of service, TRUTH Social does not follow any of its fellow social media comrades though. Users must agree not to “annoy” any of the employees and not to “disparage, tarnish, or otherwise harm, in our opinion, us and/or the site”.