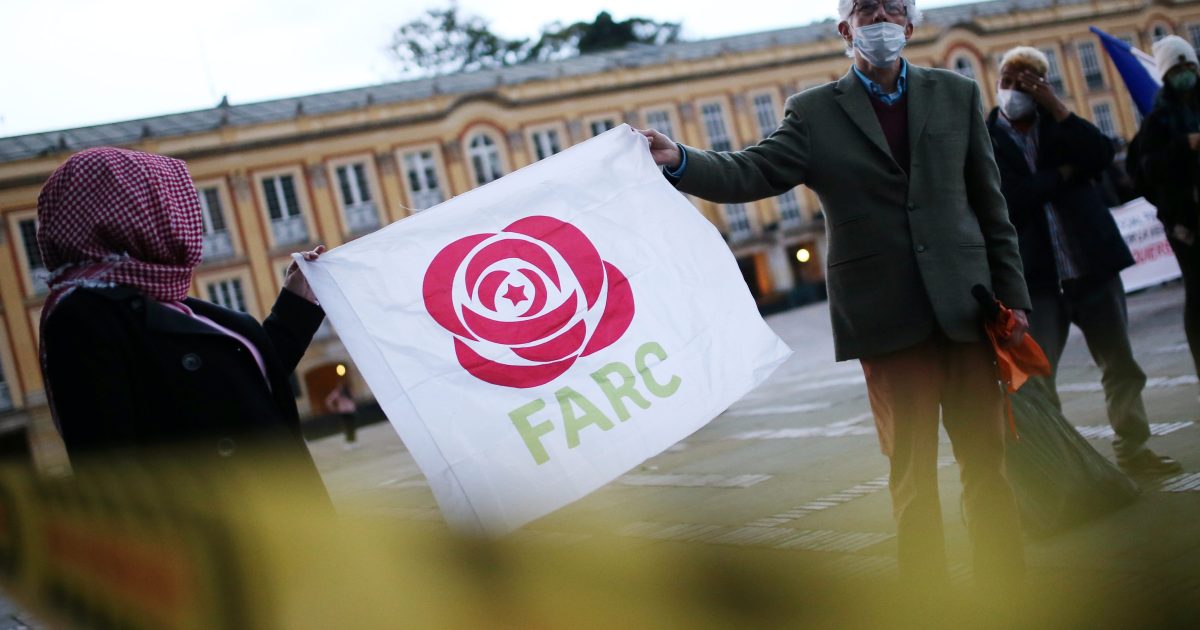 What next after Colombia’s FARC removed from US ‘terrorist’ list?

The Colombian rebel group’s delisting is an important step, experts say, but challenges to the country’s fragile peace remain.

The United States’ delisting of the now-defunct Revolutionary Armed Forces of Colombia (FARC) rebel group as a “foreign terrorist” organisation this week has been welcomed as an important – albeit delayed – step.

The addition of two FARC dissident groups to Washington’s blacklist may pose a fresh challenge to the implementation of a shaky 2016 peace agreement that ended five decades of deadly fighting in the South American nation, however.

Some political analysts say US President Joe Biden’s administration must tread carefully to ensure that demobilised FARC fighters are not affected by the new terrorist listing of dissident groups amid a surge in violence in Colombia.

“This decision is very important and very late,” said Elizabeth Dickinson, a senior Colombia analyst at the International Crisis Group, about the rebel group’s removal from the US “foreign terrorist” list on Tuesday.

Colombia this month marked the fifth anniversary of the peace agreement signed between the FARC and the government that led to the disarmament of some 13,000 rebel fighters. The demobilised FARC has since established a political party, Comunes, as part of that process, and Dickinson said the vast majority of ex-combatants remain committed to peace.

But she said the US “terrorist” listing had added to the widespread stigmatisation of ex-combatants in the Colombian countryside, posing a “major problem” as they try to reintegrate into civilian society.

“The fact that the US is only recognising that commitment to the process really five years later has sent a bad message throughout the implementation of the accord … that the demobilised FARC has not had the full support of the international community,” she told Al Jazeera.

“Thankfully … that is remedied and it’s very important that this sends a political message that the US is behind the political reintegration of the FARC.”

US Secretary of State Antony Blinken on Tuesday announced that Washington was delisting the FARC because the group “no longer exists as a unified organisation that engages in terrorism or terrorist activity or has the capability or intent to do so”.

Blinken said the decision does not change the US’s posture with regards to any charges or potential charges against former FARC leaders, including for narcotrafficking. It will, however, “facilitate the ability of the United States to better support implementation of the 2016 accord, including by working with demobilized combatants”.

Colombian President Ivan Duque said on Tuesday that his government understood the US move. “We understand it and we respect it,” Duque told reporters during a news conference. “We would have preferred another decision, but knowing that, today we are focused on confronting dissidents.”

Arlene Tickner, a professor of political science at Bogota’s Rosario University, said the symbolism of the announcement should not be underestimated, “given ongoing national and international criticism of the current Colombian government’s commitment to the peace process”.

Bogota has faced international criticism for its lackluster efforts in implementing the peace deal.

One of Duque’s election promises while the peace process was already underway was to try and change certain aspects of the final agreement and fight for tougher punishments for ex-FARC fighters through a special peace court. Lags in the delivery of promised government funding to former rebels to set up economic projects also have been reported, meaning many projects still have not come to fruition.

Against this backdrop, Tickner told Al Jazeera that the US delisting “constitutes an important step in terms of ex-FARC access to the financial system, availability for US assistance and interlocution with diverse US actors and institutions – all of which were severely restricted while the terrorist designation was in place”.

Dickinson also explained that being on the US blacklist impeded ex-FARC fighters’ ability to reintegrate – especially economically – into their new civilian lives. “Any company who thought to hire ex-combatants was putting themselves at great risk of US sanction, of not being able to interact with the banking system,” she said. 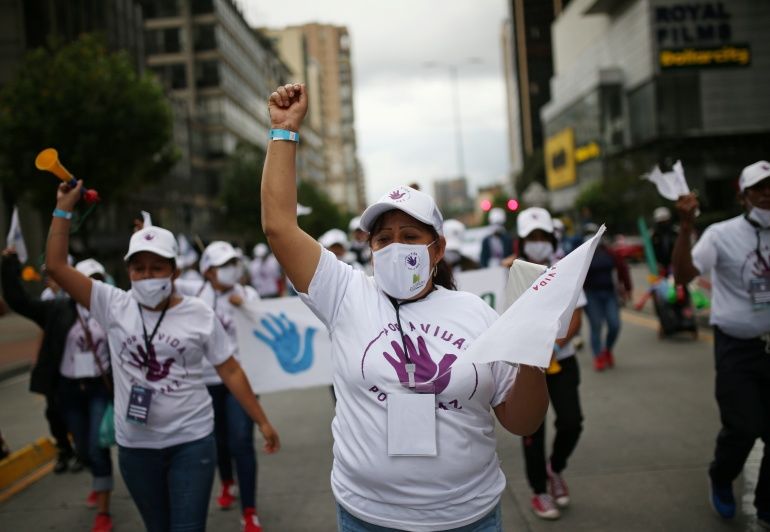 Former FARC fighters and their supporters participate in a protest demanding security guarantees and compliance with the peace agreement, in Bogota, November 1, 2020

Many former FARC members struggled to open bank accounts, as well, which made it very hard for those who sought to set up farming projects to formalise those programmes and build sustainable livelihoods.

“We’ve heard stories of cooperatives who’ve had to go from bank to bank, basically begging to be able to open an account for the cooperative, and it was this vast over-caution on part of the Colombian banking system to interact with these people in any capacity at all,” Dickinson said.

Alongside the FARC’s delisting, the Biden administration on Tuesday also announced the addition of two new dissident factions of the FARC who rejected the 2016 peace deal to its blacklist, dubbing their leaders “specially designated global terrorists”.

Some ex-FARC commanders and fighters picked up arms a few years after the deal was signed, accusing Duque’s right-wing government of being “traitors” after the president unsuccessfully tried to change some aspects of the agreement.

At the time, Duque had sought to get tougher punishment for FARC rebels at Colombia’s Special Jurisdiction of Peace (JEP), a special tribunal set up under the peace agreement to prosecute former FARC members and military officials for alleged crimes. Earlier this year, it accused eight former FARC commanders of war crimes and crimes against humanity.

“It’s very important that the US takes great care in implementing these new designations in order to avoid accidentally roping in demobilised ex-combatants who remain committed to the process,” Dickinson said about the new designations.

One of the most recognised names added to the US “terrorist” blacklist on Tuesday is Ivan Marquez, a former FARC commander. Marquez announced in August 2019 that the Segunda Marquetalia – the name of one of the new groups blacklisted – was taking up a “new phase of armed struggle” in the country. Last year, the US said it would offer a $10m reward for his capture.

Marquez, who is believed to be hiding in Venezuela’s border region with Colombia, gave an interview in local Colombian media on Tuesday morning – the first since his 2019 statement – asking for new talks with Bogota.

“We want a government that will go all out for peace, that resumes talks with the ELN, that opens a new chapter of dialogue with all the insurgent groups,” he said, referring to the National Liberation Army, an armed Marxist group operating in Colombia.

Colombia’s rural areas have seen increasing violence as several dissident groups, drug producers and traffickers, illegal gold miners and other smaller groups fight for control over the territories left behind by the FARC. It is also believed about 1,900 dissidents are operating from Venezuela, an army chief told the Reuters news agency in an interview on September 30.

On Tuesday evening, Duque commented on Marquez’s call for dialogue, calling him “a criminal, a terrorist, a narco-terrorist”.

“Peace for bandits like him is either to capture them or kill them, and the only thing that awaits him is the same fate as his counterpart Otoniel,” Duque said, referring to Dario Antonio Usuga, one of the country’s most notorious drug traffickers, who was captured in late October. The US requested his extradition this month.

Sergio Guzman, a Bogota-based political analyst, said Marquez’s announcement was like “blackmail to the government”.

“They themselves abandoned the [peace] process. And so now trying to renew agreements to this end feels counterproductive and it also gives a sense that they are not sincere in their efforts to find peace,” he told Al Jazeera.

“I don’t think the Colombian public has any sympathy … It just seems like Marquez and others are trying to be more relevant in the run-up to [next year’s] elections.”

Ultimately, Guzman said the US decision to remove the FARC from its terrorist list is “more of a formality” – and would not change many restrictions ex-members of the group continue to face, including on international travel or charges at the JEP.

“But beyond that their ability to capture votes elsewhere is practically nil,” said Guzman.

Tickner of Rosario University agreed. “While the [US] decision reinforces international recognition of ex-FARC legitimacy as a [legal] political actor, whether or not this translates at some point into greater national recognition and acceptance remains to be seen.”