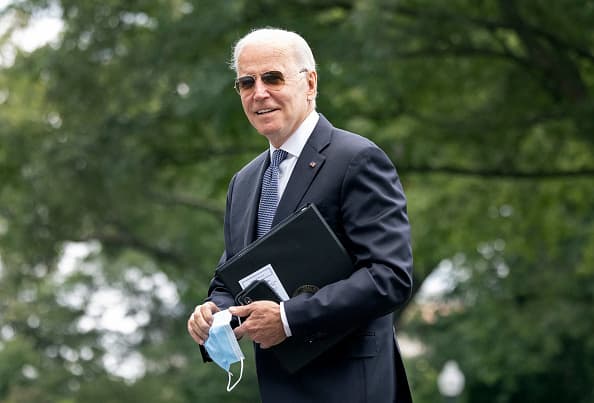 The White House weighed in – somewhat out of the blue – on a contentious battle over competing crypto amendments to the $1 trillion infrastructure bill. It's chosen to back the side that isn't as friendly to the world of bitcoin and ethereum.
The fight is over a provision in the bipartisan bill, which raises money through stricter tax rules on cryptocurrency transactions. Crypto advocates argued that the original language in the legislation, which requires brokers of digital assets to report on crypto trading gains, is vague and too broad. And now, amendments are circulating in order to narrow the scope.

On Wednesday, Sens. Ron Wyden, D-Ore., Pat Toomey, R-Pa., and Cynthia Lummis, R-Wyo. introduced an amendment that drills down on the definition of a "broker," explicitly excluding validators, hardware and software makers as well as protocol developers. It would be a win for the crypto caucus, should it pass.

In the other camp sits Sens. Rob Portman, R-Ohio – who drafted the original tax provision – along with Mark Warner, D-Va. and Kyrsten Sinema, D-Ariz. They submitted their own rival amendment on Thursday. CNBC does not have a copy of the proposed Portman-Warner amendment.

But based on prior revisions described by Portman, some believe it will leave the door open to a broader definition of "crypto broker" and will potentially subject more crypto investors to these higher taxes.

No one was expecting President Joe Biden to volunteer his take on this one, but late Thursday, the White House formally backed Portman's amendment in a statement attributed to deputy press secretary Andrew Bates.

"The Administration is pleased with the progress that has yielded a compromise sponsored by Senators Warner, Portman, and Sinema to advance the bipartisan infrastructure package and clarify the measure to reduce tax evasion in the cryptocurrency market," wrote Bates.

"The Administration believes this provision will strengthen tax compliance in this emerging area of finance and ensure that high income taxpayers are contributing what they owe under the law. We are grateful to Chairman Wyden for his leadership in pushing the Senate to address this issue, however we believe that the alternative amendment put forward by Senators Warner, Portman, and Sinema strikes the right balance and makes an important step forward in promoting tax compliance."

The last-minute endorsement of the Portman amendment was unexpected but not surprising.

Since its inception, the White House's vision for the infrastructure bill has been one in which corporations and the wealthiest Americans would fund improvements that benefitted everyone.

But Senate Republicans have a different idea, and over the past three months, they have cut tax hikes out of the bill one by one.

The crypto reporting rules and their related taxes represent the last vestiges of the corporate tax hikes that were supposed to pay for the bill.

Should the Portman camp win, Blockchain Association executive director Kristin Smith warns the ramifications will be sweeping and massively damaging to the country's crypto industry.

"At the eleventh hour, Sen. Warner has filed an amendment that is anti-technology and anti-innovation – and would be disastrous for the U.S. crypto ecosystem," wrote Smith.

"Removing protections for software developers – what Senator Warner's amendment aims to do and that is defined in the Wyden-Lummis-Toomey amendment – is a negative catalyst that will force crypto development and innovation out of the U.S. to friendlier, pro-technology jurisdictions," continued Smith.

The blowback to the White House's endorsement of the Portman-led amendment has been swift and harsh. Wyden, a liberal Democrat, and Lummis, a conservative Republican, have both pushed back, with Lummis issuing a direct call to action.

The Senate plans to vote Saturday on the bipartisan infrastructure bill.
#Joe Biden