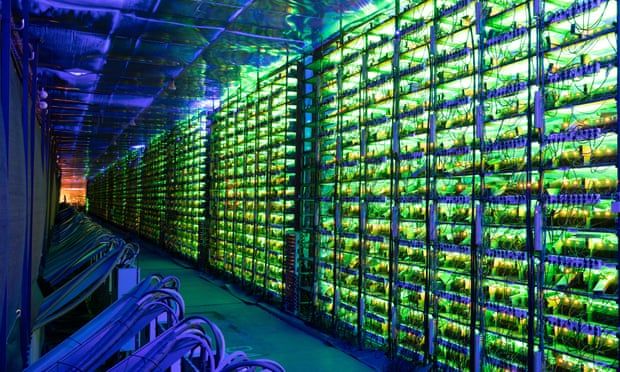 Will blockchain fulfil its democratic promise or will it become a tool of big tech?

Engineers are focused on reducing its carbon footprint, ignoring the governance issues raised by the technology
When the cryptocurrency bitcoin first made its appearance in 2009, an interesting divergence of opinions about it rapidly emerged. Journalists tended to regard it as some kind of incomprehensible money-laundering scam, while computer scientists, who were largely agnostic about bitcoin’s prospects, nevertheless thought that the distributed-ledger technology (the so-called blockchain) that underpinned the currency was a Big Idea that could have far-reaching consequences.

In this conviction they were joined by legions of techno-libertarians who viewed the technology as a way of enabling economic life without the oppressive oversight of central banks and other regulatory institutions. Blockchain technology had the potential to change the way we buy and sell, interact with government and verify the authenticity of everything from property titles to organic vegetables. It combined, burbled that well-known revolutionary body Goldman Sachs, “the openness of the internet with the security of cryptography to give everyone a faster, safer way to verify key information and establish trust”. Verily, cryptography would set us free.

At its core, a blockchain is just a ledger – a record of time-stamped transactions. These transactions can be any movement of money, goods or secure data – a purchase at a store, for example, the title to a piece of property, the assignment of an NHS number or a vaccination status, you name it. In the offline world, transactions are verified by some central third party – a government agency, a bank or Visa, say. But a blockchain is a distributed (ie, decentralised) ledger where verification (and therefore trustworthiness) comes not from a central authority but from a consensus of many users of the blockchain that a particular transaction is valid. Verified transactions are gathered into “blocks”, which are then “chained” together using heavy-duty cryptography so that, in principle, any attempt retrospectively to alter the details of a transaction would be visible. And oppressive, rent-seeking authorities such as Visa and Mastercard (or, for that matter, Stripe) are nowhere in the chain.

Given all that, it’s easy to see why the blockchain idea evokes utopian hopes: at last, technology is sticking it to the Man. In that sense, the excitement surrounding it reminds me of the early days of the internet, when we really believed that our contemporaries had invented a technology that was democratising and liberating and beyond the reach of established power structures. And indeed the network had – and still possesses – those desirable affordances. But we’re not using them to achieve their great potential. Instead, we’ve got YouTube and Netflix. What we underestimated, in our naivety, were the power of sovereign states, the ruthlessness and capacity of corporations and the passivity of consumers, a combination of which eventually led to corporate capture of the internet and the centralisation of digital power in the hands of a few giant corporations and national governments. In other words, the same entrapment as happened to the breakthrough communications technologies – telephone, broadcast radio and TV, and movies – in the 20th century, memorably chronicled by Tim Wu in his book The Master Switch.

Will this happen to blockchain technology? Hopefully not, but the enthusiastic endorsement of it by outfits such as Goldman Sachs is not exactly reassuring. The problem with digital technology is that, for engineers, it is both intrinsically fascinating and seductively challenging, which means that they acquire a kind of tunnel vision: they are so focused on finding solutions to the technical problems that they are blinded to the wider context. At the moment, for example, the consensus-establishing processes for verifying blockchain transactions requires intensive computation, with a correspondingly heavy carbon footprint. Reducing that poses intriguing technical challenges, but focusing on them means that the engineering community isn’t thinking about the governance issues raised by the technology. There may not be any central authority in a blockchain but, as Vili Lehdonvirta pointed out years ago, there are rules for what constitutes a consensus and, therefore, a question about who exactly sets those rules. The engineers? The owners of the biggest supercomputers on the chain? Goldman Sachs? These are ultimately political questions, not technical ones.

Blockchain engineers also don’t seem to be much interested in the needs of the humans who might ultimately be users of the technology. That, at any rate, is the conclusion that cryptographer Moxie Marlinspike came to in a fascinating examination of the technology. “When people talk about blockchains,” he writes, “they talk about distributed trust, leaderless consensus and all the mechanics of how that works, but often gloss over the reality that clients ultimately can’t participate in those mechanics. All the network diagrams are of servers, the trust model is between servers, everything is about servers. Blockchains are designed to be a network of peers, but not designed such that it’s really possible for your mobile device or your browser to be one of those peers.”

And we’re nowhere near that point yet.