A former X Factor contestant described as ‘pure evil’ for his ‘calm and calculated’ sex attacks on nine women over a 22-year period has been jailed for life
Serial rapist Phillip Blackwell had taped some of his victims’ eyes shut and filmed himself attacking young women after launching his first assault in 1997.

Warwick Crown Court heard how the sex offender, 56, ‘carefully targeted’ five of his victims – described as young vulnerable women – when they were walking alone in Birmingham, Coventry and Nuneaton.

The sentencing judge on Monday described Blackwell as ‘monstrous’ – adding: ‘Murderers aside, I can think of no more dangerous an individual that I have crossed in my 35 years in criminal law.’

Despite taking steps to disguise himself by putting on a ‘soft Irish accent’ and wearing a balaclava or mask while attacking his victims, the court heard how his fear of being caught did not match his desire for ‘notoriety and fame’.

Blackwell’s X Factor audition was broadcast as part of the 2008 series, but he failed to reach the finals.

Following on from his attacks in the late 1990s in the Midlands, the defendant then carried out a string of sexual offences on another four women in the Launceston area of Cornwall between 2005 and 2019.

As well as being jailed for life with a minimum term of nine years, the musician – who played in bands named AWOL, Missing People and Suspect – was put on the sex offenders’ register for life and ordered not to directly or indirectly contact any of his victims.

‘It is clear that you equipped yourself with a rape kit – a balaclava… tape for binding hands and covering eyes, and a camcorder to record for your later enjoyment.

‘It is clear that you have an appreciation for female anatomy but that seems to be the only regard you have for women.

‘You have no regard whatsoever for them as human beings or the impact for what you do to them. You must treat them with a level of contempt that is too shocking to even contemplate.’

The judge continued: ‘The harm that you have done with your selfishness is incalculable.

‘If you wanted to do it, to hell with everyone else, you would do it.

‘You are one of the most dangerous offenders. Murderers aside, I can think of no more dangerous an individual that I have crossed in my 35 years in criminal law.’

Describing Blackwell’s ‘predatory instincts’ while opening the case to the court, prosecutor Adrian Langdale QC said: ‘He’s a serial rapist whose campaign of abuse has spanned over 22 years.

‘He identified young females dressed in a particular way that he found attractive, followed them in his car… got in front of his victims and got into a place where he could carry out his attack. It was cold, calculated behaviour.’

Mr Langdale said some of Blackwell’s attacks were carried out on women who were unconscious, saying he ‘plied victims with alcohol in order to get compliance’.

The former X Factor hopeful often used ‘delusional terms’ while attacking his victims, as one woman was told: ‘If I met a girl like you, I would want to marry you. I want you to enjoy this.’ Another woman was told: ‘I’m not going to hurt you, we’re just going to make love if that’s OK?’

Blackwell told his first victim to ‘close her eyes and count to 100’ after he had finished attacking her, the court heard.

One victim managed to persuade Blackwell to remove his balaclava and not to rape her – as he said she ‘should be a social worker for talking him out of it’.

Victim personal statements of some of the women were read to the court, with one woman describing him as ‘pure evil’.

The court was told how one woman was left ‘feeling really horrible and dirty’ and how he had made her feel ‘frightened and nervous’. Another victim said she had ‘lived in fear for so long’ and one woman said the attack on her had had a ‘devastating and long-lasting effect’. 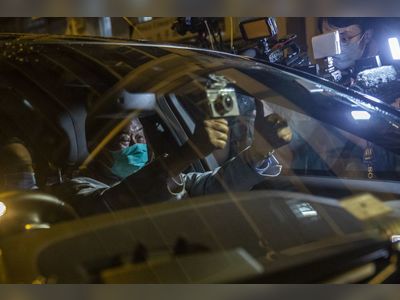