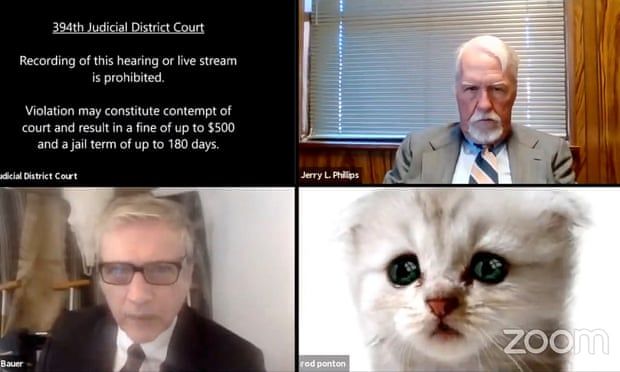 Zoom meetings mean you have to face your own face

Is that little flickery square in the corner of the screen the real me? By Eva Wiseman
Something has become clear. I need to face up to my face. I’ve taken precisely two selfies in my life, and have long shunned mirrors. My face is a thing that I wear on my head, for protection of health and projection of emotion, but for many years I’ve learned not to think too much about it for fear of drowning. The world’s self-image has been dramatically knocked by technology, by filters and apps that allow portraits to be edited smooth and slippery but, while I don’t want to boast, my personal shame was already fully bedded in long before I got a phone. For many years I was upset at not being pretty, feeling alternately cheated and sad, but over time I came to terms with it, deciding to avoid mirrors, photos, and to store that prickly energy elsewhere. I look in the mirror once a day, to draw on eyeliner, which establishes a boundary and also nods to heroines, and to paint over blemishes, sometimes highlighting them by accident, but by that point the game is already up.

And then pandemic and then lockdown and then Zoom. And then my face, floating on screen, pink and awkward, and the mouth doing that thing. At first it was a new kind of hell. I thought about the Sylvia Plath poem written in the voice of a mirror reflecting on her reflection, two years before Plath died – “In me she has drowned a young girl, and in me an old woman / rises toward her day after day, like a terrible fish.” A terrible fish. Soon we were all talking shriekingly at the beginnings of meetings about the horror of meeting ourselves, and then there was a calm moment as we fiddled with the filters, and then all of a sudden nobody mentioned it again, the distraction of seeing your face as it moves, because it wasn’t funny any more.

I’m going back to the office this month after nearly 2,000 years at home on my biscuit-crumbed laptop, and the prospect of talking to my colleagues in real life, just me and them without myself has spurred me to pick the meat off the problem. Before now I rarely saw myself in action – perhaps the odd flash in a train window as we went through a tunnel, or in the background of a video mooing at the baby. Today, though, looking at my face is a large slice of my life. And I wonder, why is it so disturbing, watching yourself be watched?

There we are vibrating in our little squares, our roots getting greyer over the course of the hour, our eyes being dragged back to our own eyes, however interesting the story we’re being told. There are certain things we’ve learned to ignore in order to move more gently through our lives, and one of them is that, for all our inner selves, our special thoughts, our soul, much of our identity is formed from how we appear to other people. And it becomes clear through these online meetings that there’s only so much we can do to manipulate that. Are we showing them the person we want to show? Do we pass? As intelligent? As human? Can they see we’re pretending to care? If I narrow my eyes, does it show that I’m listening, or do I look like I’m planning their death? The fragility of our unfinished selves is revealed up there, to the right.

It is odd, isn’t it, to witness yourself? It’s actually a little much, to be confronted by your moving mouth as you are moving it, by this mirror you, this version of a person you’ve been working on since your teens. “Turn off the camera!” someone will say, “Put a thing over the screen!”, when you’re halfway through your monotone monologue about the ills of modern life, but it’s not that simple. You see, I have tried that. In lieu of a Post-it I crafted a small curtain, quite elegant, from paper and Blu-Tack, but what happened unfortunately was my body thought I’d died. My poor heart, having become accustomed to watching this face it’s been uncomfortable supporting all its life, watching it nod sagely at interviewees and roll its eyes at mothers and gaze blankly as a meeting drips on, told the rest of the body to panic, as it appeared we no longer existed. I pulled off the paper to see fear and sweat, hair anguished, eyes round. So nope, that didn’t work!

Why can’t I look away? Is it the same as with comments, those insults that laze underneath my contributions to the wet leaflet that is the internet, where simply ignoring them does not stop me fretting, because I know that they’re still there, for everyone else in my life to browse at leisure? Do I look at my face to make up for the lack of daily looks in my old life, the casual nods and grins that kept me stable? I wonder.

And I wonder again, suddenly, whether I’ll miss me. Whether, when I turn off video calls and return to my largely mirrorless life, I will yearn slightly for the face I left behind, with its quite tired eyes and suspicious grin. Will I appreciate that awkward face for the first time? If I can no longer see myself talking thickly, will I wonder if I am still there, behind the Post-it? I have my eyeliner on and I’m ready to find out.