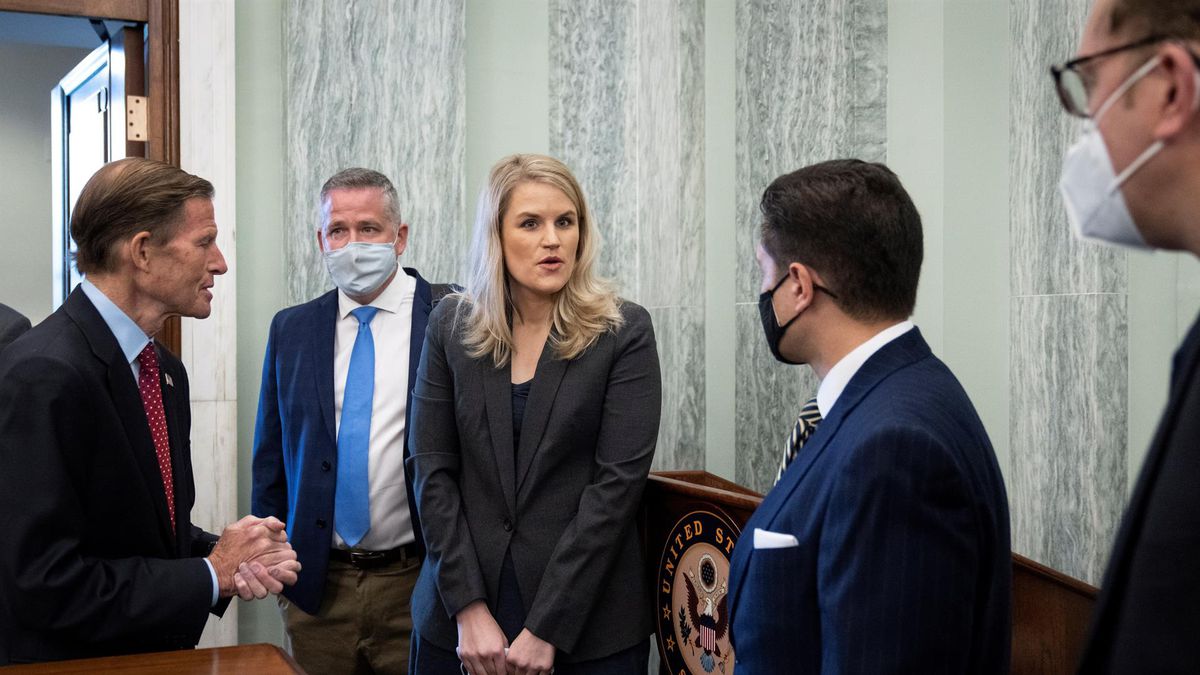 Facebook whistleblower calls for regulation of the company before US lawmakers

Frances Haugen revealed a huge archive of internal investigations detailing how Facebook knew its sites were potentially harmful to the mental health of young people.

A Facebook whistleblower appeared before US lawmakers on Tuesday to call for the social media giant to be regulated, a day after a massive blackout affected billions of users and revealed global dependence on its services.

Former employee of the social network Frances Haugen testified on Capitol Hill after leaking to authorities and The Wall Street Journal a huge file of internal investigations detailing how Facebook knew that its sites were potentially harmful to the mental health of young people.

Haugen spoke to senators a day after Facebook, his photo-sharing app Instagram, and messaging service WhatsApp were down for about seven hours, affecting "billions of users," according to tracker Downdetector.

Haugen warned in a pre-prepared speech of the risk of not creating new safeguards for a platform that reveals little about how it works.

"I believe that Facebook products harm children, fuel division and weaken our democracy," he stressed. "Congress needs to act. This crisis will not be resolved without your help."

In her testimony, Frances Haugen points out the danger of power in the hands of a service that has become necessary in the daily lives of so many people.

"The company intentionally withholds vital information from users, the US government and governments around the world," Haugen's statement read. "The severity of this crisis demands that we move out of our previous regulatory frameworks."

Facebook has strongly opposed outrage over its practices and their impact, but this is just the latest in a series of crises to hit the Silicon Valley giant.

For years, US lawmakers have threatened to regulate the business of Facebook and other social media platforms in response to criticism that tech giants invade privacy, serve as a megaphone for dangerous misinformation and harm the well-being of young people.

After years of strong criticism of social media, without major legislative revisions, some experts were skeptical of the possibility of a change from Congress.

"It will have to come from the platforms, which feel pressure from their users and their employees," Mark Hass, a professor at Arizona State University, told AFP.


Frances Haugen, a 37-year-old data scientist from Iowa, has worked for companies like Google and Pinterest, but - in an interview Sunday with CBS news program "60 Minutes" - said Facebook was "substantially worse. "Than everything I had seen.

Facebook's vice president for global affairs and politics, Nick Clegg, vehemently rebutted Facebook's claim that its platforms are "toxic" to teens, days after a tense, multi-hour hearing in Congress in which US lawmakers questioned the company on its impact on the mental health of young users.

Late on Monday, Facebook blamed the blackout on configuration changes it made to the routers that coordinate network traffic between its data centers.

"This disruption to network traffic had a cascading effect on the way our data centers communicate, causing our services to stop," Facebook's VP of Infrastructure Santosh Janardhan said in a post.

In addition to the blackout for people, businesses and others who depend on the company's tools, Facebook CEO Mark Zuckerberg took a financial hit.

Some people were glad that Facebook tools were down, but others complained that the outage caused them professional and personal problems.

"I love Instagram. It is the application I use the most, especially for my work," Millie Donnelly, a network administrator for a non-profit organization, told AFP.

"So professionally, it's definitely a step backwards. And then personally, I'm just always on the app."