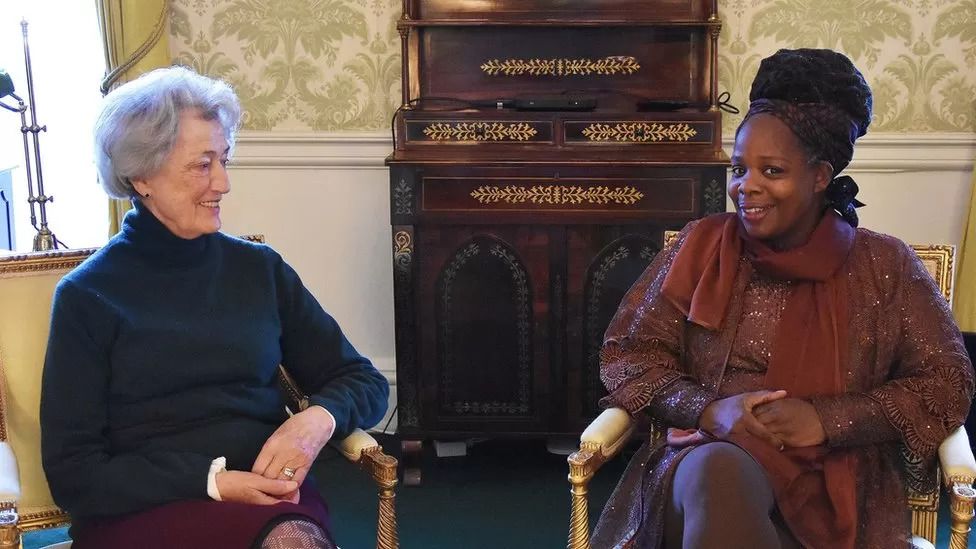 Lady Susan Hussey has given a personal apology to Ngozi Fulani, after asking her where she was "really from" at a Palace reception.
Lady Susan, a former lady in waiting, met black British charity boss Ms Fulani at Buckingham Palace on Friday.

She offered her "sincere apologies for the comments... and the distress they caused", said Buckingham Palace.

A statement said Ms Fulani had accepted the apology and recognised the comments had not been malicious.

Ms Fulani, founder of the Sistah Space charity, was a guest at a Buckingham Palace reception last month when she described Lady Susan moving her hair to see her name badge, and challenging her to explain where she was "really from".

Lady Susan, a godmother to Prince William, asked what part of Africa Ms Fulani was from, despite Ms Fulani explaining that she worked in London and had been born in the UK.

Ms Fulani felt that she had been "interrogated" at the reception hosted by the Queen Consort for those working to tackle domestic abuse.

Following the controversy, Lady Susan, aged 83, stepped down from her honorary palace role.

The row prompted Prince William's spokesman to say that "racism has no place in our society".

In a joint statement issued with Ms Fulani, Buckingham Palace described Friday's reconciliation between the two women as "filled with warmth and understanding".

Lady Susan has "pledged to deepen her awareness of the sensitivities involved" and the Royal Households would continue to "focus on inclusion and diversity", the statement said.

The Royal Households also made a commitment to training programmes, including "examining what can be learnt from Sistah Space".

There was recognition that Ms Fulani had "unfairly received an appalling torrent of abuse on social media".

Last week the Sistah Space domestic abuse charity said it had ceased many of its operations because of concerns over safety.

The statement on Friday said both Lady Susan and Ms Fulani wanted their meeting to show that "resolution can be found with kindness, co-operation and the condemnation of discrimination wherever it takes root".

Buckingham Palace will have wanted to draw a line under what had been an embarrassing row. And King Charles and Camilla, the Queen Consort, were said to have been kept informed and welcomed the outcome.
#Prince William