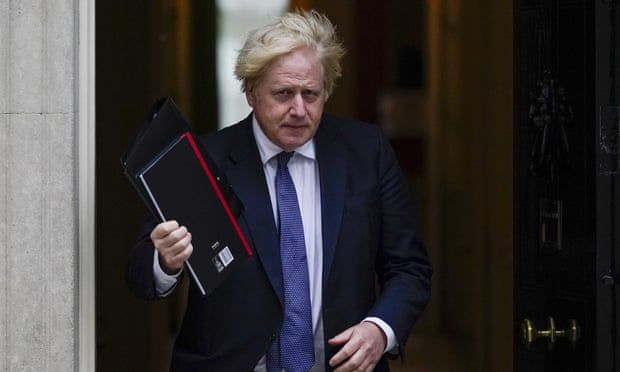 Trump officials tried to convince him to take threat seriously and British experts ‘oddly pessimistic’ on defeating virus, says book
US officials thought their British counterparts “were out of their minds” in aiming for herd immunity as part of Boris Johnson’s initial policy on dealing with the coronavirus, according to a new book about the global response to the pandemic.

As the scale of the threat became increasingly clear in January and February 2020, officials in Donald Trump’s administration were trying to convince him to take the threat seriously, despite personal reassurances he had been given by the Chinese president, Xi Jinping, that it was under control.

But they were even more shocked by the approach being taken in the UK. In a book to be published next Tuesday, Aftershocks: Pandemic Politics and the End of the Old International Order, British health experts at the time are described as being “oddly pessimistic about their capacity to defeat the virus”, rejecting measures such as a ban on mass gatherings.

“We thought they were out of their minds. We told them it would be an absolutely devastating approach to deal with the pandemic,” one US official told the authors, Thomas Wright, a foreign affairs expert at the Brookings Institution, and Colin Kahl, who is now under secretary of defence for policy. “We thought they were nuts and they thought we were nuts. It turns out, in the end, we were a little more right than they were.”

It was Trump who was persuaded to change course first, reluctantly agreeing to a three-week shutdown on 11 March, at a time when 150,000 people were attending the Cheltenham horse racing festival in Britain.

But Trump and his secretary of state, Mike Pompeo, were to shape America’s international response around the desire to see China punished, rather than building an international coalition to contain the spread of the virus.

Trump felt he had been betrayed by Xi. “These guys have fucked us and they fucked me personally,” he told his staff, according to the authors. He started insisting the disease be referred to as “the China virus”.

The book also describes the breakdown in attempts to build a concerted G7 response to the outbreak. France, which was handing over the rotating group presidency to the US, sought guidance from Washington on the administration’s intentions but it came as a shock to French officials “that the White House had no ideas of its own”.

Paris asked the administration for a call among G7 leaders. The White House agreed, but only on condition the French organise it. Then, when G7 foreign ministers convened by videoconference on 26 March, they were unable even to agree on a joint statement due to Pompeo’s insistence that references to Covid-19 be replaced by the “Wuhan virus”.

Johnson and the French president, Emmanuel Macron, backed Trump’s call for an in-person G7 summit at Camp David in the summer, which the US president saw as a way to show leadership and demonstrate that things were getting back to normal.

But the plan was torpedoed by Angela Merkel’s decision not to attend. According to Aftershocks, the refusal was only partly motivated by the German chancellor’s concern about the health risks of an in-person summit. She also thought her mere presence would be counterproductive to reaching agreement because of Trump’s viscerally hostile reaction to her.

“She was the red cape to his bull,” the book said. “When they spoke, he went off the rails. All she had to do was be in his presence.”

Merkel told Trump of her decision not to come Camp David on 28 May and he reacted furiously, yelling and then hanging up on her. The president then announced the summit would be canceled and called into question the G7’s relevance, using the occasion to repeat his earlier calls for Russia to be readmitted.

For the UK, the suggestion of a Russian return was a red line, while French officials concluded that the administration had no intention of rallying an international response to the pandemic.

“​​With the Europeans now fully estranged from the United States, for all practical purposes the G7 ceased to exist,” Wright and Kahl argue. “As Covid-19 swept through every part of the world in 2020, it would be every nation for itself.”
#Boris Johnson  #Angela Merkel  #Donald Trump  #Coronavirus  #COVID-19  #Johnson  #Covid