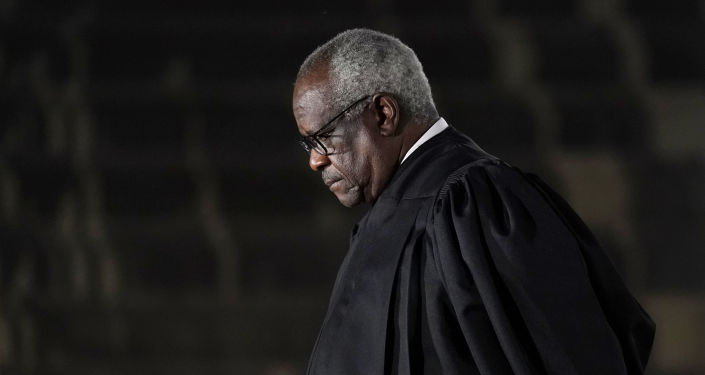 In 2019, the 2nd US Circuit Court of Appeals found that former US President Donald Trump violated the First Amendment when he blocked certain Twitter users. At the time, lawyers for the blocked users argued the account was an official source of information about the government, and that blocking amounted to illegally silencing their speech.

US Supreme Court Justice Clarence Thomas on Monday dismissed a previous ruling from a three-judge panel, arguing that Twitter’s January ban of Trump exposed the potential abuses of its legal protection.

Thomas specifically criticized Section 230 of the Communications Decency Act, explaining in his ruling that the right to cut off one’s speech “lies most powerfully in the hands of private digital platforms.”

As Trump is no longer in office and Twitter has permanently banned him, the Supreme Court ruled that the case from the 2nd US Circuit Court of Appeals should be tossed and dismissed as ‘moot’ or no longer active.

Section 230 of the Communications Decency Act is a decades-old law that protects technology companies from lawsuits and provides platforms wide range control over speech on their sites.

Highlighting the amount of control Big Tech companies like Facebook and Google have over online marketplaces, Thomas compared the platforms to common carriers and warned they should be “regulated” in a manner similar to telephone companies.

"It changes nothing that these platforms are not the sole means for distributing speech or information. A person always could choose to avoid the toll bridge or train and instead swim the Charles River or hike the Oregon Trail," Thomas wrote in his decision. "But in assessing whether a company exercises substantial market power, what matters is whether the alternatives are comparable. For many of today's digital platforms, nothing is."

Mentioning names such as Facebook CEO Mark Zuckerberg, Thomas argued that while such tech platforms provide unprecedented amounts of opportunity for speech, it also concentrated control “of so much speech in the hands of a few private parties.”

Daphne Keller, a former general counsel for Google, blasted Thomas’ stance and told NPR that ignoring a long history of cases that have upheld platforms’ First Amendment right to police troubling content is both “ignorant” and “intellectually dishonest.”

Twitter’s decision to ban Trump created a contentious debate online over the issue of freedom of speech and the power that private companies exerted in the situation where a sitting US president could be deplatformed.

This is not the first time Thomas has called on the government to review Section 230. In a court order from 2020, Thomas claimed that placing no limits on an internet company’s discretion to take down material can in turn protect companies who “racially discriminate in removing content.” At the time, Thomas cited the court case Sikhs for Justice, Inc. v. Facebook Inc., in which the Sikhs for Justice company sued Facebook for blocking access to their page in India.